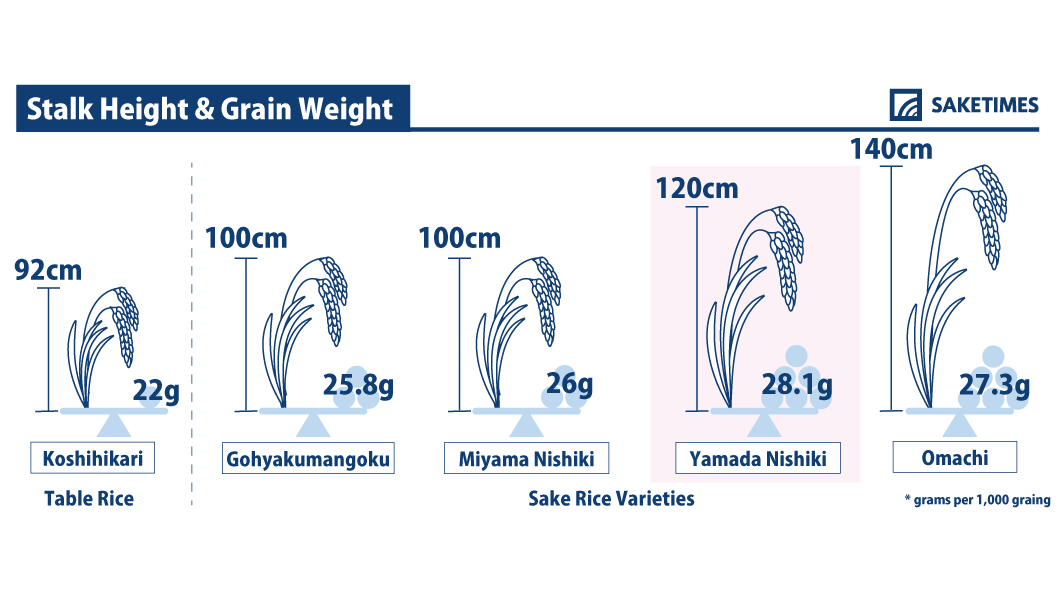 1. Undisputed King
While not the first on the scene, Yamada Nishiki is more-or-less considered to be the undisputed king of sakamai; varieties of rice which have been optimized specifically for the purpose of brewing sake. Officially born in 1936 from the rice strains Yamadaho and Tankan Wataribune in Hyogo Prefecture, Yamada Nishiki is now being grown in a majority of regions throughout Japan, however Hyogo-grown Yamada Nishiki makes up roughly 70% of all Yamada Nishiki in use today.

Despite significant efforts to improve upon the rice’s traits and create better varieties more suitable for specific regions throughout Japan, Yamada Nishiki has held the title of being the most sought after and utilized sakamai for over 80 years.

2. Not “What”, but “Where” and “How”
Despite the dominance of Yamada Nishiki and its nearly universal adoption, it actually seems that where the rice is grown is considerably more important than the variety itself. Due to the rice’s malleable nature, while just about any Yamada Nishiki will “suffice” even in the hands of the less-experienced crafts(wo)man, the key to great sake seems to be linked to great Yamada Nishiki in combination with skilled hands. Within Hyogo, Yamada Nishiki grown in what are referred to as “special A rank” rice fields seem to be the secret weapon.

Looking at the chemical composition of different rice varieties, not only does Yamada Nishiki hardly differ from other sakamai, it’s difference in comparison to standard japonica varieties of table rice also appears insignificant. This has led brewers and consumers to the conclusion that, in introducing Yamada Nishiki to the sake world, Hyogo Prefecture also happened to hit upon a variety uniquely suited to the region’s soil and specific micro-climate. Between this discovery, and the rice’s unique suitability for crafting gingo-style sake, a king ascended the throne.

3. Changing of the Guard?
The dominance of Yamada Nishiki isn’t likely to pass any time soon, but there are small signs of change. A large part of the rice’s success and reason for its adoption has been how it is uniquely suited to crafting ginjo-style sake – which grew in popularity with the expansion of the variety – where rice is polished to below 50% and fermentation takes place at a very low temperature.

Yamada Nishiki has proven ideal under these specific conditions, but as emphasis slowly shifts away from the strong aromatics associated with the ginjo style, and more producers concern themselves less with emphasizing a low polishing ratio, the benefits of Yamada Nishiki are likely to diminish and the opportunity for other varieties of sake rice to demonstrate their prowess under yet-unexplored conditions is gathering industry attention and research.

Some argue that the reason sake crafted from Yamada Nishiki is so delicious is not so much because of the nature of the rice itself, but because sake brewing skill and technology over the last 80+ years developed around the sakamai as a standard, therefore also resulting in diminishing skill and understanding as to how to make the most of other rice varieties. As breweries gradually return to “local” and strive to differentiate their style (as opposed to assimilate, which was the trend for the past several decades), it’s possible that, while not necessarily a new “king”, we could very well see the birth of several new princes and princesses in the coming years.

Learn More>>What is the Rice Polishing Ratio?
Learn More>>The ingredient of sake: Shuzokotekimai
Free Sake Infographics:Feel free to download and use them freely from here to help you learn more about sake!