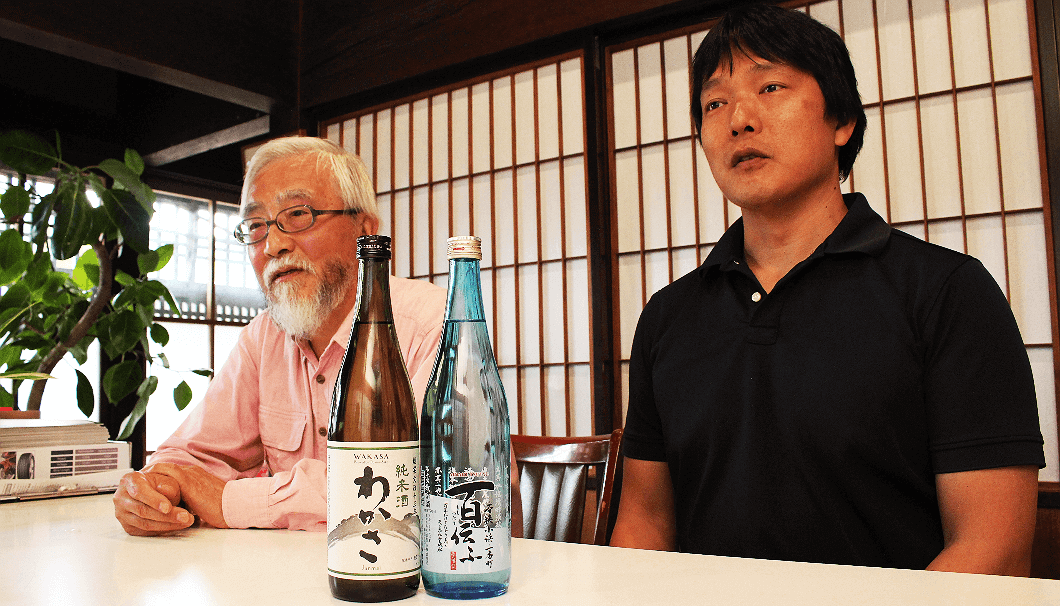 Stories abound of age-old sake breweries in Japan passing leadership to younger generations. Obama Brewery in Fukui Prefecture, though, went the extra mile and applied for a new license under the relentlessly rigid National Tax Agency. Here’s how they did what most in the industry call “impossible.”

From Yoshioka Brewery to Wakasa Fuji

Yoichi Yoshioka’s ancestors had been dealing in sake for generations in and around the port town of Obama, a historical trading hub on the coast of Wakasa Bay. In 1830, both the matriarch and patriarch of the Yoshioka clan ran separate breweries in the area, cementing the family lineage as one of a “sake family” for generations to come . 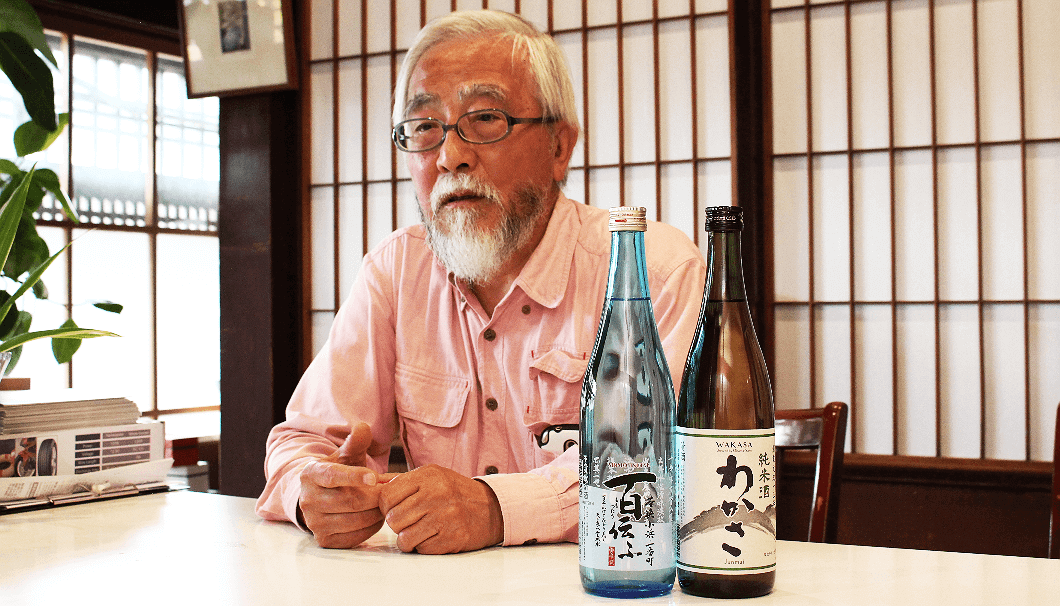 There was a great sense of flexibility in both family businesses. Yoshioka Brewery also dabbled in construction supplies on the side, and in 1962 as the sake market was soaring, Yoichi’s uncle suggested both operations merge, to prevent family members competing with each other over such a small region.

The merge took place, and the new brewery was named Wakasa Fuji. But by the end of the 70s, the sake business was contracting, putting the squeeze on breweries across Japan – especially those in smaller local regions like Wakasa Bay. By the 2000’s, Wakasa Fuji was the only sake producer in the region, but even it was suffering from financial burdens.

From Software to Sake

Meanwhile, Yoichi himself had stayed out of the sake business altogether, opting instead to go into software sales. Nonetheless, when he heard of his family’s problems back home, he decided to head back to pitch in. He figured that the key to saving Wakasa Fuji was to expand its sales beyond the immediate rural area.

He enlisted the help of his son-in-law, Akiteru Takaoka, who was taking part in an event promoting traditional Japanese architecture in Singapore at the time. Yoichi and Akiteru transported 200 bottles of Wasaka Fuji’s sake to try and sell to Singaporeans there. “I figured that people interested in old Japanese homes would also be interested in sake,” Yoichi told SAKETIMES. “I thought there could be a breakthrough if we introduced it to other markets.”

Regardless of whether Yoichi’s plan had succeeded or not, it was enough to impress the president of Wakasa Fuji, who had previously resisted succeeding his brewery. With a sense of new hope, he approached Yoichi and Akiteru to take over Wakasa Fuji in 2015.

“You Know, You Chose the Hardest Possible Way to Do This…”

The two men accepted the offer and began planning how the succession would work. In most situations, a brewery is either handed down to a family member or employee, or it’s sold with the brewing license simply changing hands in the process. Because of Wakasa Fuji’s financial situation, however, the inexperienced new brewers would be even more handicapped by its burdens.

So instead, they decided to start a new brewery from the ground up and call it Obama Brewery, after the city itself. The challenge here was to acquire a new sake brewing license and that was no small feat. Most sake brewing insiders would be quick to point out that getting a license in the tightly regulated industry is virtually impossible to do.

“The man at the National Tax Agency (NTA) gave me a wry smile and said ‘You know, you chose the hardest possible way to do this,’” recalled Yoichi. “I didn’t know if it’d work, but it was worth trying.” 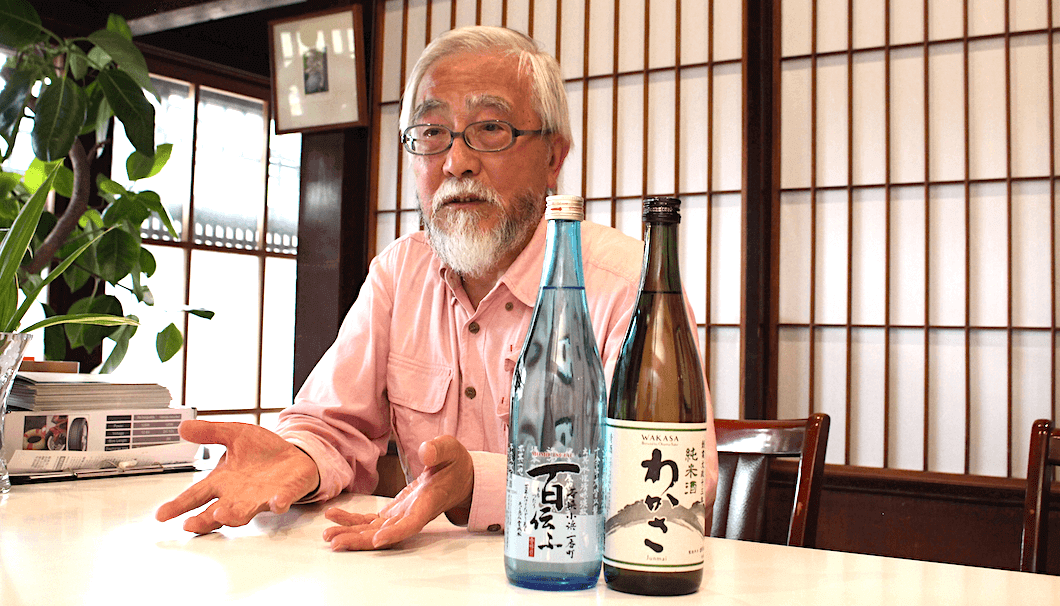 The NTA inundated Yoichi and Akiteru with application forms and requests for documentation. They were also asked why they wanted to start a brewery and if they could continue with such a business. Luckily, Yoichi’s connection with Wakasa Fuji and its heritage helped; he even submitted a family tree as a supporting document.

Even so, the procedure hit a wall with regards to an actual brewery. Obama Brewery would have to be built from the ground up, and in order to get a license, be capable of producing 60,000 Liters (15,800 gallons) of sake a year. That would require a large amount of capital. 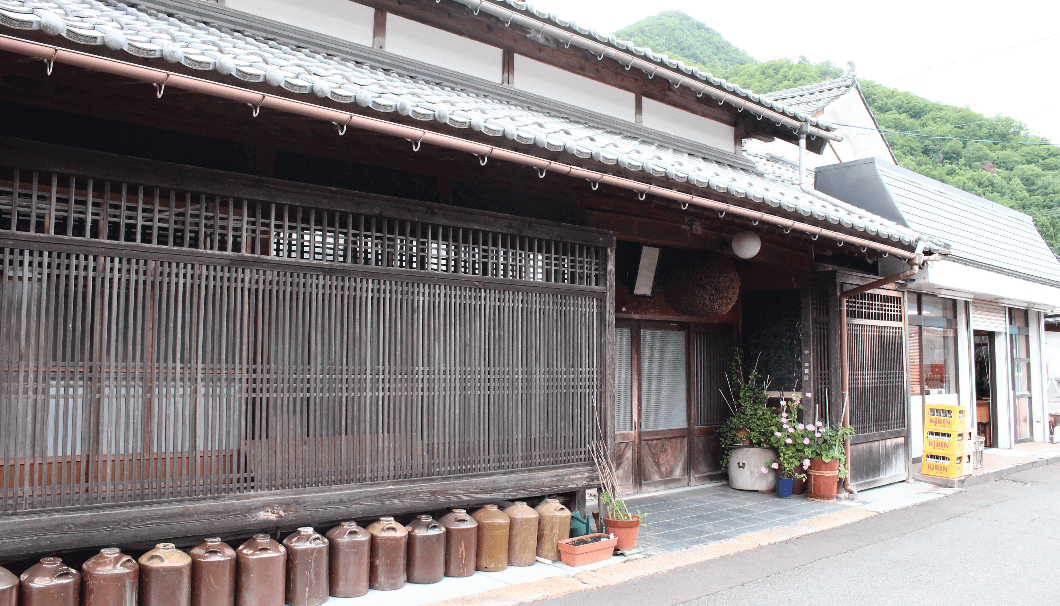 This created a Catch-22 in which the men would need a loan to purchase the equipment to make the sake, but would also need a license before they could get a loan. In order to break this deadlock, they sought the help of the Obama City government, even meeting with the mayor himself.

After the men pressed the fact that sake brewing was about to become extinct in the area, the city told them about certain subsidies that could help. Ironically, those too required a license before they could be given out. 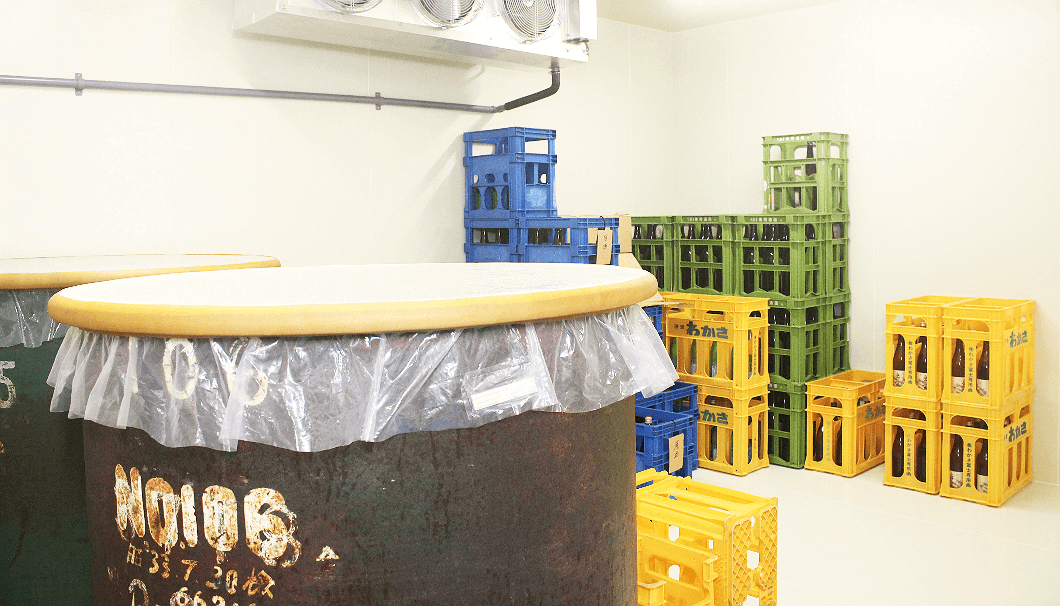 Refusing to give up, Yoichi and Akiteru continued to try and break through the red tape with constant negotiations with the NTA, banks, and Obama City. Their efforts eventually paid off and after one and a half years of talks, they were given a sake brewing license on April 17, 2017.

It was a huge undertaking, and all this was just to begin attempting the business. The men still had the massive challenge of getting Obama Brewery off the ground. The first thing they’d need was to hire a toji, a type of brewing chief who handles all the technical details of how the sake is made. These people were increasingly hard to come by in an aging and shrinking industry.

“I asked around to all my acquaintances in the sake business as well as unions,” Yoichi says. “but no one could spare the manpower because they were dealing with labor shortages themselves. Many of the unions had disbanded too.” 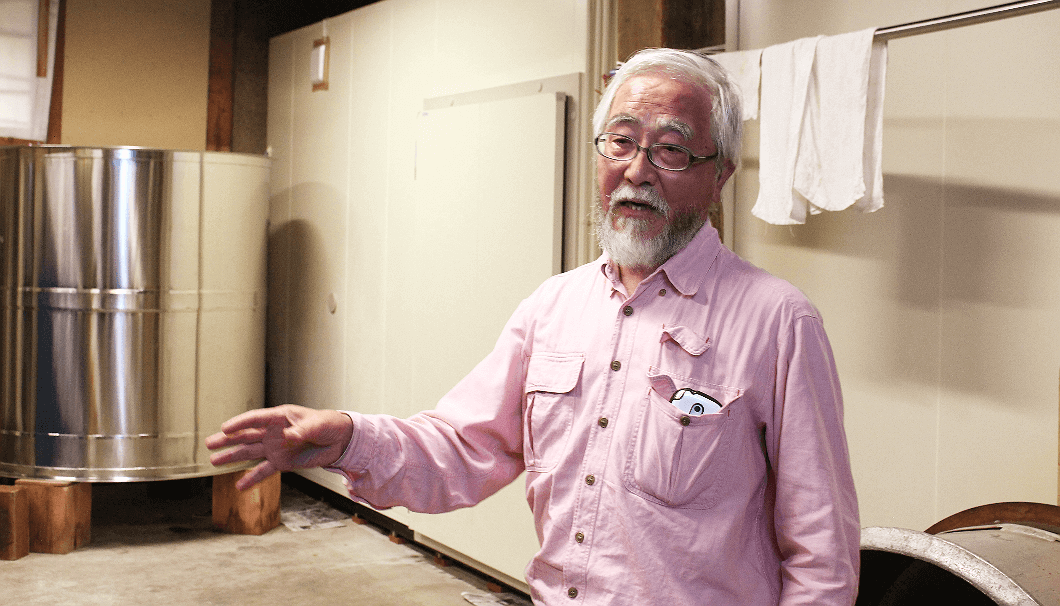 After a long search, Yoichi was introduced to Hoichi Sakagashira, an 87-year-old sake veteran with over 50 years of experience under his belt. Of course, considering his age, he was set to retire, but after hearing about the challenges Obama Brewery faced, he decided to get back into the game.

With the first batch completed, the renewed Wakasa Fuji sake was met with some resistance at first. The sake was really only the same in name and brewed in a different facility by a different toji, and with a new philosophy of sourcing as much of the ingredients as possible from the local region. As a result, the taste had changed, which may have upset some long-time fans of Wakasa. 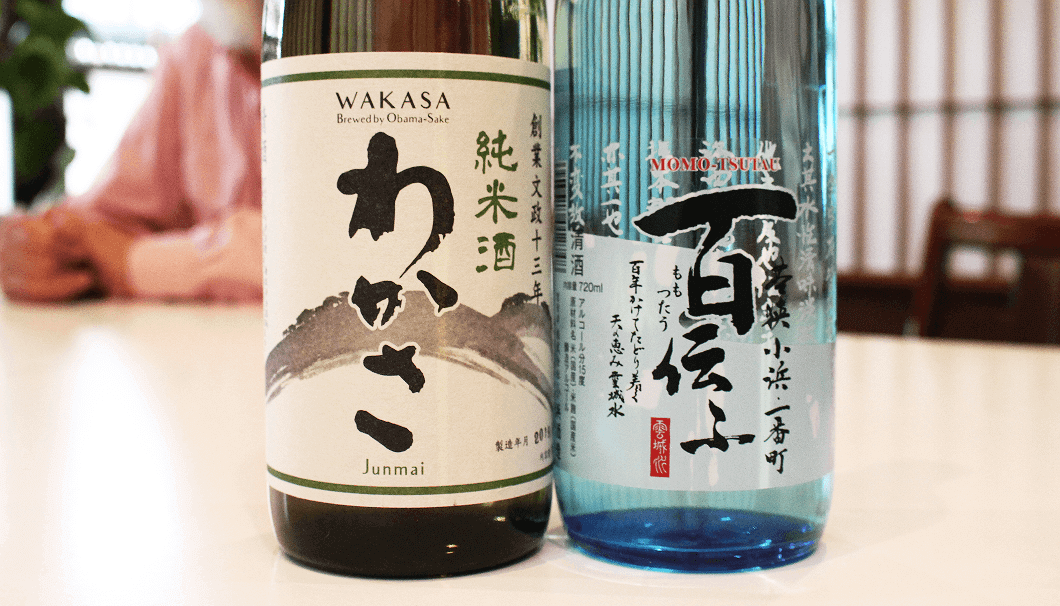 On the other hand, the new Wakasa sake had received a lot of compliments, especially from the growing number of female drinkers, who in survey gushed that the new flavor tasted great and was easy to drink. The brewery eventually found a strong following and in March of 2019, Obama Brewery held a crowdfunding campaign for a Wakasa Junmai Ginjo which pulled in 4 million yen (US$37,000) in the first 24 hours. Moreover, the bulk of those investors came from the Tokyo area, showing that they have already begun to expand sales outside of the Wakasa Bay area in a significant way for the first time in the brewery’s history. 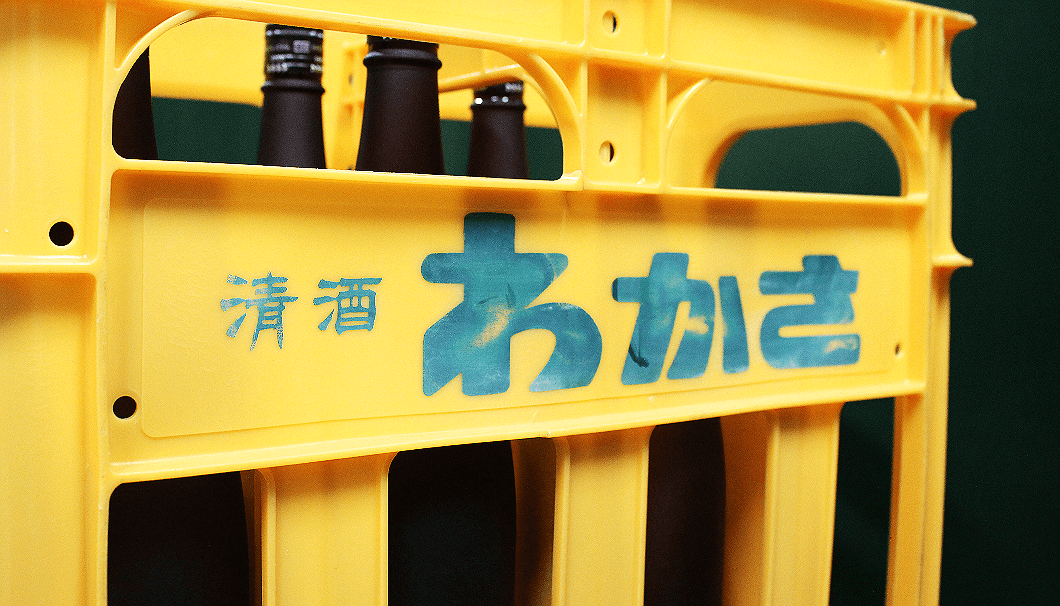 Even after all the struggles to obtain a license, Obama Brewery’s growth still faces a hard road ahead. But Yoichi and Akiteru feel confident in the path they had chosen. Perhaps by foregoing the normal route of succession and starting from scratch, they’ve found a renewed sense of optimism and hope for the future of sake and themselves.