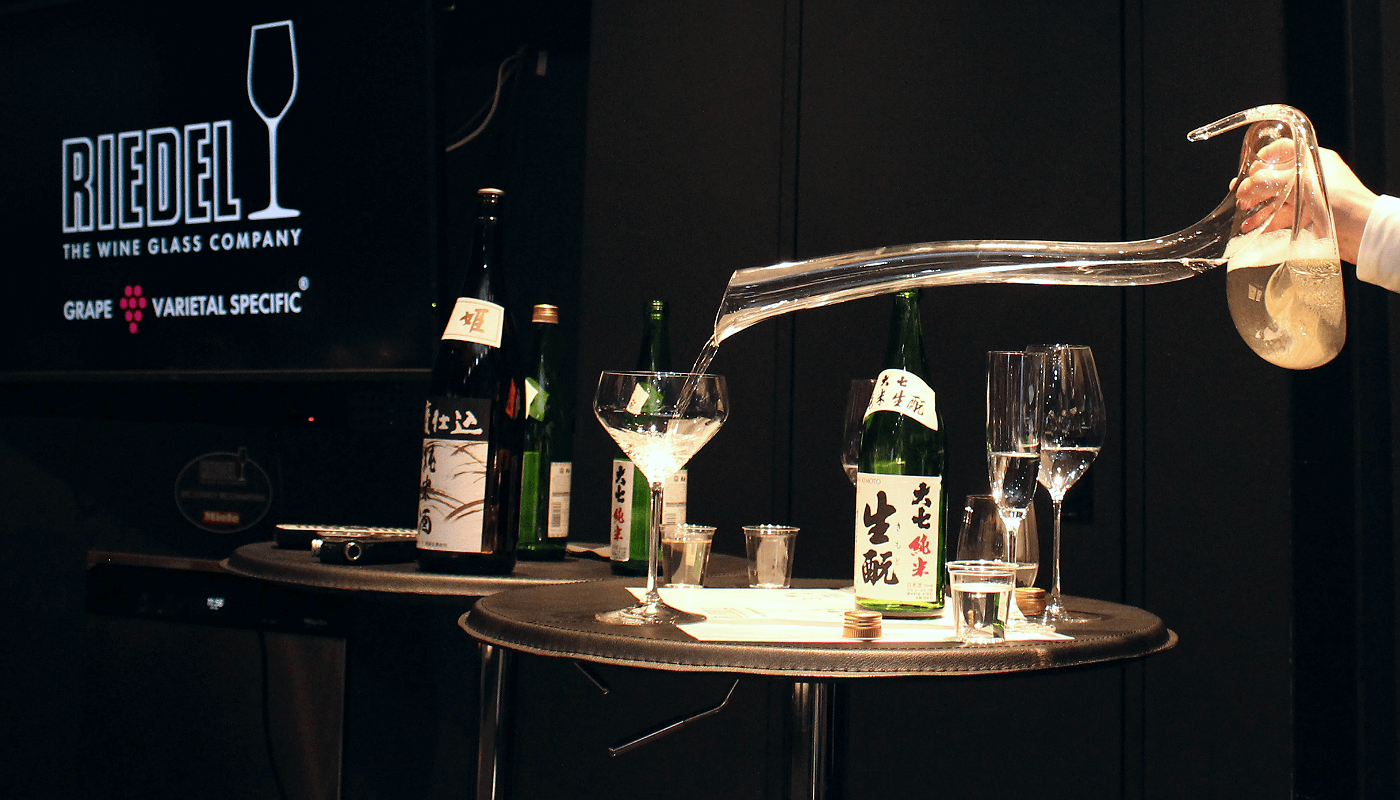 Following the release of their popular Daiginjo Glass in 2000, the Austrian wine glass maker's long-awaited Junmai Glass sets out to lay claim to the genre.

Riedel Turned Their Expertise Toward Sake

Established in Bohemia in 1756, Riedel turned its glass-making expertise into an international wine glasses standard in the 1950s. The company is known by wine-lovers worldwide for its expansive range of glasses, each designed to maximize appreciation of the aromas and flavors of specific varietals. They have since turned that expertise toward Japanese sake, introducing their first dedicated sake glass for daiginjo-style sake in 2000, and now following that up with a dedicated junmai glass in April 2018.

One Size Does Not Fit All

Sake has traditionally been drunk from small cups such as ochoko. That was before daiginjo became all the rage, and Riedel stepped up to pioneer the daiginjo-specific glass, with a tapered, oval design, similar to what many wine consumers are accustomed to. As with their diverse line of wine glasses, this wasn’t just an all-purpose sake glass, but developed to bring out the appealing fruity aromas inherent to daiginjo sake specifically. From there, Riedel next set out to claim a new sake glass frontier. 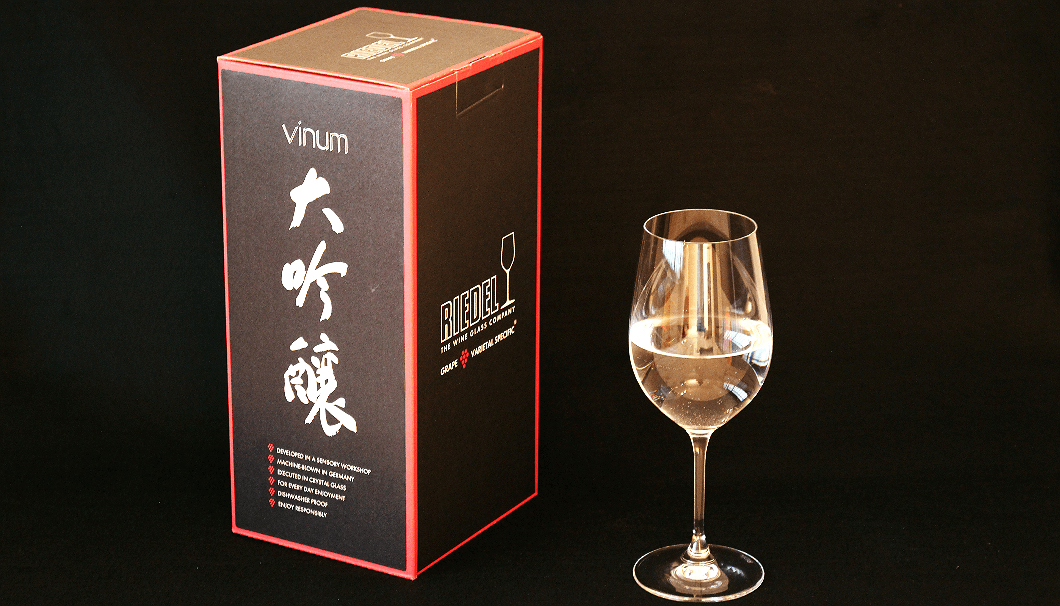 What works for a fruity, delicate daiginjo may not suit the more mellow aromas and richer nuances common to junmaishu. Riedel began development on a junmai-specific glass in earnest in 2010, spending 8 years consulting with sake brewers and other experts, while meticulously refining their design. The result is a new glass with a broader bowl and wider opening to maximize the deep and complex umami typical of junmaishu. 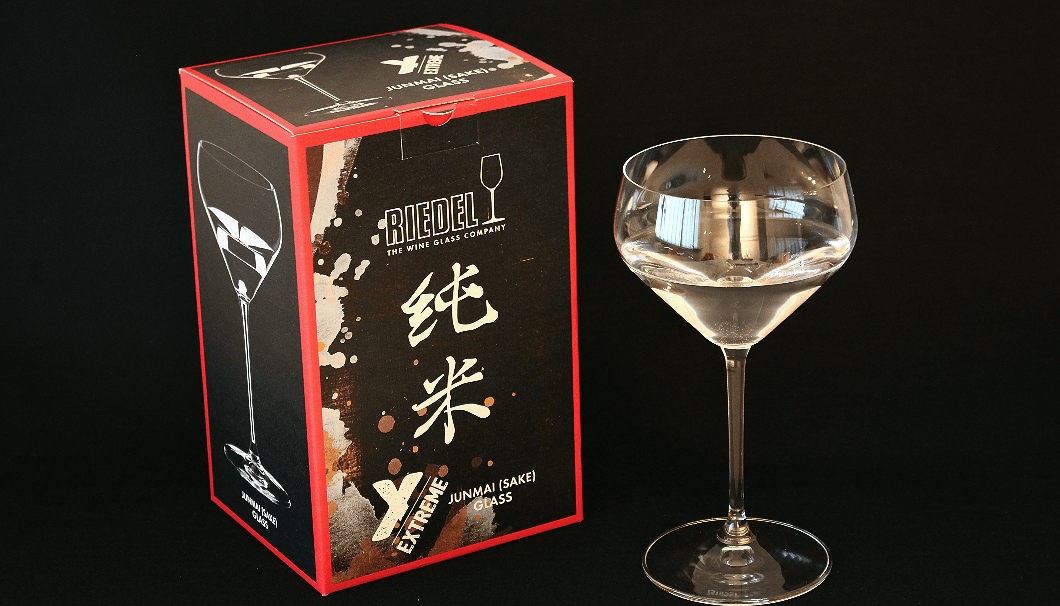 The daiginjo glass was released as the popularity of Japanese food culture was exploding worldwide. Maximilian Riedel, the 11th owner of Riedel, believes that the best accompaniment to Japanese cuisine is sake. 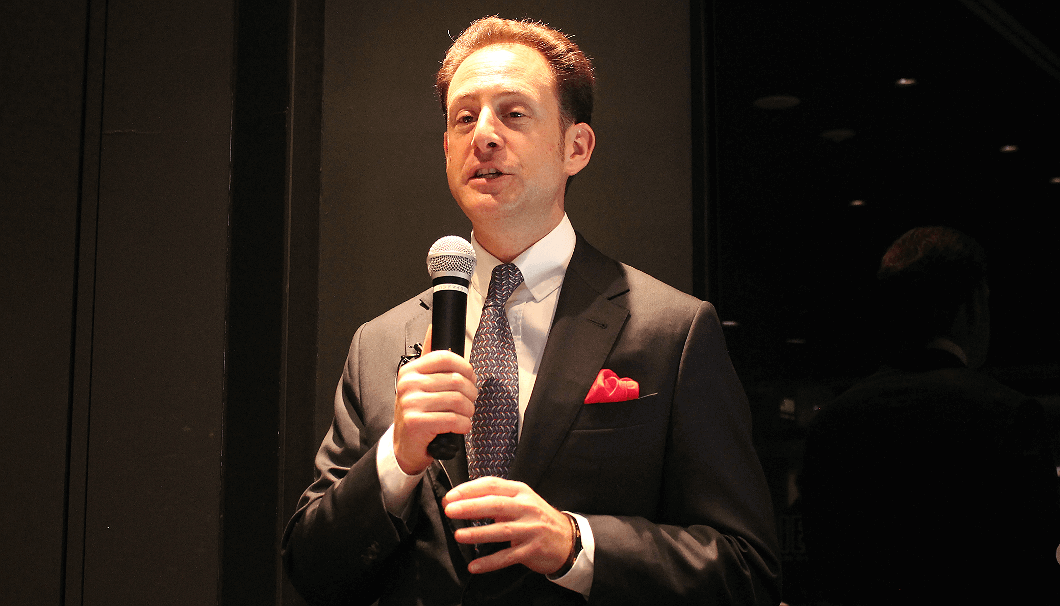 In order to create a glass that would maximize the umami typical of junmai-style sake, the first challenge was determining what type of junmaishu to target. Junmaishu, while having generally common characteristics across different styles, comes in many varieties and has an incredibly diverse range of flavor profiles, resulting in plenty of heated opinions among sake producers and sommeliers. Mr. Riedel said the original concept was that of a small, narrow glass. After careful testing and extensive research, however, the team finally realized that a junmai glass should actually open up, making it more akin to a burgundy glass than one for riesling. While the approach originally felt counter-intuitive, after drinking from the broader vessel, Riedel saw that they were on the right track.

“A fair number of people tend to have a bit of an aversion to the aromas commonly produced by sake where the rice has undergone only minimal polishing. This is particularly true of people that are not very familiar with sake,” says Satoshi Kimijima, 4th generation CEO of sake shop and distributor Yokohama Kimijimaya and Executive Vice President of the Japan Sommelier Association. The junmai glass makes it possible to enjoy the flavors of such sake, while rendering that aroma barely noticeable, resulting in it also being suitable for drinkers who avoid kimoto or yamahai style sake for the same reason.

With traditional Japanese sake cups, such as ochoko, guinomi, or sakazuki, one lowers their face to the vessel. With the ochoko, the sake is caught on your palate and tongue as you turn your face downwards, which was originally thought to be the ideal angle for the flow of the beverage. However, at the April 19th launch of Riedel’s new junmai glass, a comparison taste test of a daiginjo and a junmai sake was served in three different vessels — a daiginjo glass, a junmai glass, and a small plastic cup serving as the ochoko, a tasting which highlighted the degree to which the shape of the vessel impacts the drinker’s experience.

“Most people tend to envision a flute glass when they think of champagne glasses,” Mr. Shoji said. Riedel has also created a new champagne glass that is a bit rounder, so that drinkers take in not only more of the aroma, but can also experience greater sense the flavors and effervescence. 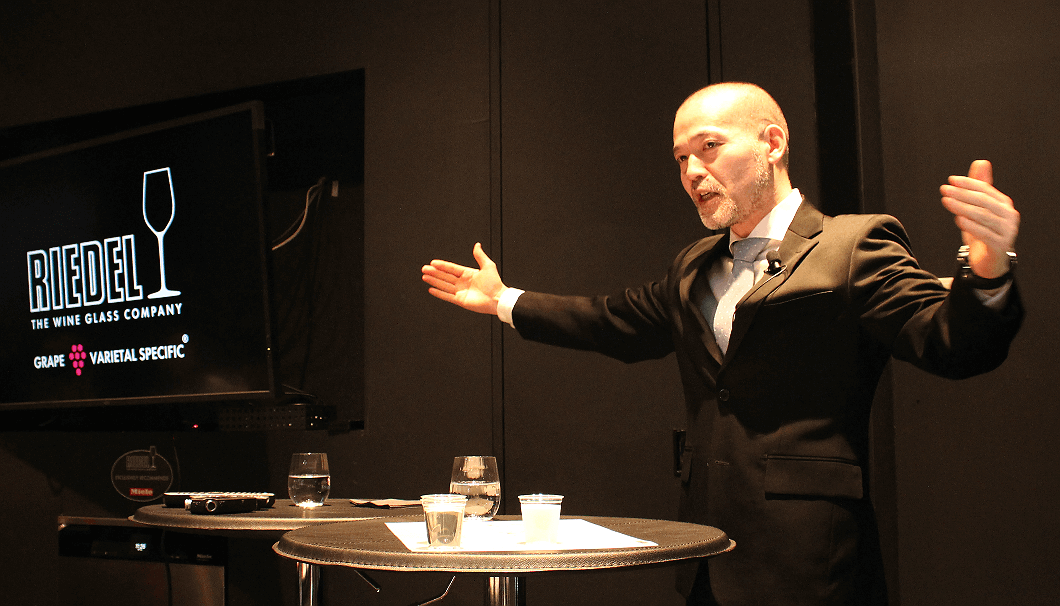 “From a flute glass, you lower your face to a 45 degree angle when drinking,” said Mr. Shoji. “With this new champagne glass you keep your face level. The drink will flow onto your tongue from above and you’ll be able to fully experience the fineness of the bubbles.”

The way the aroma is enclosed changes with the shape of the glass, but the flavor changes according to the position of your mouth on the glass. These were some of the concepts that were gradually incorporated into the design of the junmai glass.

The tasting began with Yumedono Daiginjo from Miyasaka Brewery, as a demonstration of the daiginjo glass’ prowess. The sake’s bright aroma reminiscent of nashi (Japanese pear), while certainly present in the ochoko, was brought to life in the daiginjo glass, as it both harnessed and delivered the aromatic experience that the producer intended.

Next up was Daishichi’s Junmai Kimoto sake. With the plastic ochoko, even a small sip of sake lands heavily on the mid-palate. Generally if the opening of the glass is narrow, your mouth also narrows when you drink, resulting in pinpoint-like contact with a specific region of the palate. Conversely, if the diameter is wide, your mouth naturally widens along with it.

The bowl-like nature of the junmai glass produces a wide contact area across the tongue as it enters your mouth. With your face level, your tongue is relaxed and free of tension so you can more fully experience the mouthfeel of the sake. The shape of the glass also keeps any specific aroma from coming on too strong or being too concentrated, allowing for the umami to be properly experienced. When the same sake was sampled from the daiginjo glass, the appealing and nuanced flavors of the junmai sake vanished all-too-quickly. 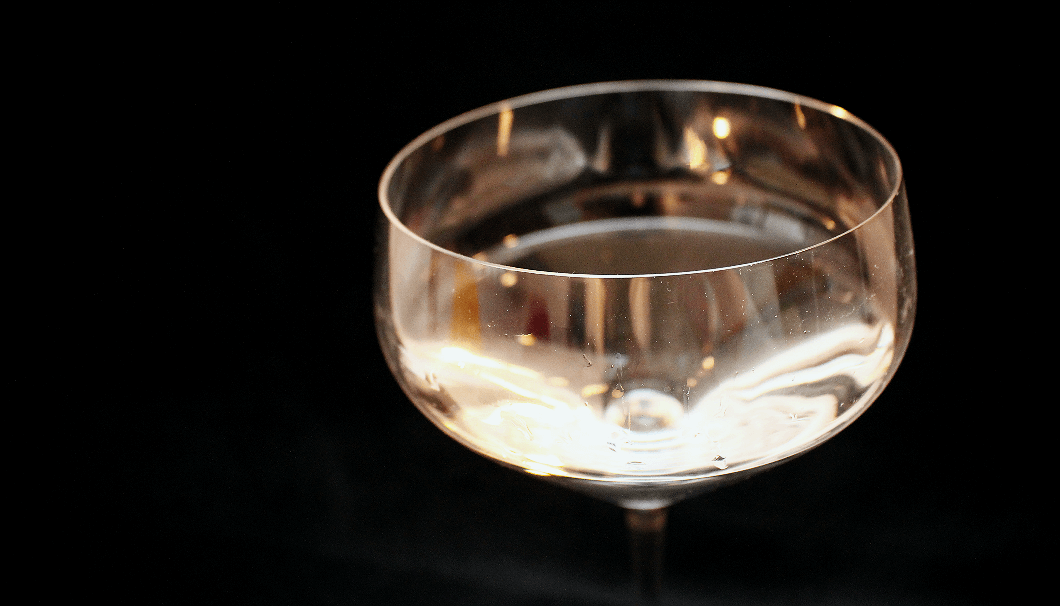 Caption: The junmai glass is has a wide opening

As sake grows in popularity, Riedel’s lineup offers the sake world a proposal of (currently) two very different sake glasses that simultaneously simplify and showcase the beverage’s diversity. The new glass accentuates the positive ways that junmai and daiginjo differ from one another, allowing sake lovers an even more approachable and appealing pair of options for relishing in their elixir of choice.

The new junmai glass is now available at Riedel shops in Japan and through the company’s online shop.