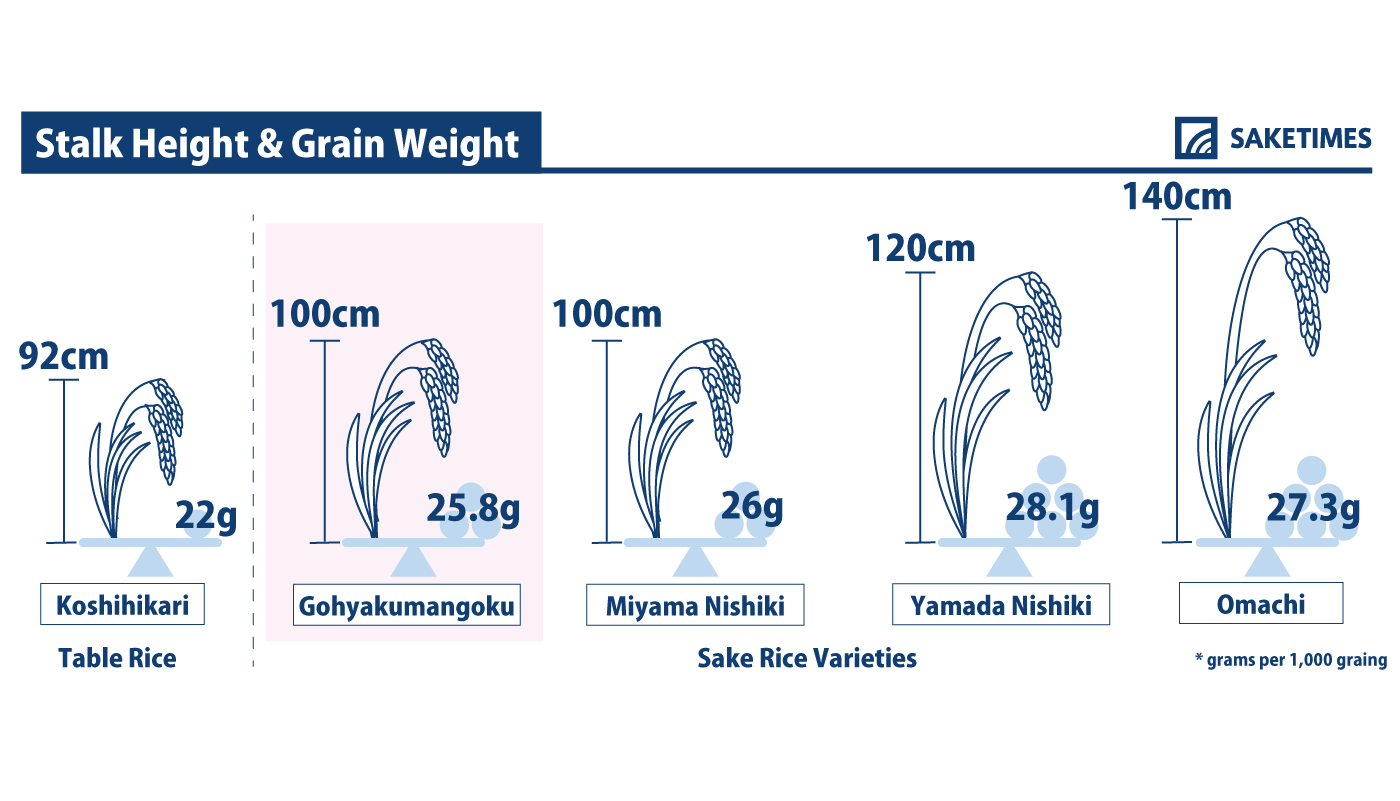 Gohyakumangoku is a popular variety of sake rice from Niigata. It was registered in 1957 under its current name, which translates as “five million koku” or approximately nine million liters, as a commemoration of Niigata’s rice yield surpassing the five million koku mark that year.

Although it took approximately twenty years for Gohyakumangoku to go mainstream, its stable characteristics and adaptability to mechanized brewing eventually led the rice to hold the largest cultivation acreage among sake rice varieties, until being surpassed by the famed Yamada Nishiki in 2001. Nowadays Gohyakumangoku is cultivated all across Japan, with its highest producing regions being in the northwestern prefectures of Niigata, Toyama, Ishikawa, and Fukui.

There are a few qualities that make Gohyakumangoku as popular as it is. First is its structural advantage. Gohyakumangoku yields large grains – a hallmark of superior sake rice – weighing in at 26 grams per one thousand unmilled rice grains.

Gohyakumangoku rice also comes with large and well-centered shimpaku, or the starchy heart of the grain. This makes this particular rice variety ideal for sake brewing; the starch clustered in the center allows for effective removal of the outer layers of the grain that house proteins and lipids, which can cause unwanted flavors in sake. High starch content also ensures a vigorous and stable fermentation, as starch is an essential source of nutrients for koji. There is a caveat though; The large shimpaku prevents the rice from achieving a low seimaibuai, as progressive milling might break into the starch and crack the grain.

“Yokozuna of the East”

Gohyakumangoku produces light and clean sake, symbolic of the Niigata style. Its refreshing flavor profile is well-received, and draws a contrast to the rich and often full-bodied sake made with Yamadanishiki, which is why the two varieties are sometimes dubbed as “Yokozuna of the East” and “Yokozuna of the West,” respectively.

These contrasting characteristics are easy enough to pick up on, even for those who are new to the world of sake. We recommend trying the two rice varieties side by side: the difference is but one of many striking examples of the variety sake has to offer.

Learn More>>Seimaibuai：SAKETIMES GLOSSARY
Free Sake Infographics:Feel free to download and use them freely from here to help you learn more about sake!