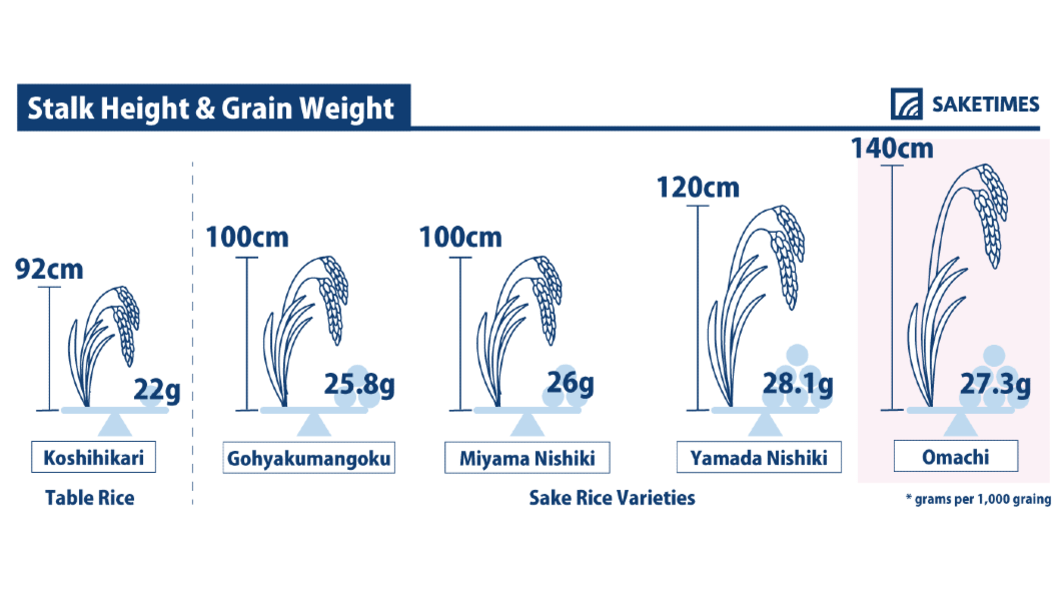 Omachi is a variety of designated sake rice, or shuzokoutekimai, from Okayama. It was discovered in 1859 in the town of Omachi, in the south of Okayama Prefecture. Although it was first cultivated under a different name, the name of the town became synonymous with the rice as it quickly gained popularity among breweries in Western Japan.

Despite earning high appraise as a sake rice, omachi’s cultivation hasn’t spread much outside its native Okayama. Omachi stalks grow very tall, making it difficult to maintain upright as the grains start to form and making omachi susceptible to inclement weather. The long stalks are also difficult to harvest with modern mechanized methods, especially compared to ubiquitous varieties like yamadanishiki. Okayama, known for its sunny climate, presents perfect conditions for growing omachi, and the region accounts for 90% of overall production to this day.

Omachi can also be difficult to handle because it’s a pure rice strain, meaning it retains its wild elements. The majority of sake and table rice varieties existing today are cross-breeds, which have been engineered to optimize utility and flavor. Omachi may not be the product of cutting-edge genetics, but its contribution to the advancement of modern day sake brewing can’t be understated. Omachi lineage accounts for almost two-thirds of all sake rice, even including the two most commonly used varieties, gohyakumangoku and yamadanishiki.

Omachi’s pure-bred nature lends it a distinctive flavor profile, with complex, earthy notes and low aromatics. It’s uncommon for rice variety to determine the resulting character of sake, as production methods and other variables tend to exert more influence on the finished brew. This distinctive character can be equated to the correlation between a grape variety and resulting wine, making omachi an excellent example of  terroir in sake.

Omachi has a reputation as something of a connoisseur’s sake rice. It’s gained a die-hard cult following, who lovingly call themselves “Omachists” and there’s even an annual omachi sake competition held in Tokyo.