The Lifeblood of Kyoto Culture

The rich cultural life of Japan's ancient capital is steeped in sake tradition, if you know where to look.

We’ve been exploring the impact that brewer Gekkeikan has had on Japan’s sake industry and their role in turning the sake-producing region of Fushimi into a tourist destination. Their dedication to the preservation of important historical artifacts related to sake making and the atmospheric traditional architecture of a Japanese castle town has been instrumental in defining Fushimi’s modern brand. Other community service endeavors like organizing neighborhood cleanup activities and Gekkeikan’s donating of their own land to build safer and more comfortable bus stops has been equally important in ensuring Fushimi is a pleasant place to live and visit.

Looking for the Laurel Crown

The company’s influence on the cultural life of Kyoto more broadly is just as inextricable, if more subtle. Once you learn to spot Gekkeikan’s distinctive laurel crown logo and dynamic calligraphy, you begin to realize how ubiquitous it is in the former capital, not just on drink menus but in the very fabric of the culture. 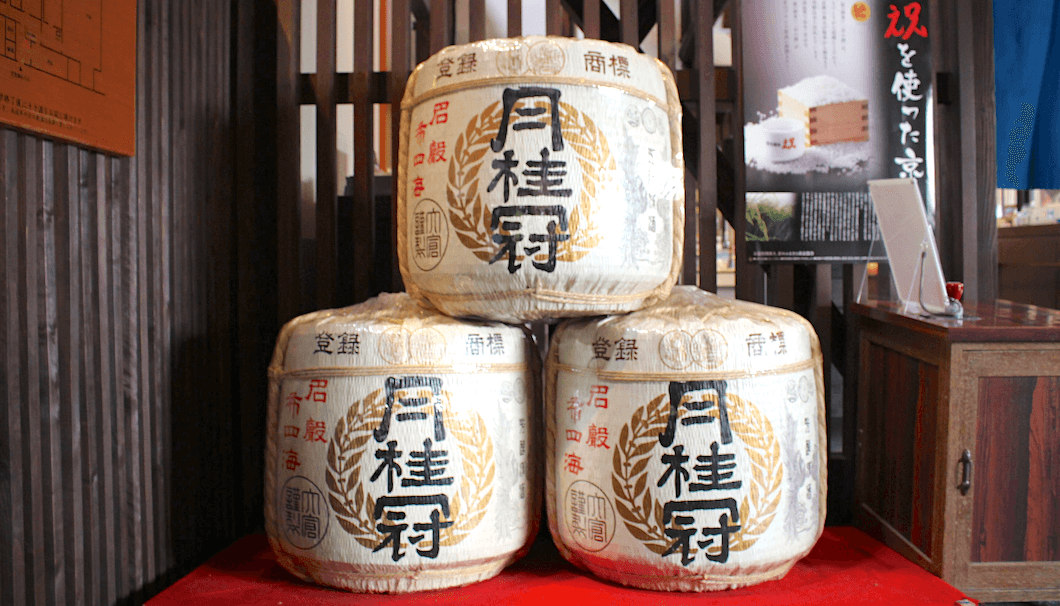 One of the most memorable seasonal experiences in Kyoto is undeniably walking along the canals of Gion in April, appreciating the delicate pink cherry blossoms illuminated by hanging lanterns. If you look closely, you’ll see that many of those lanterns bear the Gekkeikan mark.

At this time of year, you might be able to carry on to the famous Gion Kobu Kaburenjo theater, founded in 1873, for an annual event called the Miyako Odori. The popular event, which has been held for 146 years, is a rare chance to see the city’s famous geisha and their maiko apprentices in a public performance.

To celebrate the arrival of spring, the elegantly clothed women gracefully sweep through the moves of the Cherry Blossom Dance, accompanied by music played on koto and other traditional Japanese instruments. Their flawless precision and poise are even more impressive when you consider that four hour-long performances are held every day, a taxing schedule the performers maintain throughout the month of April.

As you take your seat for this popular exhibition, you may notice Gekkeikan’s mark gracing the seat covers in the theater. They’ve been a major sponsor of the Miyako Odori for nearly a half century.

A Gekkeikan representative explains that aside from the obvious benefit to their public image, the sponsorship of such an important event in Kyoto’s cultural calendar is something many of their employees take pride in. The high profile festival is, after all, a revered event that brings in guests from far and wide.

Along with supporting an aspect of Kyoto’s cultural life, the sponsorship has reportedly been personally important to many of Gekkeikan’s senior staff over the years due to the event’s long-held significance and the sense of responsibility staff have in preserving the tradition. 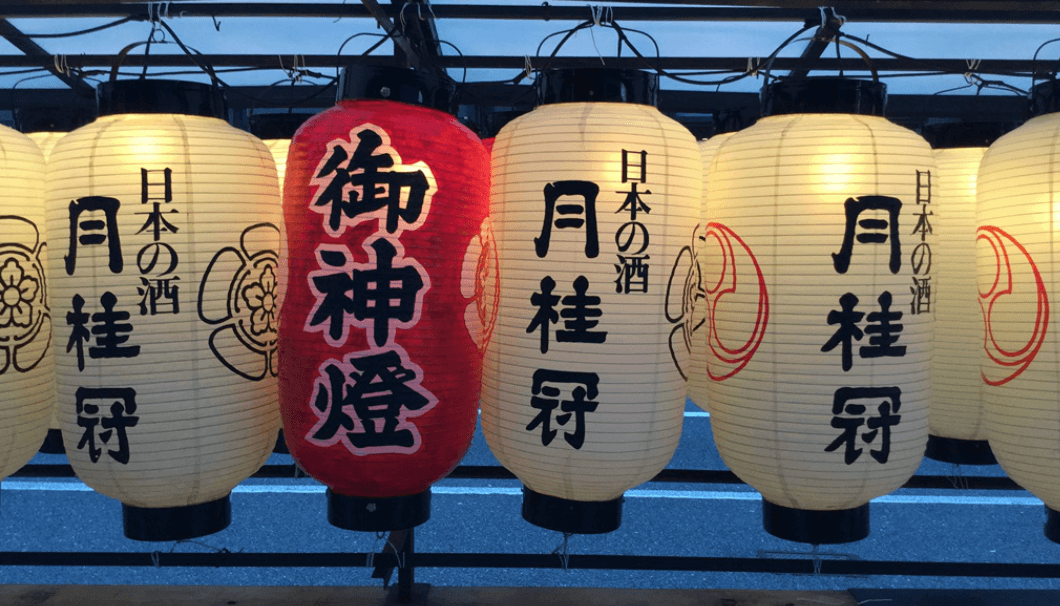 In July, the world descends on Kyoto for the Gion Matsuri, one of Japan’s most famous and beloved festivals. The festival is held throughout the month, with a variety of jubilant events taking place in the streets surrounding Yasaka Shrine. The constant action gives the city a celebratory air. However, the festival started in 869 as a more somber affair, the processions intended to purify the city of the terrible plagues that used to grip the area in the muggy summer heat. Portable mikoshi shrines were carried through the streets to the Kamogawa River to be ritually washed, banishing the evil spirits believed to spread disease.

The main attractions for the festival are the grand processions on July 17 and 24, with massive floats called yamaboko trundling around the city, pulled by hand even though some of the most impressive are several stories tall and weigh up to 12 tons. The platforms are covered in impressive textiles and stacks of ceremonial sake casks being offered to the gods. Look closely and you’ll find many of them bear Gekkeikan’s distinctive laurel crown.

While the sake contribution is intended for the gods, Gekkeikan is also focused on creating a welcoming environment for the festival’s human participants and spectators.

The brewer contributes the white lanterns hanging around the grounds of the shrine. Many of the yamaboko floats are adorned with cascades of hanging lanterns too. Along with the famous sounds of the flutes, bells and drums, the warm glow of the lanterns is an especially enticing part of the festival’s appeal.

In addition to the sake and lantern donations, Gekkeikan is well-known for helping to equip and preserve the famous Kankoboko, an iconic float that’s a part of the annual procession. But the company plays yet another role – one that is equally important, if less visible.

One of the high points of the procession is the tsuji-mawashi, when the floats are turned 90 degrees at key intersections. They are rolled onto bamboo, which is then pulled to turn the wheels in the correct direction. Water is poured on the bamboo to make this process easier, and Gekkeikan is a part of the team that supplies this water, called the Mizuban. Gekkeikan staff man the water barrels at the northwest corner of the Shijo-kawaramachi intersection, supplying the water for each float that passes through. The brewer also supplies the water used at the other intersections the parade passes through.

Another of Kyoto’s famous cultural attractions is the Shijo Minamiza kabuki theater. Its prime location on the edge of Gion has made it the premier theater spot in town for 400 years, although the grand, Momoyama-style building that currently sits there dates from 1929. Its graceful gables spread over the street, an abiding landmark for locals and visitors alike.

Each December, the historic theater holds an event called Kaomise, or “face showing,” to celebrate the opening of a new season. The names of the coming season’s actors are painted on special plaques called maneki, introducing them to the public. As tinsel and carols herald the end of the year in the West, Kyotoites know that the new year is approaching by the appearance of the maneki above the Minamiza doors. 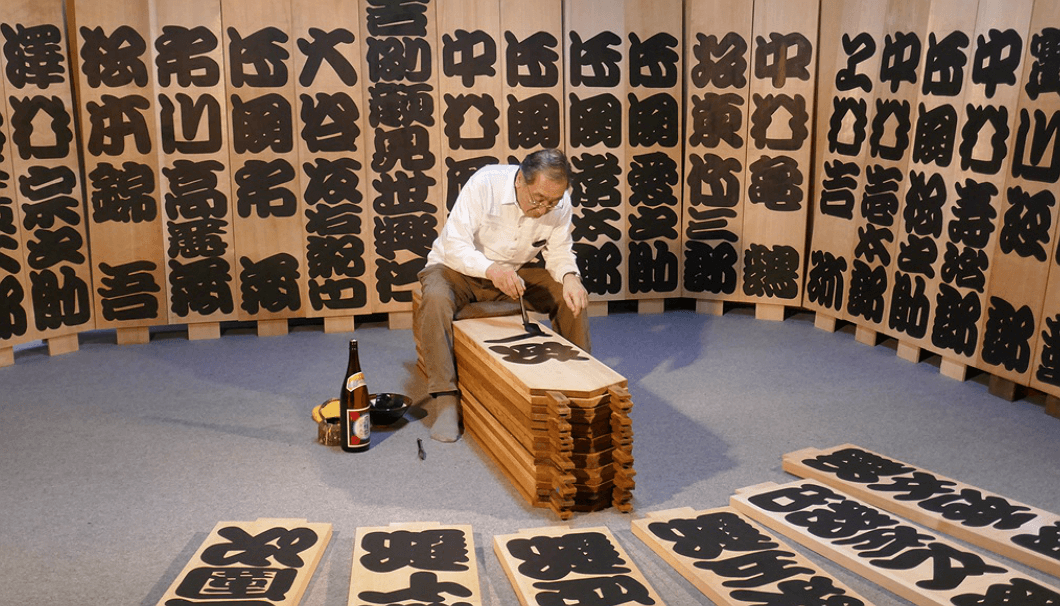 Although you wouldn’t know it, Gekkeikan plays its own unsung role here, too. The maneki are painted by master calligraphers in a unique style, using a specially prepared ink. They add a small amount of Gekkeikan sake to a viscous ink, imbuing it with a clean, lustrous shine. They then brush the names of the performers onto cypress boards in thick, continuous lines in a style known as kantei.

One of the master calligraphers, Yu Inoue, prefers to use Gekkeikan’s Josen sake to blend his ink, which the company is happy to supply.

Gekkeikan takes pride in sake’s importance in many aspects of Japanese culture, from ceremonial offerings to the gods to the friendly toasts people share to kick off important occasions. Providing sake for the maneki plaques is just one of the ways the company honors sake’s important role in Japanese life.

Although CSR has become a buzzword in business these days, it’s refreshing to see a company that has been quietly embodying community involvement for centuries. Gekkeikan isn’t just “giving back,” they are an inextricable part of the community itself, steeped in local history and culture. And we’ll drink to that.

HOME > The Lifeblood of Kyoto Culture