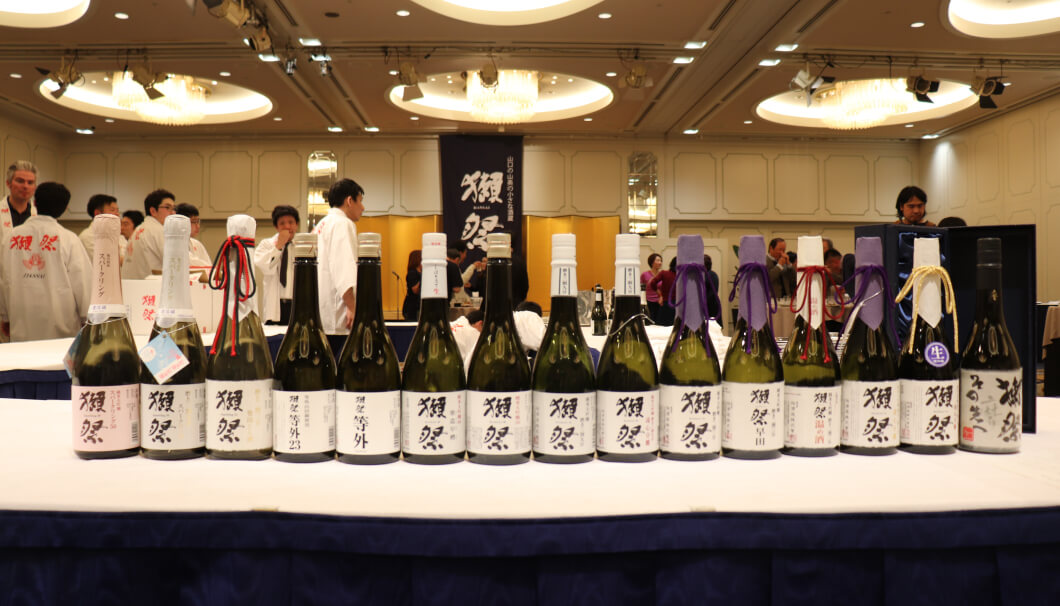 Interview: Dassai Head Spills the Secrets Behind its Global Success

Among sake brands making a global impact, Dassai arguably leads the way. From a collaboration with the French master chef and restaurateur Joël Robuchon to their opening of a brewery in New York state, Dassai continues to blaze new trails.

Ikoma: I visited the Dassai brewery a while back, and I have to say I was truly impressed at the brewing process.

Sakurai: Thank you! We’ve actually made some changes to our workflow since then. Till now, we had a single team. Now we’re operating as two teams.

Sakurai: Both teams perform the same fundamental process, from washing the rice to making koji, mixing the mash — all the way to bottling. But, each team experiments with different aspects, from the water absorption of the rice to fermentation temperature. Then, they exchange information and compare the final results.

Ikoma: In other words, the two teams both try to achieve the best results with two different routes.

Sakurai: Put simply, we wanted to introduce changes to the sake brewing process.

Ikoma: What’s the reasoning behind that approach?

Sakurai: We’ve been fortunate that Dassai has come to be so beloved by our customers. But from that, within our company a certain success model has set in — the “standard” for good-tasting sake, if you will. I wanted our brewery to become one that would shatter expectations and deliver new sensations.

Looking at other fields, you have companies like Apple, Amazon, and Alibaba — companies that keep changing even after achieving incredible growth, and who continue to deliver exceptional products. In the sake field, though, there’s this sense that brewers that grow too big will fail. So I want us to continue to evolve and aim for making even better-tasting sake.

Ikoma: How large is the team responsible for brewing Dassai?

Sakurai: Our production department has about 130 people, with another 80 responsible for other elements like shipping. In terms of the number of employees involved with sake brewing, it’s the largest team in all of Japan.

Ikoma: I think a company’s philosophy is often revealed in the type of people it employs. In other words, the organizational structure influences the work culture. In that sense, the fact that over half of your employees are directly involved with production really shows a strong commitment on the corporate level to brewing great sake, doesn’t it?

Sakurai: It sounds awfully poetic when you put it that way <laughs>. But really, it’s more that you can’t brew sake without people. Many people often say about Dassai, ‘You brew your sake by machine, right?,’ but the truth is that from manual labor to machines to data — our workflow is optimized so that our people can brew great sake.

Ikoma: So, that’s the secret to Dassai’s great flavors.

Sakurai: Our philosophy is, ‘anything goes.’ People can do amazing things by hand, and machines are efficient, too. Data and AI can help accomplish even more. It’s all in the name of great sake.

The Challenge of Global Expansion

Ikoma: And I suspect global exports are contributing to that?

Sakurai: Yes, a good portion is overseas sales. The Japanese market is holding steady, but in recent years, the Chinese market has expanded quite a bit.

Ikoma: I’ve traveled on business to New York, San Francisco, Shanghai, Hong Kong, and so on, and everyone’s talking about Dassai. What do you think has brought about this sort of brand recognition?

Sakurai: I think it’s whether or not we’ve taken our job seriously. The chairman [of Asahi Shuzo] and I have traveled overseas ourselves to market Dassai, and we’ve put considerable effort into cultivating new markets.

The main benefit of top executives going abroad ourselves is that we can raise issues directly when things aren’t right. Going to exporters and making demands about quality control and storage environment, methods of approaching companies with developing markets. We can compel them to do it right. We’re often told that none of their other clients are as demanding, but quality control is absolutely vital in sake.

Ikoma: So, to put it another way, there are breweries that don’t take it seriously.

Sakurai: Well, perhaps there aren’t so many anymore. I remember talking with a staff member at an exhibition in France ten years ago. This person told me, plenty of breweries tell them they want to exhibit, but when those teams come over, [they don’t take it very seriously].

Ikoma: There’s a lot of implications there… With subsidies from the government, they kind of become this grand delegation. After all, acquiring a brewing license requires a close connection with the government.

Sakurai: In that sense, perhaps it was to our benefit that we didn’t over-rely on governmental support. Of course, there were exceptional cases, but for the most part, we budgeted these trips within our own company, and went abroad set on paying for these expenses by marketing our sake abroad as best as we could.

There are many varieties of sake, each with their own appealing flavors. There are elegant types of sake, and others rich in umami, or with a matured taste. And yet, I feel like [many brands lack individual character].

Ikoma: Yes. I also think that the sheer variety is one thing that makes sake so special. But I agree; we need to do more to distinguish brands. Perhaps more variety in price point — table sake, luxury sake, etc.

Sakurai: Even if we were to fail, we could accept that. I’ve chosen this path, so I can say, “it was my own fault.’ But if everyone is trying to do the same thing, and it doesn’t work out, then that lingers with you.

A Brewery in New York, A Restaurant in Paris

Sakurai: We were approached by the Culinary Institute of America (CIA), which is next door to our planned construction site. Quite some time has passed since the original Japanese food boom in the U.S., and they were looking to develop an even more authentic Japanese culinary curriculum. And so they came to us.

Ikoma: As I understand it, the CIA trains not just chefs, but food journalists and photographers, analysts and other culinary professionals. To have a sake brewery next to a school that produces the future leaders of the American food industry, for the first sake in their lives that they drink to ,most likely, be Dassai. That’s going to have a huge impact..

Sakurai: We’re truly honored to be able to share our sake with the world at a place of education. I believe it’s important for the future of sake, and I think it will be an opportunity to change the industry.

Diners are drinking sake at Japanese restaurants around the world. I’m very happy about that. But there’s a tendency for the reach never to go beyond a limited group of sake aficionados. To clear that barrier, I think it’s necessary to introduce sake into the local food culture.

To that end, we also opened Dassai Joël Robuchon in Paris, in collaboration with the master chef himself. Here, we want people to taste Dassai together with the best cuisine. To experience first-hand that great sake pairs well with more than just Japanese cuisine. To cultivate a new perspective, and open up new dining possibilities.

We hope that our New York brewery will also help make sake a more familiar presence, and help it find a place within American cuisine. New York is home to a diverse population, giving it the power and potential to assimilate a new food culture. It also has the financial power to explore new gourmet possibilities.

Ikoma: I can really relate to that. Japanese cuisine has found recognition overseas, but it’s still mostly limited to sushi, ramen, and the like. To truly spread sake culture on a global scale, it’s important to connect it with the world’s major culinary cultures.

Sakurai: To that end, we also plan on setting the price in the U.S. at about the same level as in Japan. By brewing the sake in the States, we’ll be able to achieve that.

If we can sell Dassai Junmai Ginjo 45 at US$15, that’ll put it at the same price point as California wine for everyday consumption. If customers can substitute just one bottle of wine with a bottle of Dassai, that’ll be a huge step forward.

Ikoma: When you picture the future of sake, what do you see?

Sakurai: I’d like to create a future where sake is naturally consumed as a matter of fact. I want to see a world where, for example, diners at a bistro in France are naturally enjoying Dassai.

Ikoma: A world where sake is a natural choice for everyone.

Sakurai: Exactly. But to get there, we need to optimize our distribution and storage system to ensure a stable supply. That’s the bottleneck at the moment.

There’s a robust system in place for distributing wine around the world, with established channels and wine cellars, but sake has different storage requirements and requires a different business approach, meaning we have to build it from the ground up.

We use local wholesalers for distribution, but even now, ten years later, we’re still fumbling in the dark. So if we turn to the [Japanese] government for aid, it’ll be not for promotional events, but for distribution. A system where containers are centrally managed by the government, and that serves as the basis for overseas distribution.

Ikoma: I’d love to see that happen! That would solve lots of problems, wouldn’t it?

Sakurai: It’s difficult as an individual sake brewery to secure containers, so if it were possible to compile and oversee them centrally, this would be a huge help.

In positing that the difference between global success and failure lies in how seriously one takes the work, Mr. Sakurai’s sheer commitment to bringing sake abroad is clear. Where other breweries might stop at simply shipping products to far-flung locales and hoping for the best, Dassai has gone the extra mile in establishing roots the world over. In doing so, the brewer is able to convey the appeal of sake to international consumers and share the joy of sake right along with them.

And that makes all the difference.