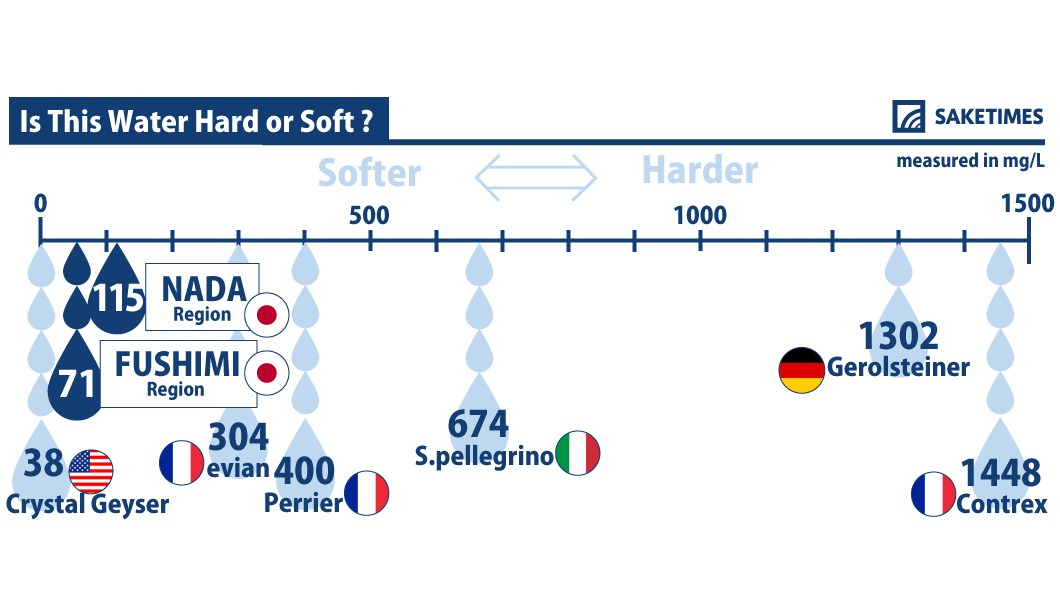 1. Sake’s Most Essential Ingredient?
Shikomi-sui (often also referred to as shikomi-mizu) is the water used for brewing sake. Approximately 80% of what’s inside a bottle of sake is water. In fact, between water as the base ingredient, the water used to wash the saka mai, water used to clean the equipment and the myriad other purposes throughout the brewing process, the amount of good old H2O committed to making sake is said to be a full 50 times that of the all-important rice. It’s fitting, then, that water used in sake brewing is appropriately venerated and given its own special designation: Shikomi-sui.

2. Different Water, Different Sake
The World Health Organization (WHO) classifies water as either “hard” or “soft,” depending on the concentration of magnesium and calcium in the product. Hard water is typified by a heavier mouthfeel and a vague bitterness, while soft water, conversely, is described as clean, light and even “sweet.” These characteristics are carried over to sake: Hard water brews usually beget “karakuchi” (dry) sake, which tend to feel more substantial on the tongue, with a more pronounced bite. Soft water often produces “amakuchi” (sweet) sake that’s generally characterized to have a more delicate mouthfeel. Of course, with mountains of brewing factors ultimately affecting the final profile, this isn’t a hard and fast rule.
Nada, Hyogo Prefecture and Fushimi, Kyoto are areas typically referenced as sources of immaculate shikomi-sui, each known for their ideal hard or soft water respectively.

3. Generational Shift
While a general preference for sake brewed with soft water has dominated the ginjo-inspired “premium” market and been considered “ideal” in recent decades, as breweries have gradually shifted to producing more locally-defined styles, reintroduced relatively “traditional” brewing methods, and started to take into consideration the demands and potential in more diverse markets, a number of breweries are now reexamining not only the value, but necessity for slightly harder water. As with just about anything in the world of sake, it’s not a question of “better” or “worse”, but a matter of process that is aligned with the end goal or product.

Learn More>> Brewing water: the life-force of sake
Free Sake Infographics: Feel free to download and use them freely from here to help you learn more about sake!