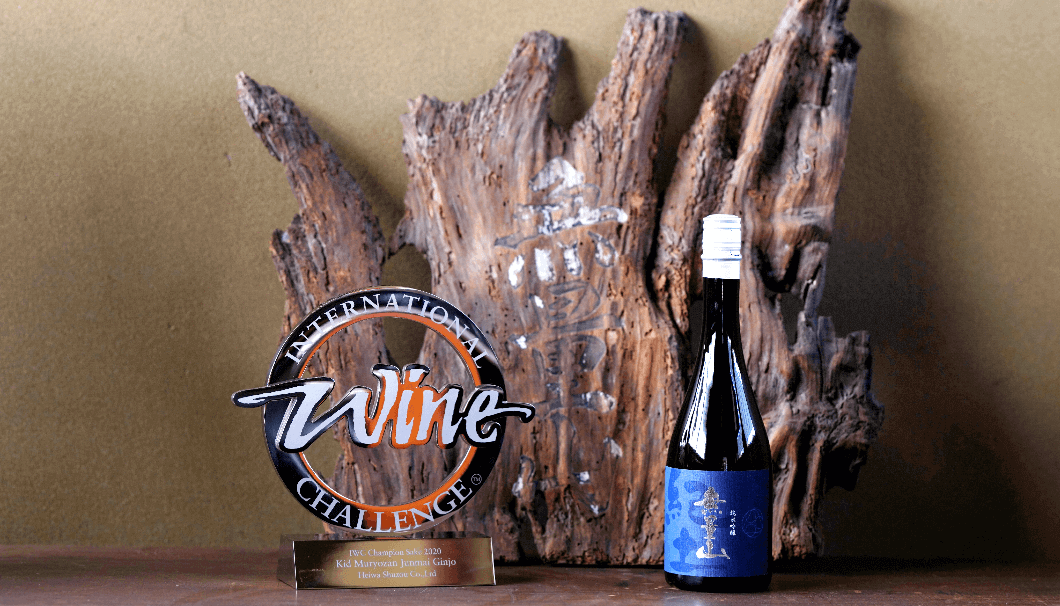 An innovative brewery impresses on the global stage with a double win for their KID sake label.

Heiwa Shuzo is rapidly winning acclaim both in Japan and overseas, having been dubbed “Sake Brewer of the Year” for two years running, and scooping up the prestigious Champion Sake award for their KID Muryozan Junmai Ginjo at the International Wine Challenge (IWC) in December 2020.

Behind this unprecedented achievement lies President Norimasa Yamamoto’s emphasis on teamwork. SAKETIMES recently visited the company’s brewery in Kainan City, Wakayama, to learn more about the team spirit behind the brand’s success.

The IWC, said to be the world’s most influential wine tasting event, introduced its sake division in 2007.

The competition bestows an additional award, Sake Brewer of the Year, to the entrant with the highest overall scores.

“We won Sake Brewer of the Year in 2019, and wanted to aim for Champion Sake in 2020,” Yamamoto says. “Our KID Junmai Daiginjo 40 and KID Muryozan Junmai Ginjo had both won awards, so we figured we might have a shot.”

“The IWC is important for us — a win means your sake is ranked among the best in the world,” continues Yamamoto. “Also, with COVID-19, major Japanese competitions like the Annual Japan Sake Awards and Sake Competition were cancelled in 2020, so we were really pinning everything on the IWC. I never imagined that we would win Sake Brewer of the Year twice in a row, so winning Champion Sake at the same time came as even more of a surprise.”

Heiwa Shuzo are the first competitors to simultaneously win both Sake Brewer of the Year and Champion Sake since the IWC created its sake division.

“I wasn’t able to travel to the awards ceremony in London, so I took part over Zoom. It was great for us to get some positive news in these difficult times. The whole brewery had been working towards the Champion Sake award, so this win was something we could all share in.”

When asked for the reason behind his brewery’s success, Yamamoto puts everything down to the strength of his team.

“Since around 2019 in particular, we have been working hard on fostering teamwork. We started having regular discussions on how to improve our day-to-day brewing, and since then I’ve felt the quality of our sake steadily improve.”

As a manager, Yamamoto says he tries to facilitate communication among his staff.

“I don’t think of the brewery as a vertical hierarchy with the brewmaster at the top and the others below. Everyone is on the same level, and so I try to encourage the horizontal sharing of information.”

Brewmaster Hidemichi Shibata gave SAKETIMES his take on the recent competition wins: “We just put the effort in. We didn’t really change anything. The only difference is that we’ve had a greater sense of ourselves as a unit — ‘Team Heiwa Shuzo’ — since this past season.”

“It’s tempting to focus on the brewers, but in fact all team members, including the part-timers who attach the labels, play an important role in creating a quality product,” Shibata continues. “When our president promotes our sake and we receive positive feedback, it makes everyone involved feel pride in their work. It became a positive cycle.”

Treating his brewery as a small business, Yamamoto has written a book about his managerial philosophy, entitled “Organizations for Individuals” (Nikkei Business Press). We asked him what it takes to build a successful organization.

“I think a good organization is one that rewards members with ability and helps them to get results. By ‘results,’ I mean something that society values. In other words, the product sells well and attracts repeat customers.”

Heiwa Shuzo pays its staff higher wages over the industry standard — another good way to maintain motivation among the team. And, unlike at most breweries, completing higher education is a prerequisite.

“When we started hiring only fresh university graduates, I realized they wanted a job they could feel proud of. I didn’t want them to feel that low wages were the norm just because they had chosen an unusual line of work. For this reason, I insist on a small but skilled team with a focus on individual performance.”

Heiwa Shuzo currently has around 50 employees including part-timers, with 17 permanent members of staff.

To ensure a stable supply, Heiwa Shuzo has a standardized production process that its entire staff are familiar with. At the same time, to encourage initiative, each brewer is assigned their own individual brewing tank.

“Most breweries assign menial tasks, like cleaning, to fresh hires, which can lower their morale,” Shibata says of the approach. “When I first got started, I spent three years steaming rice, then three more making the yeast starter. After 15 years, I finally got to make some sake. That’s the way things were. But at Heiwa Shuzo, new employees have the chance to try out every stage of the sake-making process from their first year.”

Each year, when production begins, the entire staff attend a meeting to discuss what kind of sake they want to make, then they continue to share information regularly throughout the year.

“Even though we all stick to the same recipe, everyone ends up with a different flavor. That’s the beauty of creation,” says Shibata with a smile.

“There are many companies where the ‘boss’ has too much power,” explains Yamamoto. “Instead, we try to empower all members of our team. When you have freedom, that leads to a sense of responsibility, which in turn makes everyone more hard-working and creative.”

Heiwa Shuzo receives job applications from roughly 1,000-2,000 hopefuls each year, from which the brewer will select only a handful to take on as new staff. “I want us to be the kind of company that attracts the best!” Yamamoto gushes. In effect, this means that only the most motivated and independently-minded will make it onto his team.

Two things that Heiwa Shuzo takes very seriously are cleaning and maintenance. Once per year, the whole staff participate in a cleaning ritual, coating the entire wooden structure of the brewery with persimmon tannin, a traditional cleaning agent known for its insect repellent, antiseptic and water-resistant properties.

“To produce top quality sake, we need to keep our brewery spotless,” says Yamamoto. “This doesn’t mean we want it sterile like a clean room, more that it should have the tranquillity of a perfectly kept Japanese garden. This will come through in the flavors of our sake.”

Exploring Their Own Vision

Exports are important for Heiwa Shuzo, Yamamoto says, and their sake is served at wine-centric Michelin-starred restaurants overseas. But, Yamamoto clarifies, “We are not consciously trying to make sake that will appeal to wine drinkers.”

“People think of sake as a subtle, delicate drink, but I believe it can achieve the same global popularity as wine. The question is to what extent we can realize this potential.”

“If we can develop our own ideal of what sake should be, I believe sake will achieve true worldwide recognition. The aim isn’t to compete with wine; we are simply trying to make the best sake that we can. I think this is the best way to compete in the global market.”

16 years after he first took over the brewery at the age of 26, Yamamoto believes the first stage of his stewardship has finally come to bear fruit.

“Muryozan is the pinnacle of our KID series, and its success establishes KID as a brand. But as we round off this stage, I also plan on venturing into new areas.”

Yamamoto is not shy of engaging with the world outside of sake. His varied business ventures include an umeshu flavored Kit Kat developed in collaboration with the soccer player Hidetoshi Nakata, and a project with Interstellar Technologies recasting sake as literal rocket fuel.

“To give you an idea of my approach, most people would take some time to mull over a new business proposal, but I prefer to make a decision on the spot. That way you gain momentum and move quickly on to the next stage. I am trying to forge a new path, not follow pre-established models of success within the sake industry.”

Based on their current success, Heiwa Shuzo are now looking forward to the next stage of their development. “Now that we have won the Champion Sake award, I want to find new and interesting challenges in the years ahead,” says Yamamoto, grinning. The sake world waits with bated breath to see what they deliver next.