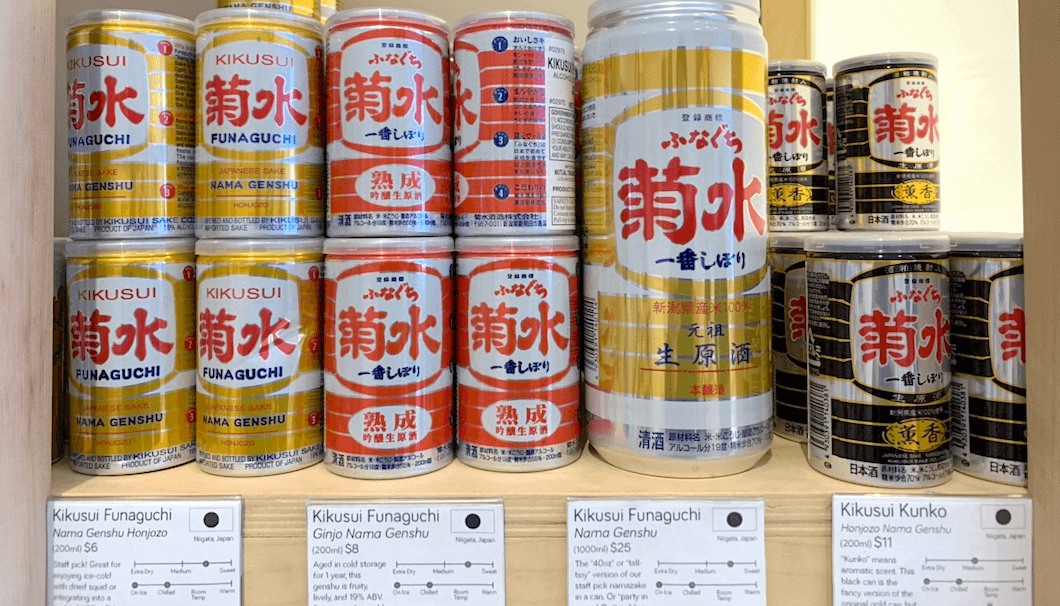 How KIKUSUI USA, Inc. is Redefining Sake in America

Sipping sake from a can could very well become a prominent scene in the beverage’s future.

Here we are, a world where brewer KIKUSUI’s Funaguchi  Ichiban Shibori canned sake is selling like gangbusters stateside, with young consumers snapping up 70% of KIKUSUI’s export sales volume. Has canned sake – and KIKUSUI specifically – managed to crack the “cool factor” lusted after by an entire industry? It could very well be that KIKUSUI’s commitment to building roots in North America, which began in earnest with the establishment of it’s independent U.S. subsidiary, KIKUSUI Sake USA, Inc., in 2010, may finally be paying off.

One of KIKUSUI USA’s biggest goals is, unsurprisingly, to help popularize sake in the United States. These efforts are already beginning to bear fruit,with the somewhat out-of-left-field success of KIKUSUI’s canned line leading the charge.

To get a better idea of how KIKUSUI is reshaping Americans’ relationship with sake, we spoke with KIKUSUI USA General Manager Shinichi Kanai.

KIKUSUI first turned its eyes abroad around 1995, and, the story goes, it all started with a single American restaurant’s specific request for a shipment of KIKUSUI’s Funaguchi Ichiban Shibori canned line of drinks.

By 2000, shipments to, and orders from, the US had picked up steam of their own accord, inspiring KIKUSUI to take the plunge and go all-in on a market whose sales figures were clearly indicating a very real interest in sake.

KIKUSUI could have sent a couple of besuited Japanese employees to the US once or twice a month, signed a couple of contracts and called it a day. That would have kept them on par with most of the competition. But KIKUSUI knew that educating an American public that was clearly drawn to the then-exotic product would not only translate to bigger sales, but also provide a valuable service to a legion of would-be customers thirsty for sake knowledge.

Realizing they could kill a lot of proverbial birds with a single proverbial stone, KIKUSUI built KIKUSUI USA in 2010 with a combination of dispatched Japanese workers and local hires, enabling the company to build closer relationships with liquor stores and restaurants, and engage more actively with the US’ sake-curious.

Kanai had already worked at an American food company before moving to KIKUSUI in 2012; in fact, KIKUSUI onboarded him from within the US and he took the helm managing KIKUSUI USA almost immediately.

Kanai is joined by 10-plus-year KIKUSUI HQ veteran Takeshi Endo, and together they run a small and tightly-knit ship of local team members, either recruited right there in the Land of the Free, or sent over from Japan to serve long-term. 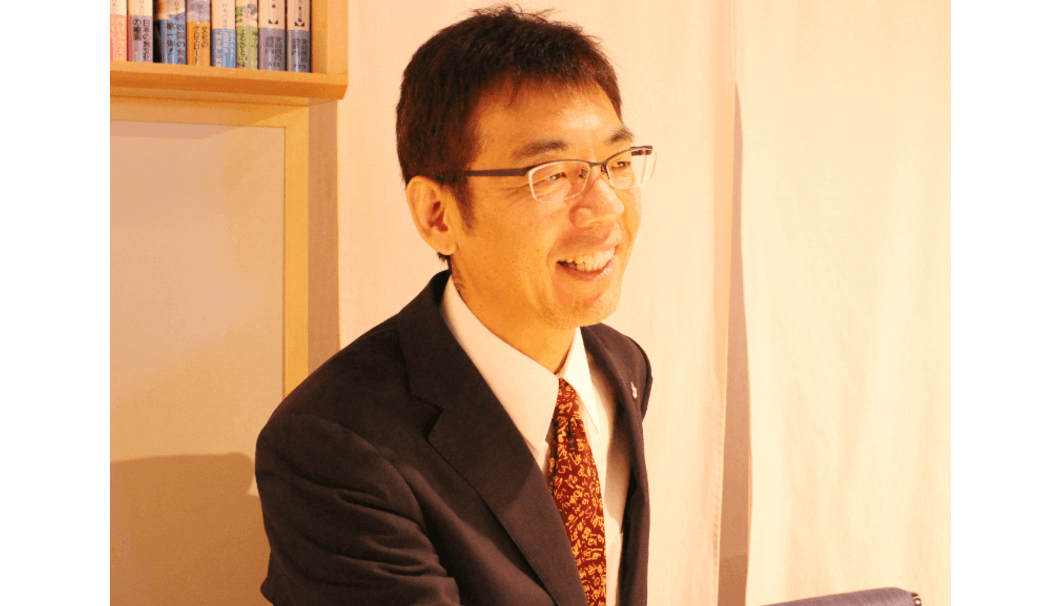 “We’ve got three people in sales, and our responsibilities aren’t by region, but by role,” explains Kanai. “We each do what we’re best at. It’s a style only the KIKUSUI USA subsidiary practices. The HQ in Niigata lets us do our own thing, if that’s what works [in America]. We’re really happy about that.”

Mr. Endo and Ms. Matsushima, for instance, primarily sees to Japanese wholesalers. The Japanese-English bilingual Leo handles both Japanese and locally-owned restaurants in New York and is responsible for wholesalers and wine shops elsewhere. 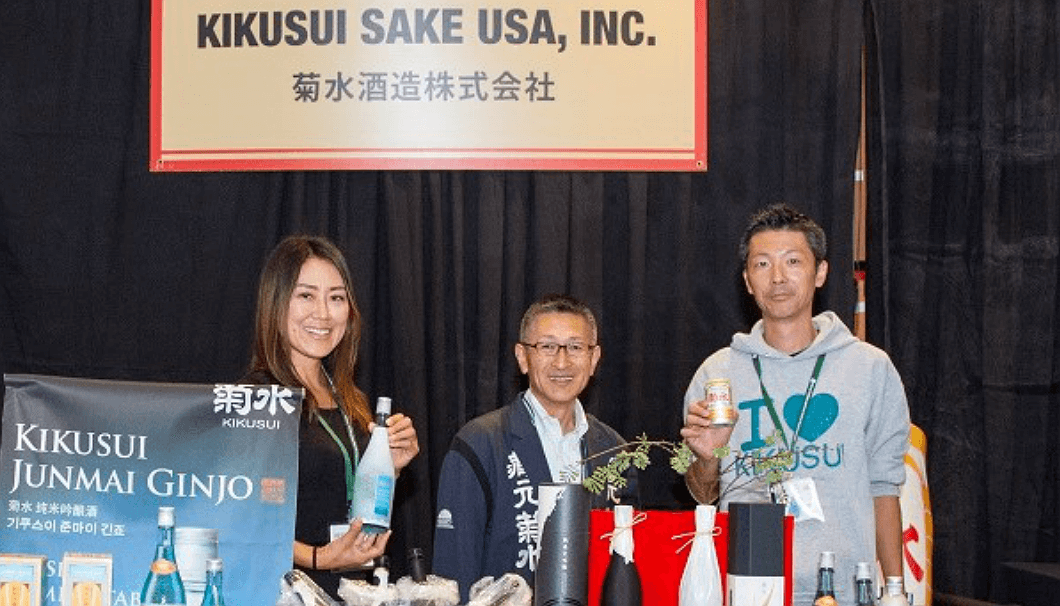 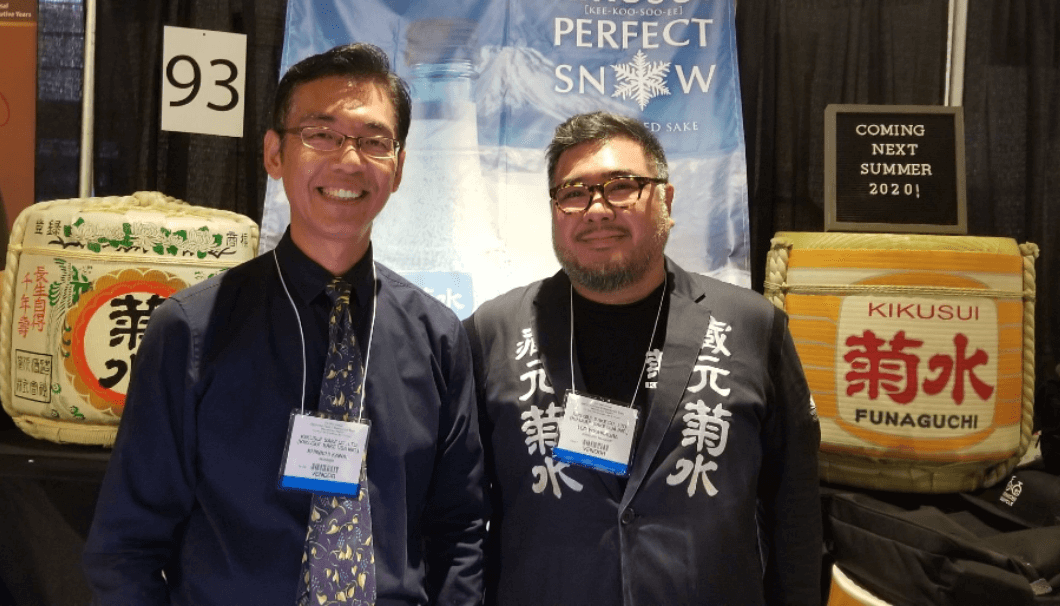 Having successfully obliterated the language barrier, KIKUSUI USA’s ability to communicate efficiently with local businesses, sake fans, distributors, and headquarters back in Japan has landed their sake in approximately 5,000 restaurants across America.

In light of KIKUSUI’s growing figures stateside, we asked Kanai what the company’s secret to success is:

“There’s no secret,” he shrugs, smiling. “It’s all in the legs. You’re just moving from one restaurant to the next. Interfacing with your customers, in earnest; that’s something that translates in Japan and the US alike.”

Kanai also reminds us that just getting someone to buy your product really isn’t the end goal.

“[KIKUSUI CEO] Takasawa says he wants us to enlighten people about sake. That’s not an overnight thing,” Kanai explains. “We’re not just going to come here to America with an explosive ad campaign and start selling by the truckload. Our goal is to slowly grow our roots here in the US, put more people in touch with sake and attract fans organically. We don’t need the flashy approach.”

So what kinds of shops, exactly, are the type to stock KIKUSUI sake?

“But there’s a difference in how people drink from west coast to east coast,” Kanai continues. “There are Japanese restaurants everywhere in California, for example, and there are lots of knowledgeable customers. KIKUSUI Junmai Ginjo has kind of become the default sake [in many places there]. You get a lot of loyal customers. But it also means it’s a tough place for a new brand to get a foothold. We kind of got in on the ground floor so we’ve got a lot of fans who have been with us a while.”

“On the east coast, though… It’s Funaguchi,” Kanai says, referring to those signature cans. “At first, people thought those things looked a little sketchy. Now it’s cool to drink straight from the can.”

KIKUSUI USA staff tactfully explaining the reasoning behind putting sake in a can – so that they can serve up nama genshu as close to straight-from-the-tank as possible – went a long way in popularizing Funaguchi in the States. 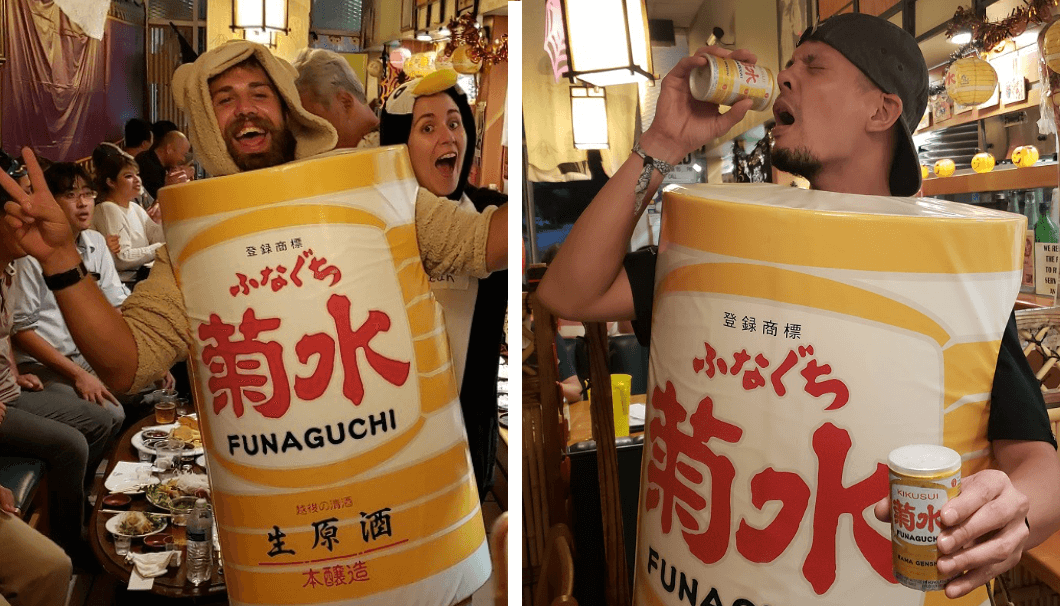 “Some bars here are serving up to 300 cans a month now,” Kanai concludes.

It also doesn’t hurt that one can in the Funaguchi line, Perfect Snow, is available exclusively in the US. It’s a nigori-zake designed and manufactured specifically for the American palate, demonstrating KIKUSUI’s commitment to meeting its customers’ wide range of tastes.

”Nigori has started to get big in the US, so the product is a result of consumer monitoring in the States and the same technology we use to brew our Gorohach’ label back in Japan,” says Kanai. “People in the US drink differently depending on their lifestyle, so we developed Perfect Snow to be enjoyed on its own, or in cocktails, cut with juices or tonics. There are lots of ways to enjoy it.” 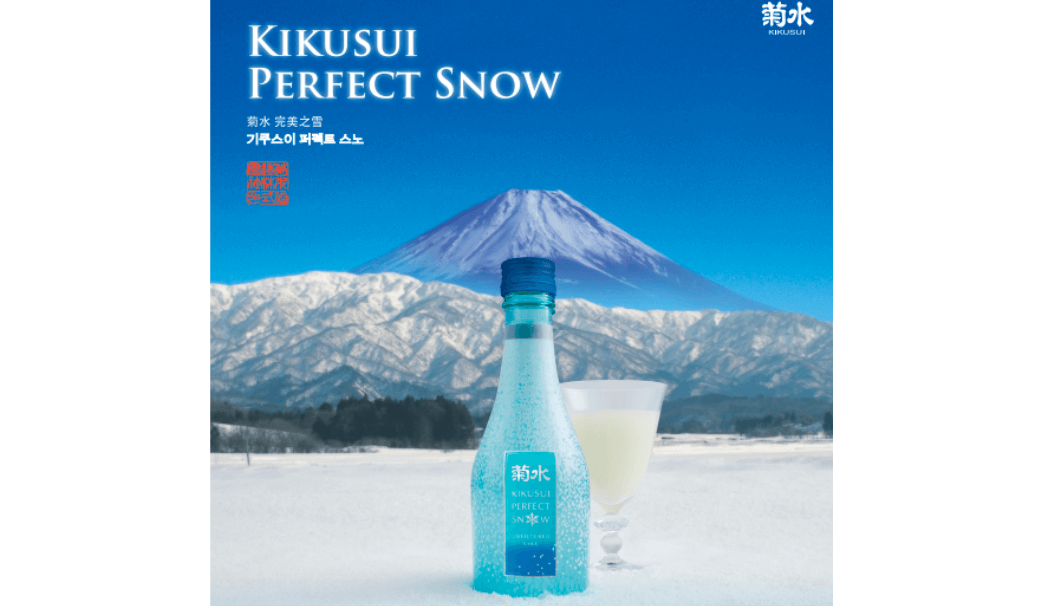 As a drink that pairs perfectly with savory foods, as well as desserts, the company anticipates Perfect Snow to only grow in popularity.

Asked about how KIKUSUI will approach overseas markets in the future, Kanai tells us that, for America at least, junmai ginjo is the primary focus.
And yet, Kanai says, “We’re looking to build a brand and win over fans of KIKUSUI with Perfect Snow, and our unique Funaguchi cans. That doesn’t mean the thrust of our style here is going to change; the priority will always be on interfacing with our fans in America. We continue to hold tasting events about 60 times a year and we want to further grow opportunities to meet directly with the people we serve.” 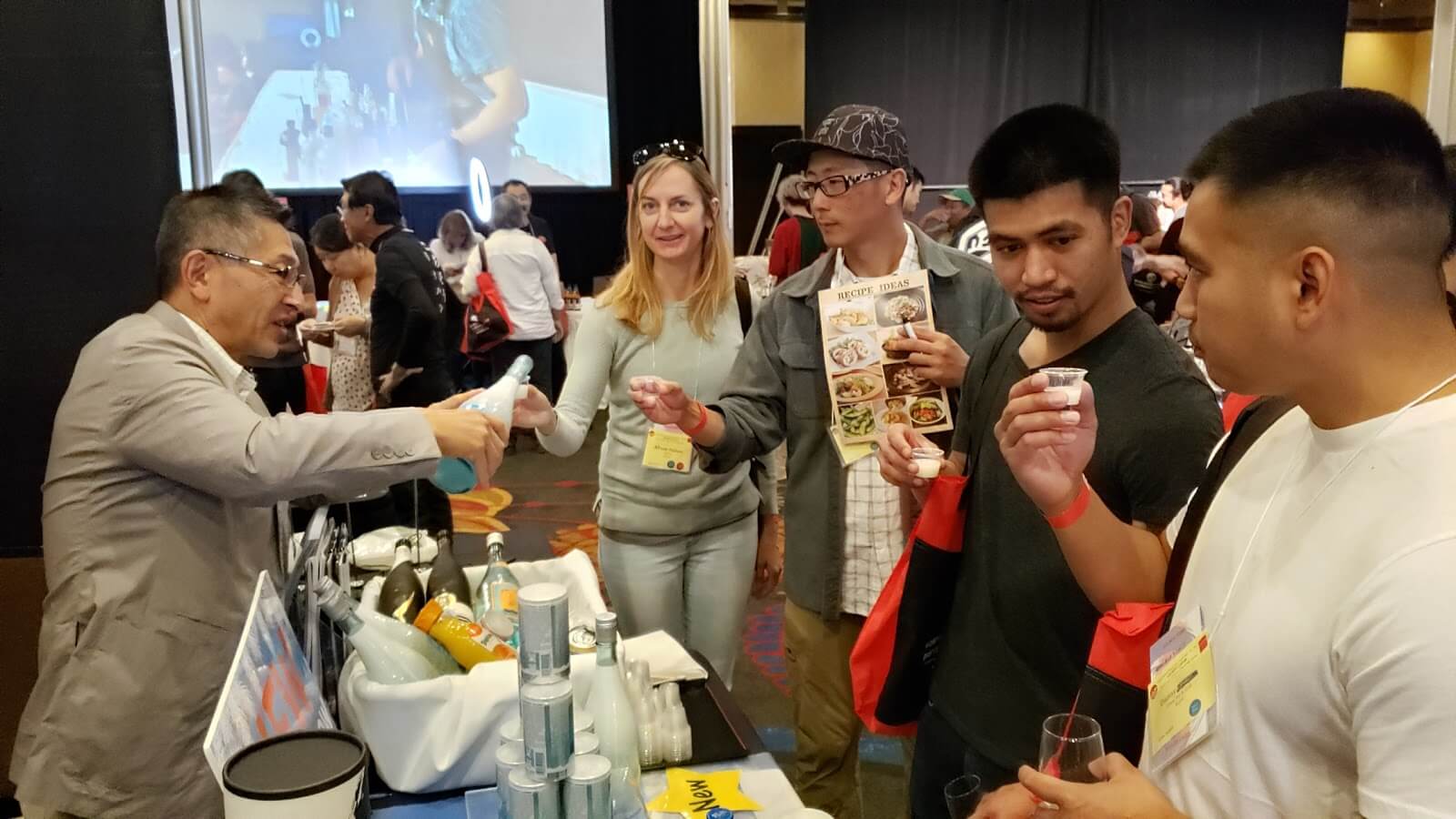 Where many Japanese breweries continue to hold foreign markets at arm’s length, KIKUSUI seems not only interested in its American consumers, but downright smitten with them, committing time, money and manpower to build emotional connections with its US fans.

Which is good, since outside of Japan brewers will need to do more than show up at American doorsteps with a few bottles and an elevator pitch.

KIKUSUI, more than anything, wants consumers worldwide to know sake. Their efforts in the United States are an investment in a future that sees sake on dinner tables the world over, and people of all lifestyles and nationalities excitedly anticipating that first sip after a long day, or selecting it as their quiet drink with a loved one.

Sure, there are clear monetary benefits to KIKUSUI getting into foreign markets like the US early, but it’s also an opportunity to establish a long-term relationship with its fans outside the borders of sake’s tiny island-nation home.

With luck and time, Funaguchi won’t just be the cool drink to swig at Japanese dinners and parties – it’ll be the drink of choice for Americans everywhere.

HOME > How KIKUSUI USA, Inc. is Redefining Sake in America