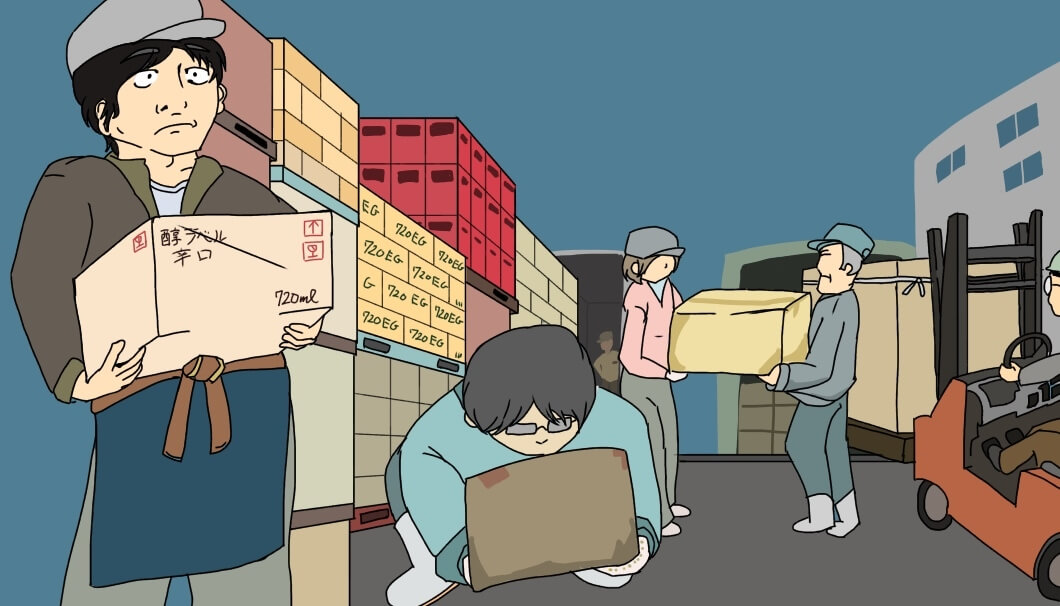 Sake is sometimes seen as a classy drink which belies the hours of backbreaking labor that goes into making it. So let’s take a look behind the scenes at some of the things brewery staff have to haul around on a daily basis and weigh them all for good measure.

The art of sake brewing is heavy stuff, and not just in the sense of the meticulous detail that goes into checking each ingredient and ensuring the best result. It’s quite literally a heck of a lot of lifting, too.

This might be crucial info for those interested in taking the plunge of a “kura internship” in Japan for that first-hand look, so to see just what kind of weights are involved, SAKETIMES went to an actual brewery and measured everything we could find.

Easily, the thing a brewer carries around the most is a bag of rice – sake’s main ingredient.

Bags of rice sold in supermarkets in Japan vary in weight, but a common size for household use might come in at about 5kg (11lbs). It’s manageable for most people but still enough to throw out a back or two on occasion.

Sake production, on the other hand, requires industrial sizes with a standard unit of rice being an ippyo of 60kg (132lbs). In the old days, a brewery worker could easily shoulder one of those, but they just don’t make people like they used to. 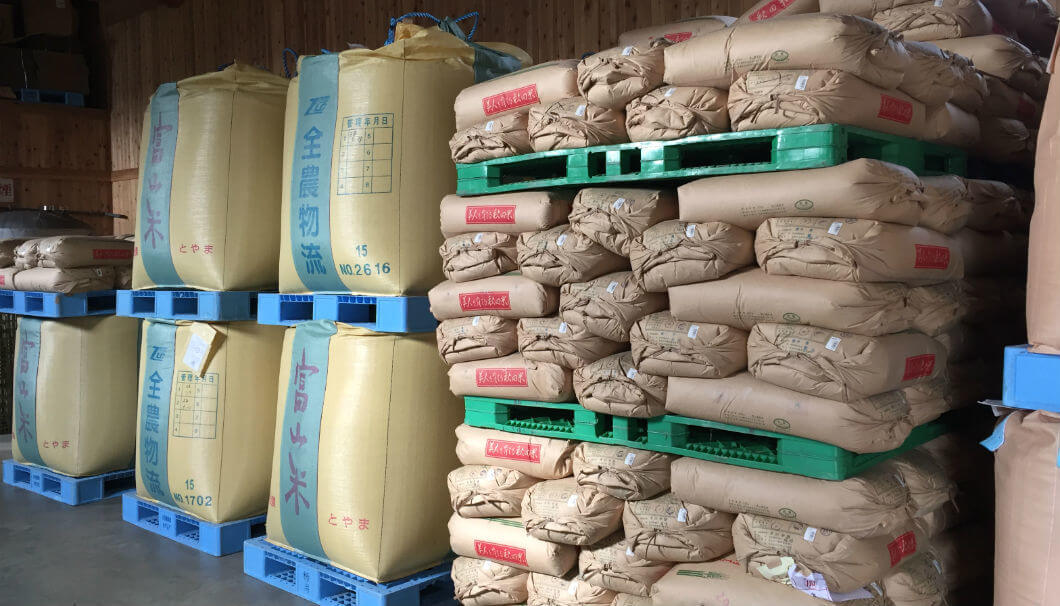 If one of those old-timey brewery hands fell into a time rift and saw how it’s done today, they’d probably scoff at the puny 30kg (66lbs) hanpyo bags carried around today. These half-sized bags are only six times the weight of an average household sack, rather than the 12-times-as-heavy bags brewers labored with back in the day.

At the other end of the brewing process, workers are expected to move around large quantities of bottles. To aid in that are “Dedicated Sake Transport Boxes,” usually just called “P-Boxes.” 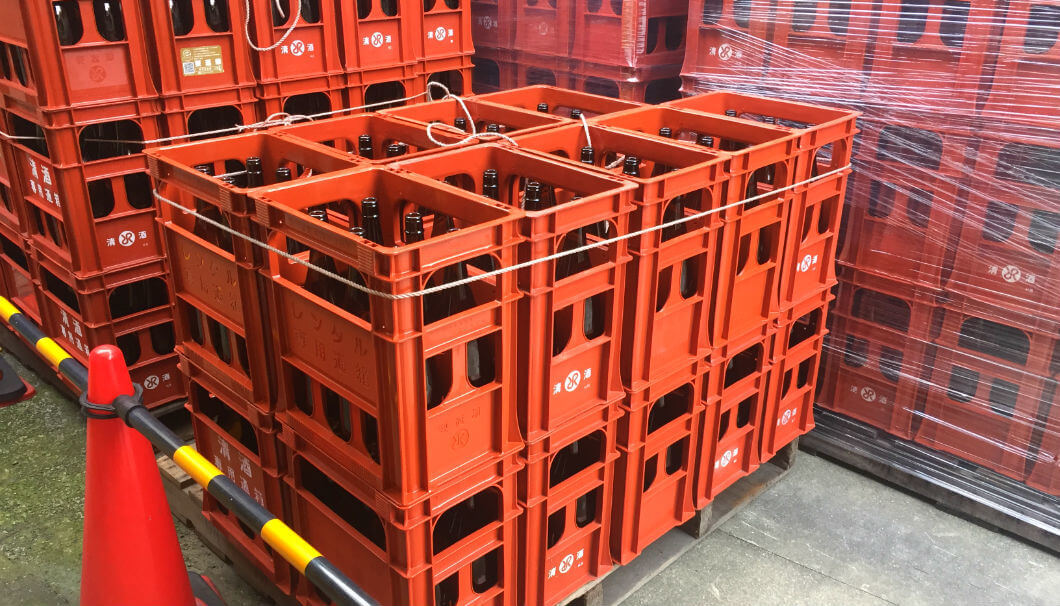 P-Boxes come in two main formats: 6P and 8P, with the number indicating how many bottles each one can hold. The standard size of a regular bottle of sake is 1.8L (61oz) and when weighing a full 8P box, taking into account the weight of the glass and box itself, we get a whopping 24.8kg (54.7lbs). 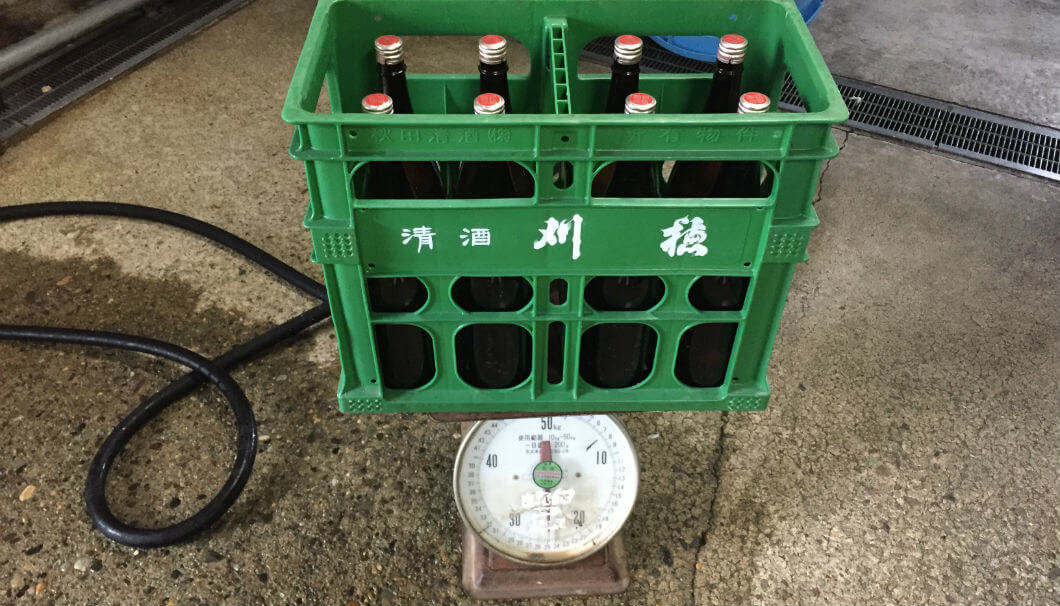 While lighter than a bag of rice, P-Boxes need to be handled much more steadily to avoid breakage. They also need to be carefully stacked and arranged for shipping, which makes dealing with them arguably more tiresome than rice. Luckily, their square shapes are more compatible with forklifts and cranes to give staff’s backs a bit of a break.

It’s also a marked improvement from the wooden boxes used historically. Prior to the P-Box’s introduction in 1973, these wooden frames like the one pictured below used to hold 10 bottles and weigh in significantly more at 31.5kg (69lbs). 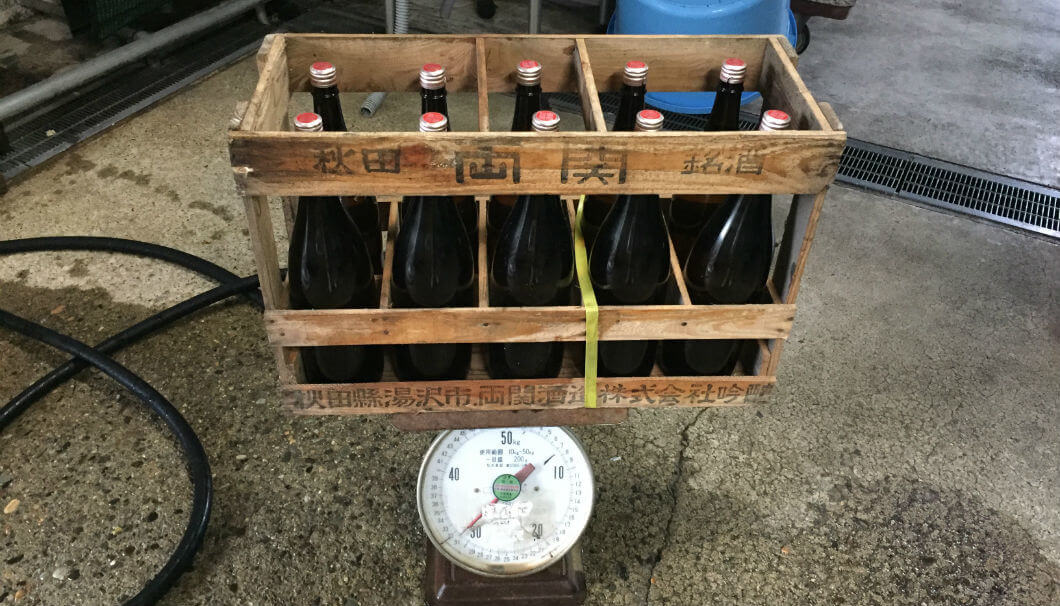 And while a time-traveling sake brewery worker might complain about the weak arms of their modern-day counterparts, they’d probably envy the ease in which P-Boxes can be cleaned.

Naturally, brewing sake involves moving around a lot of liquids. For that, workers employ a special type of bucket called a “tameshi oke” which is made of steel and shaped a bit like a small barrel. The tameshi oke is relatively heavy itself, weighing 2.5kg (5.5lbs) bone dry. 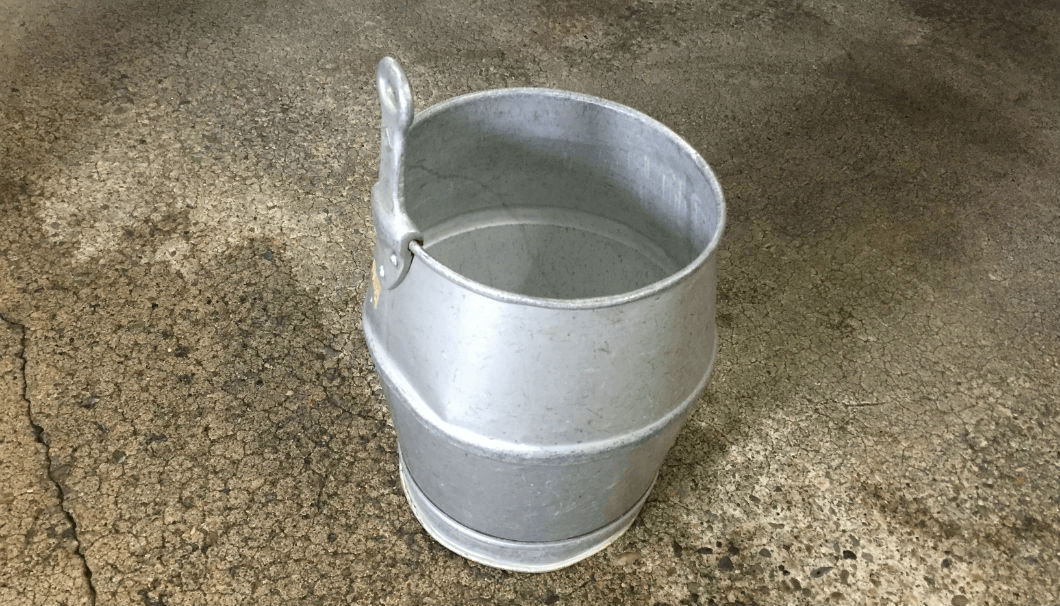 It’s certainly enough to make most people go in search of a dolly, but a true sake brewing pro doesn’t tolerate waiting for an elevator. Instead, they’ll hoist it onto their shoulders and trot it up the stairs. To accomplish this, the tameshi oke has a little handle sticking up. A worker should grab this handle with their right hand and, while holding the bottom with their left hand, lift it onto their left shoulder, as depicted below. 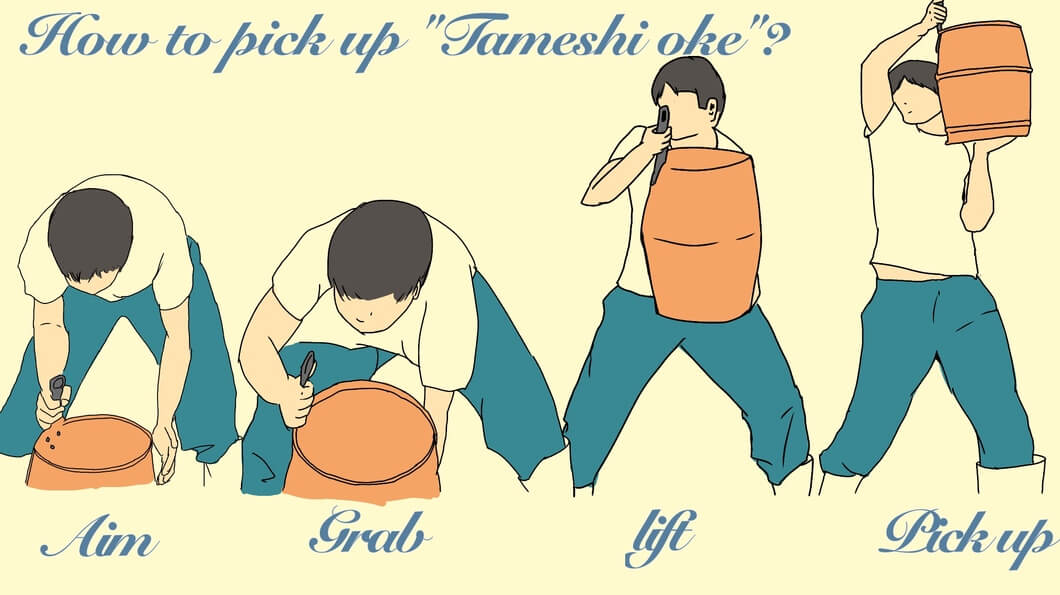 Even Fermentation is Heavy

It might seem like a lot of the lifting work is done during the preparation and bottling stages, but there’s a lot of heavy stuff to lug around in between too.

For example, prior to making the proper sake, a batch of shubo is created to help develop a good yeast count. Because of the various microbiological forces at play in the shubo, it’s crucial to maintain a specific temperature. 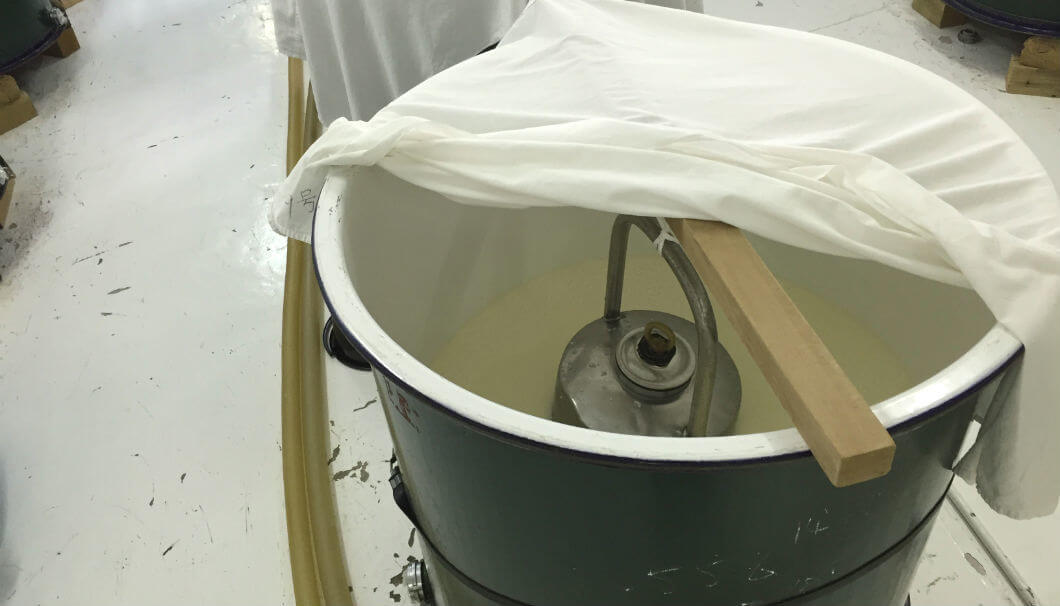 This is done with the help of a heavy device called a “dakidaru.” It’s a 5kg (11lbs) container made of treated aluminum or steel, and it can be filled with hot water or ice and then placed into the shubo to heat or cool it as necessary. 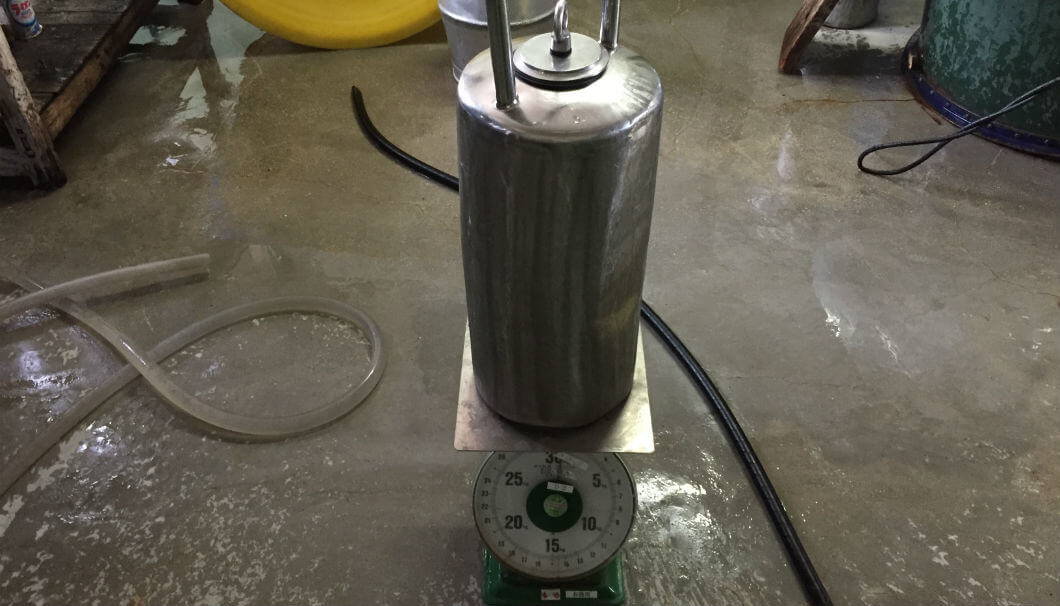 When filled, the dakidaru weighs over 30kg (66lbs), which is on par with other items in the brewery. However, depending on how the temperature of the shubo fluctuates, workers might have to frequently dip in a dakidaru full of hot water, stir it around, remove it from the shubo, pour out the water and put ice inside, dip again, and so on.

Always lift with your legs

It’s enough to make a back ache just reading about these heavy tools and jobs a sake brewery worker has to deal with on a regular basis. But being a centuries-old industry, numerous techniques and strategies have been developed and passed down through the generations to help stay out of a hospital bed.

Some are methods commonly used around the world, such as lifting with one’s legs and keeping one’s back straight while carrying heavy items. Others are specialized to the brewing industry, such as special aprons that hook onto P-Boxes so that workers can use their lower body as well as their arms to carry them around. 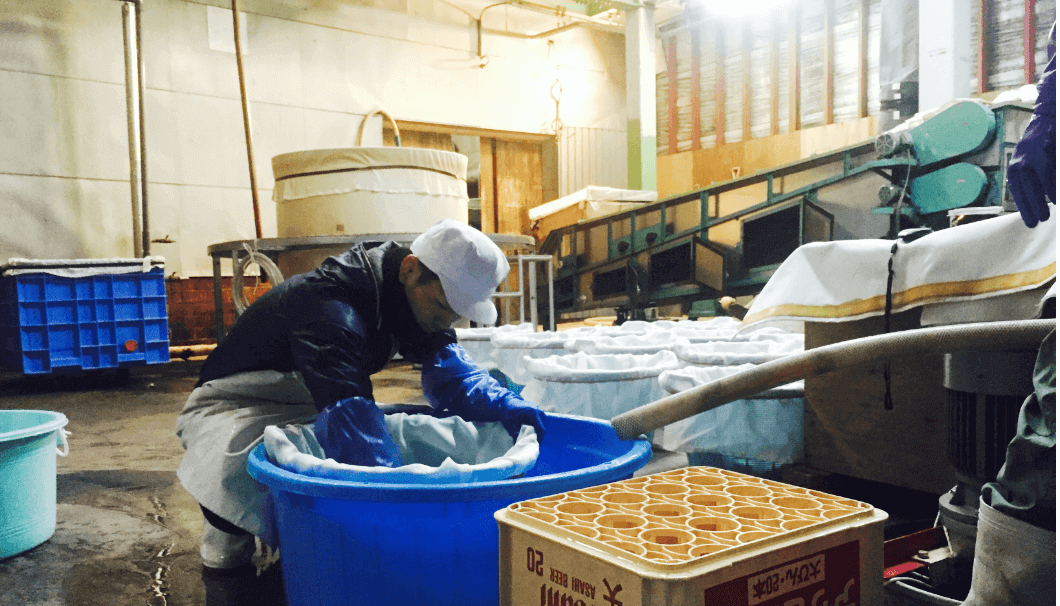 Additionally, breweries are constantly looking for ways to lighten the loads, not only for the well-being of staff, but to reduce shipping costs. As sake gains traction internationally, lighter packaging is essential to keep costs down.

This complex balancing act itself is a constant burden for breweries and workers in order to bring their product to shops and restaurants around the world. So, for anyone still willing to intern at a sake brewery, we salute you.

As for everyone else, next time you take a sake brewery tour, ask to hold some of the things mentioned above to see how heavy they are for yourself. Also, don’t forget to thank the staff for the hard work and dedication they put in to keeping our glasses topped off with our favorite drink.