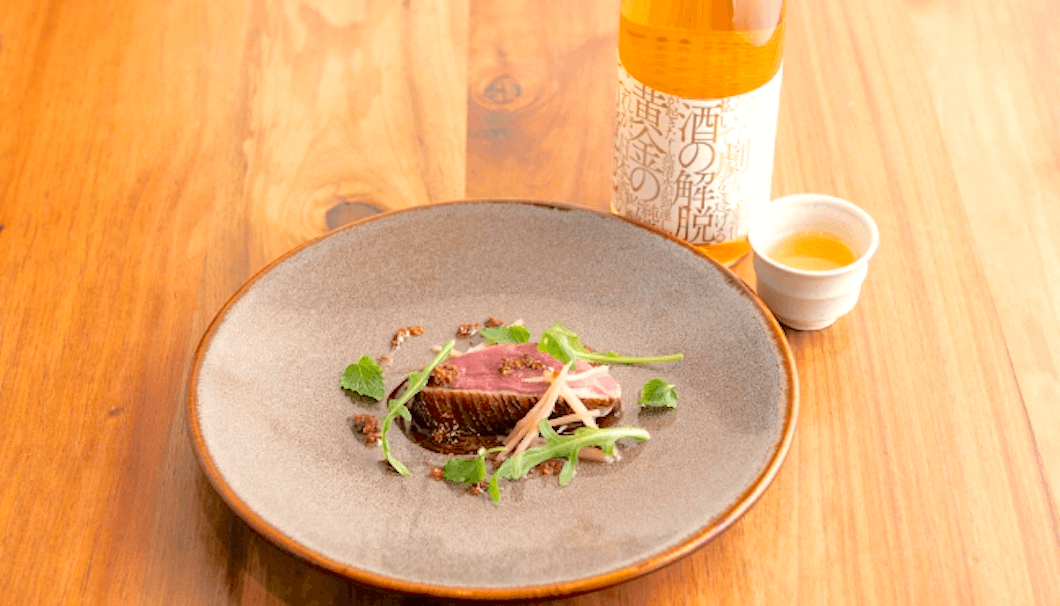 In the news this week: A brand new variation of sake is delivering Parisian chefs into spiritual bliss. Then, a simple yet cleverly effective sticker may help global sake sales. Finally, 20-somethings are likely to spend more on sake for themselves and loved ones, according to a recent survey.

Top chefs in Paris are quickly embracing an entirely new type of sake, after it was introduced by renowned restaurateur Louis Robuchon Abe. Kaon Jukusei Gedatsu is a junmai daiginjo that has properties unlike any other sake on the market. 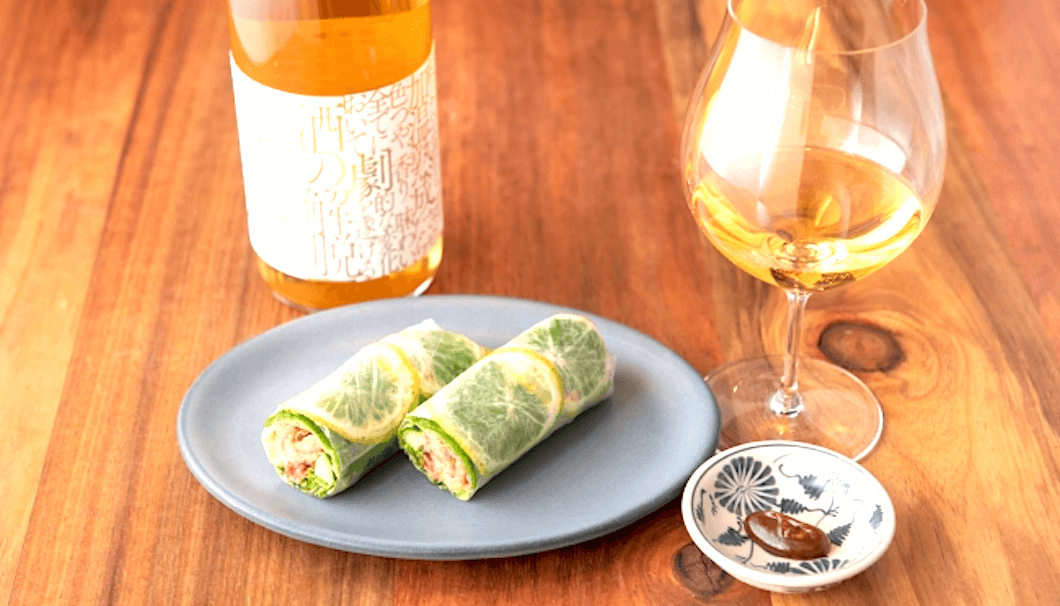 The name literally translates to  “Heat-Added Maturation Nirvana,” in which “nirvana” is sake jargon that refers to the point that aged sake develops sediment. In the case of Kaon Jukusei Gedatsu, “nirvana” is achieved much faster than with regular aged sake by raising the temperature. A bottle can achieve the same color and aroma of a 10-year sake in as little as six months.

This process has traditionally been considered uncouth among brewers until Akita Shurui Seizoh, based in the prefecture of the same name, dared to unleash a completely new taste that combines the complexity of an aged sake with the surprisingly fresh sweetness of a standard daiginjo. 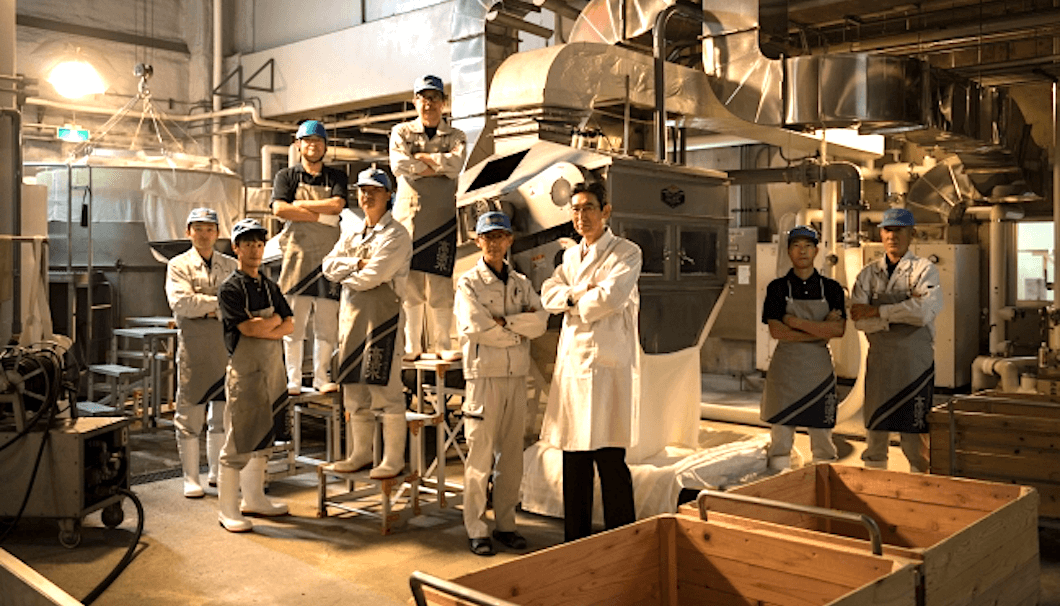 After Robuchon became acquainted with Kaon Jukusei Gedatsu at an Akita trade show in 2017, sommeliers such as those at the elite Parisian restaurants of Alain Ducasse have sung the praises of this flexibly-flavored sake that can be paired with a wide range of foods.

Combining the best of both aged sake and fresh daiginjo, Kaon Jukusei Gedatsu is a bold new offering that is certainly worth experiencing for fans of either.

One of the big challenges of selling sake overseas is ensuring that it’s delivered at the proper temperature in order to maintain its optimum taste. If a sake spoils in transit, then customers on the other end may dislike the product without ever knowing its true flavor.

To combat this, the city of Tsukuba in Ibaraki Prefecture, in cooperation with Inaba Brewery, are currently testing a new system that can effectively ensure that sake is shipped under the proper temperature controls with ease.

A dedicated app can read both the product information from the code and determine what temperatures it’s been subjected to by its color. This guarantees that each bottle has been in the correct temperature range through a simple monitoring process.

The first tests will go live in early March for a sake shipment bound for Singapore.

If successful, this will be an important step in facilitating the sale of sake all over the world and could ensure that the sake you drink in Hong Kong or London is of the same quality that can be found in Japan.

Clear Inc., a start-up that deals with sake-related business, recently conducted a survey to gauge the sake drinking and buying habits of people in Japan. After receiving over 2,000 responses, some surprising results emerged regarding younger consumers.

Overall in Japan, the most common amount of money that people expect to spend on sake for personal use is 1,000 yen (US$9) per bottle. If the sake is being bought as a gift, then most people would set aside 2,000 yen ($18) for it. 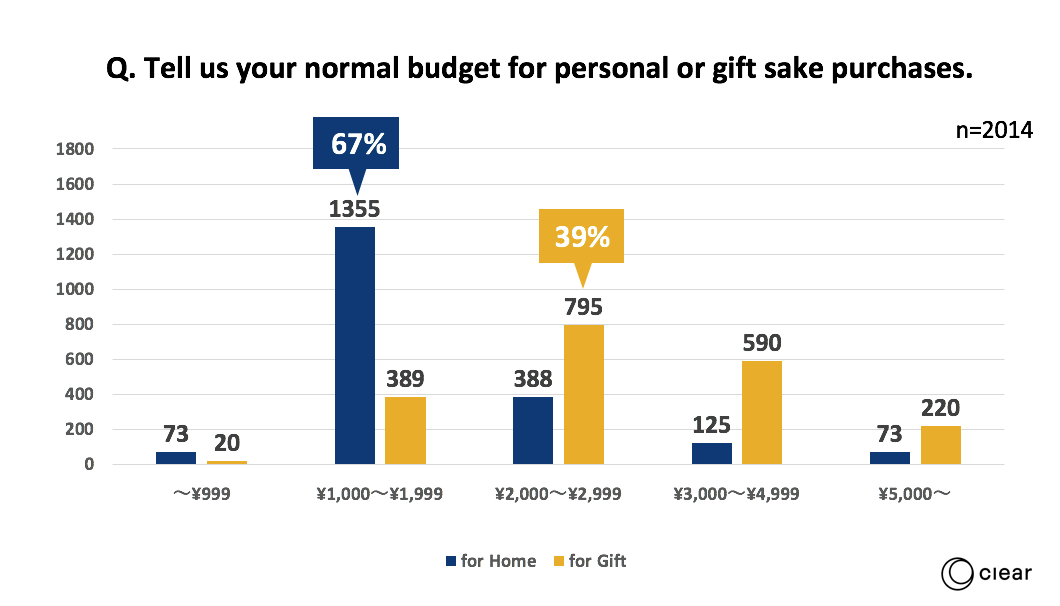 But, when looking only at people in their 20s and 30s, about 50% would spend around 3,000 yen ($27) for a bottle of sake to give as a gift. Only 30% of those in their 40s and 50s feel the same way. People in their 20s also accounted for the majority of those willing to spend 5,000 yen or more on a sake gift, indicating that the demand for high-end sake may be skewing younger. 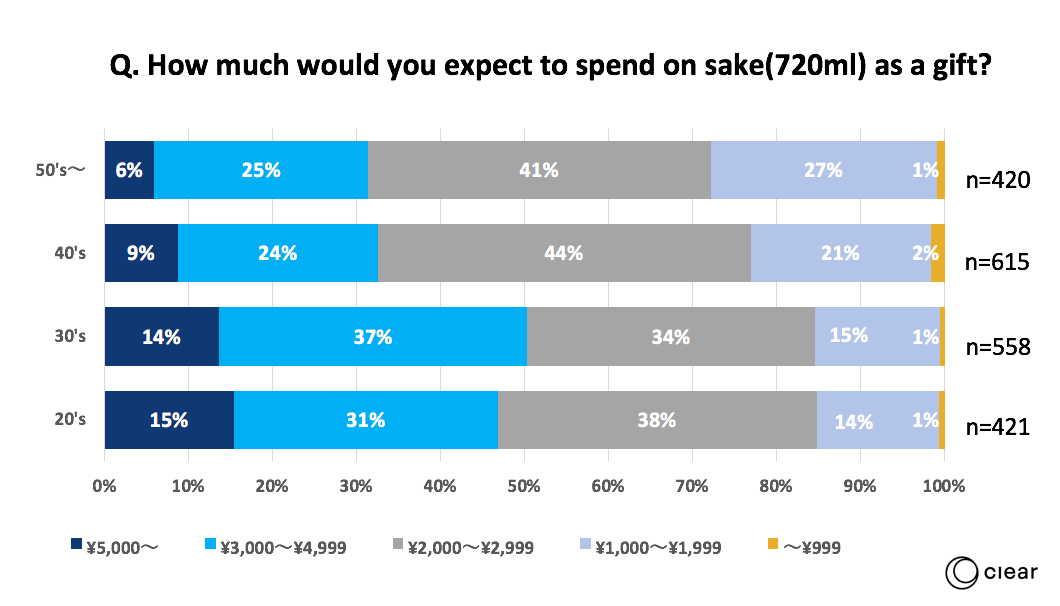 Other interesting trends that Clear found in their survey included the emergence of “sake girls,” women in their 20s and 30s who drink sake more than four times a week. Sake girls in their 20s have doubled since 2017 and those in their 30s have shot up by 50% in the same time. Women also prefer to drink alone out, whereas men prefer drinking sake alone at home. 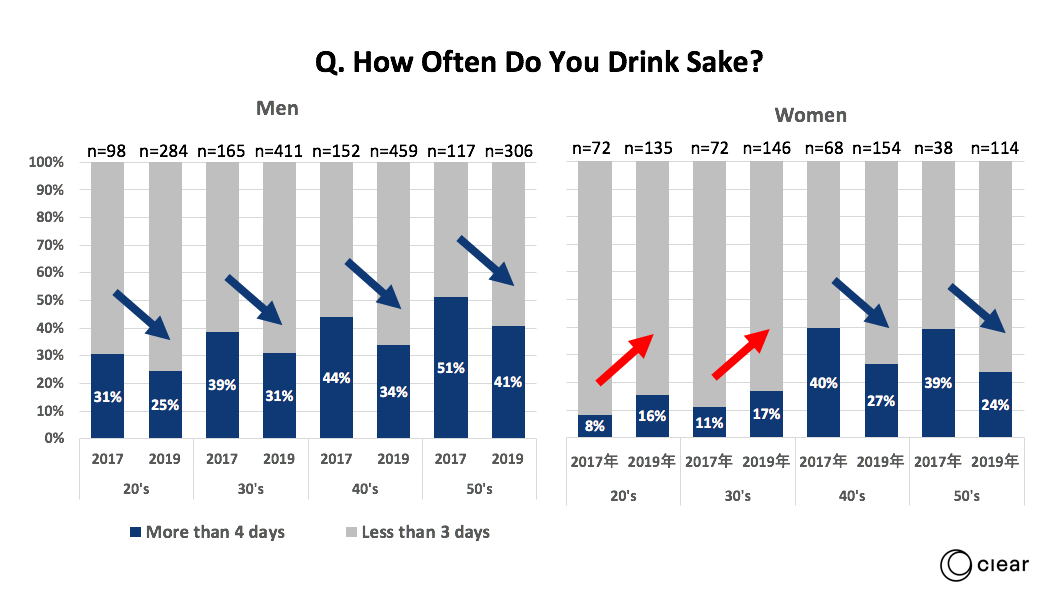 While stories of a shrinking sake industry are often reported, these survey results are an optimistic sign that younger drinkers are still enjoying sake and are willing to spend good money on it, too. It would seem that recent efforts to reach out to women and younger people with the likes of low-alcohol and sparkling sake offerings is having a positive impact.