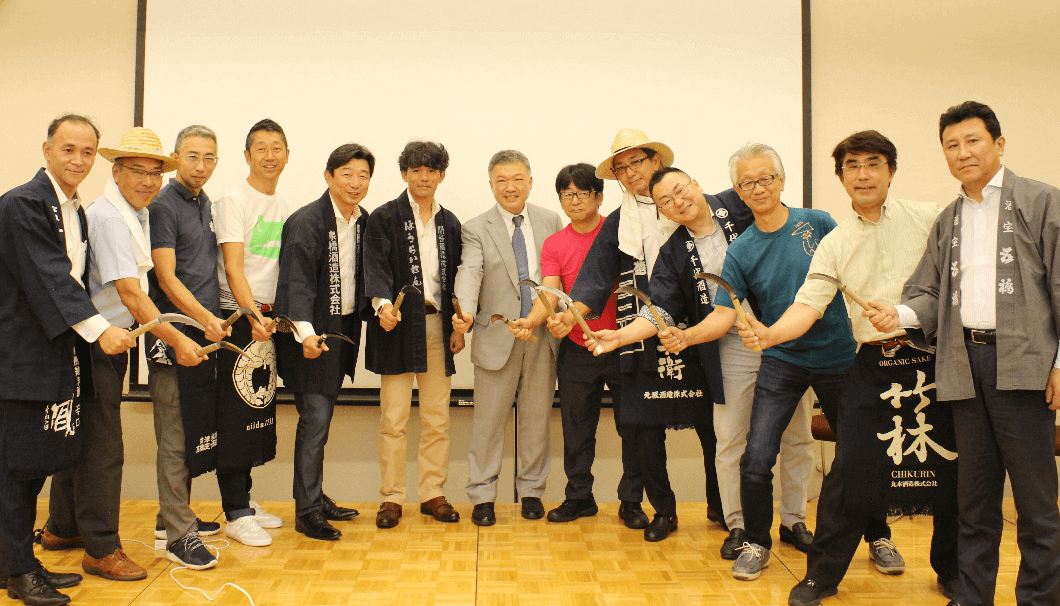 The sake industry is currently in a new state of change. Domestic demand is continually slipping and yet global sales have never been better and continue to grow. This leaves the producers at an interesting crossroads the likes of which they have never seen before. For one group of 12 breweries, the key to drinkers’ hearts worldwide and to the future of sake lies in sustainably and locally produced organic rice made in-house.

When in Wine Country, Do Like the Wineries Do

Although an inherently different drink, sake is often grouped in with wine because of its “fruity” profile and similar alcohol contents. Among wine enthusiasts, though, the concept of a terroir – the provenance of a wine – is crucial in gauging the characteristics of a particular brand.

At a recent meeting of the The Association of Agricultural Breweries (No! To Ieru Sakagura No Kai), certified Master of Wine Kenichi Ohashi spoke to a group of 12 sake breweries from across Japan. “It’s said that 95% of winemaking is determined by the quality of the grapes,” he tells the audience, pointing out that winemaking is largely seen as an agricultural practice rather than an industrial one. 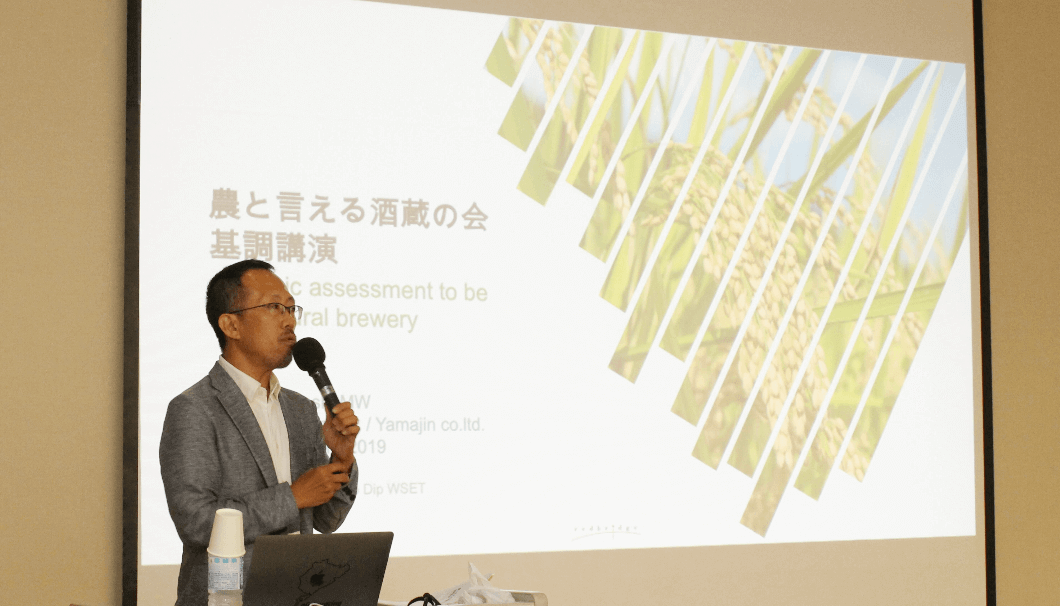 A wine’s provenance is so important because the quality and characteristics of the grapes that make it are so dependant on soil and climate. This almost mystical crossroads of human effort and natural providence is part of what gives wine the romantic image it’s enjoyed for centuries.

If this is the way many enthusiasts view wine, then sake breweries may find an easier way into new drinkers’ lives by producing and marketing sake with a similar mindset.

Unlike wine, sake has traditionally focused on brewing technique, rather than on ingredient provenance. This is partially because rice is a grain which is much more easy to store and transport than grapes, and thus easier to grow in one location and brew with in another. 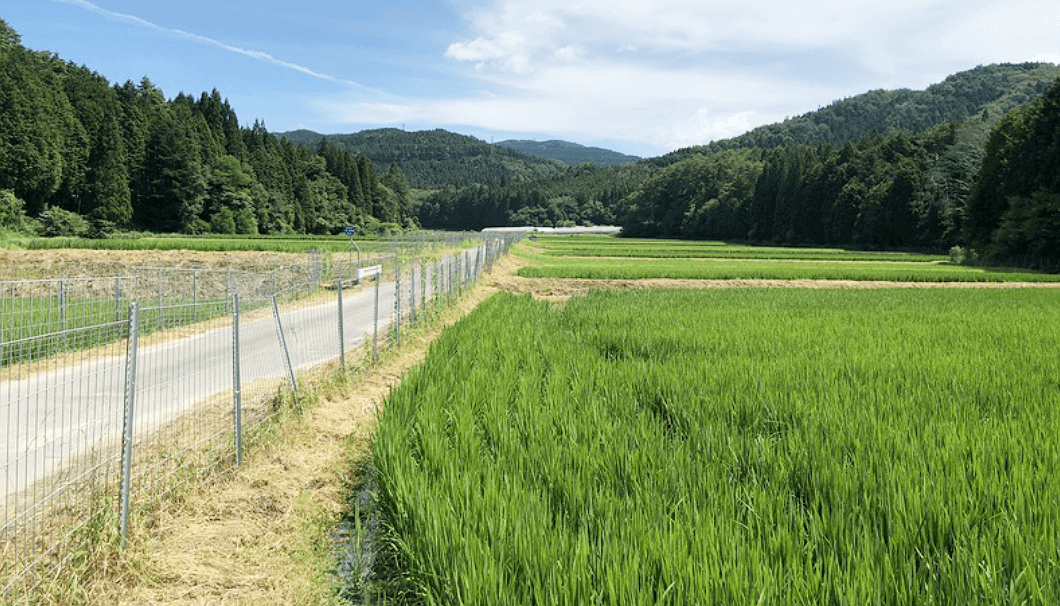 Additionally, until the end of the 20th century, sake was by far the main alcoholic beverage available in Japan. This meant demand was huge and industrial production techniques developed to meet it, wherein mass-cultivated rice from a handful of sources was used in most sake brewing nationwide. This system remains largely in place today.

This certainly takes a lot of labor off of the sake brewery’s hands, but creates a disconnect between sake and its source rice. One brewery who decided to begin farming their own rice, Marumoto Brewery in Okayama, found that a lot can be learned and gained through the extra effort of in-house cultivation.

“When we started making our own rice,” Jinichiro Marumoto told the Association, “We made large, high-grade grains of rice, but that perception has since changed.” He explained that the fertilizer used to make such rice was increasing the protein content to levels above that which would make better sake. 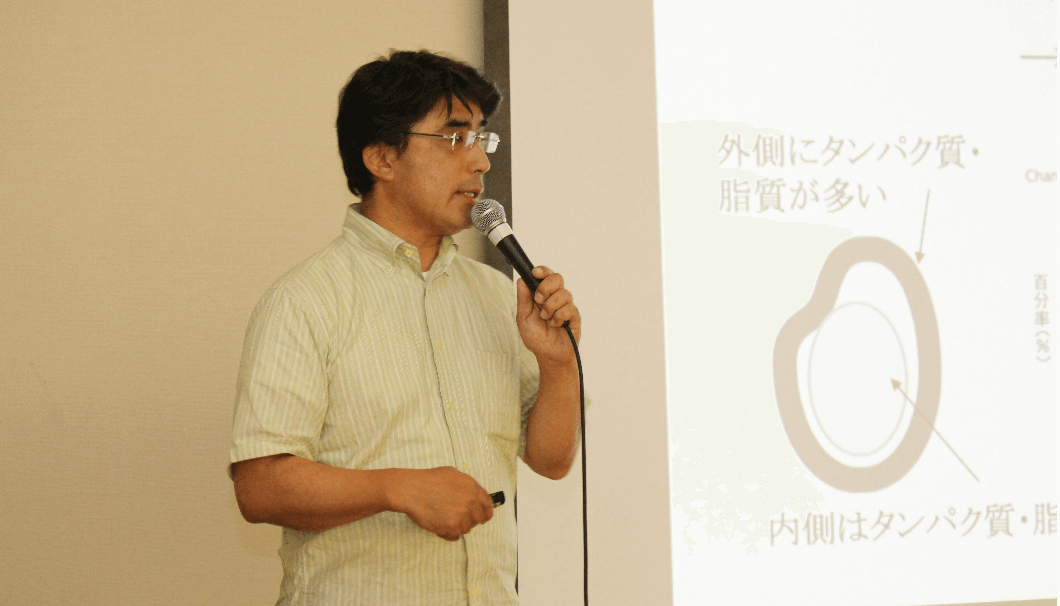 So, with the help of agricultural experts, Marumoto Brewery developed a method to regulate the protein content as the rice grew and ultimately created a more suitable sake rice than they had ever used before. “The fact that we can cultivate sake rice that matches our sake brewing is a result of consistently carrying out everything from agriculture to brewing,” said Marumoto.

The Association of Sake Breweries

Marumoto’s story is just one example of the benefits of self-cultivation of rice. The Association of Sake Brewers Focused on Cultivation was formed as a way for these trailblazing breweries to share what they’ve learned and help each other build what they hope will become full-fledged culture of sake terroir. 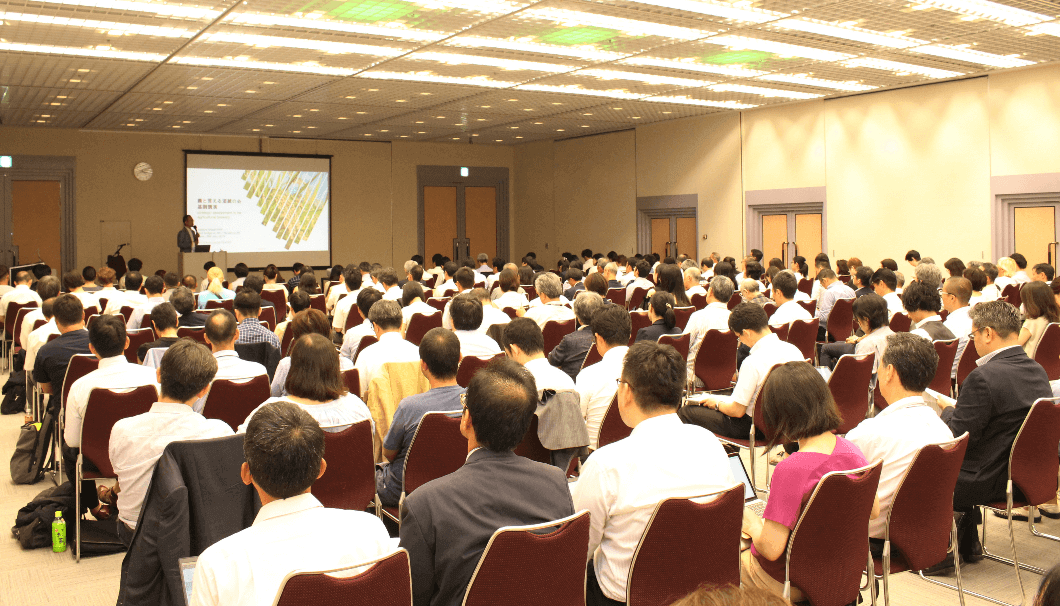 Small-scale rice producers like Akishika Brewery in Osaka and Sekiya Brewery in Aichi enjoy the ability to make organic, pesticide-free crops which are impractical for large-scale rice farmers to grow. Sekiya Brewery has also been inheriting land from Japan’s rapidly aging farmer population, contributing to the sustainability of high-grade sake rice production on a large-scale.

Meanwhile, Izumibashi Brewery in Kanagawa Prefecture has turned to tech to help optimize results from both growing rice and making sake with it. By being able to closely monitor the rice production they can compare how different varieties of rice, grown under different conditions, and by different farmers, affect a sake in the end. They are also looking to implement drones for data collection.

A Terroir Too Far?

Different sake brands already have a lot of individuality in taste and textures, but by also taking control over how the raw material of rice is produced, this personal quality can become even more impressive. It also has the potential to be easier for foreign wine-lovers to understand and get accustomed, as sake continues its efforts to grow overseas.

That being said, there are pitfalls to the self-cultivation route. As Master of Wine Ohashi pointed out, these breweries will be far more susceptible to damage from natural disasters and inclement weather. And as climate change continues to create more and more unpredictable weather, that is a very serious threat to this endeavor.

But the benefits for rice-growing breweries can already be seen, and if the dozen breweries of The Association of Agricultural Breweries – and whoever joins them in the future- can continue in the spirit of mutual cooperation for mutual gain, it could create a whole new class of sake and usher in the era of the true “sake terroir.”