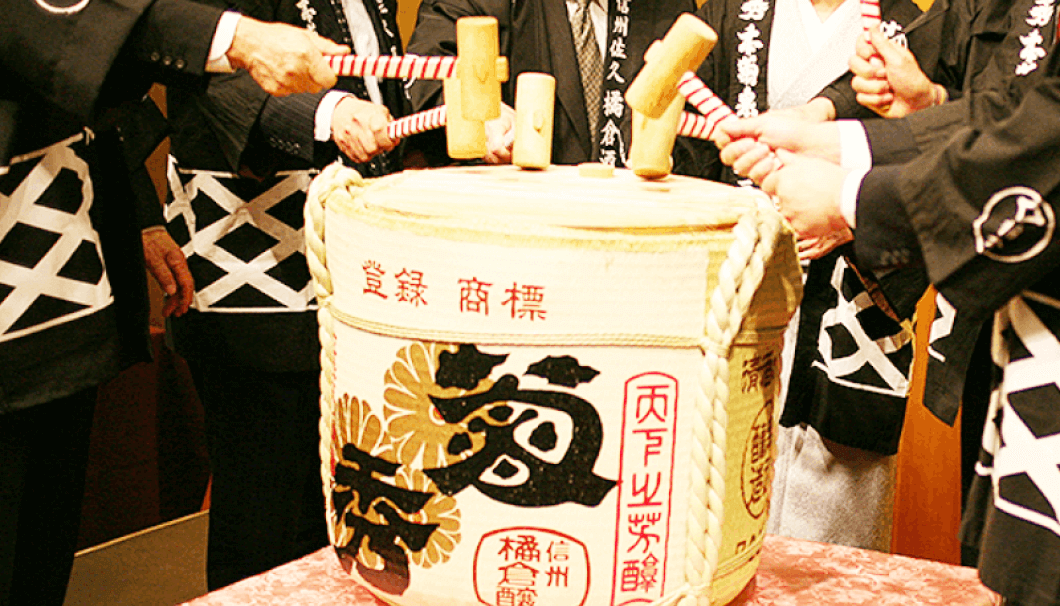 Kagami Biraki (鏡開き, literally “mirror opening”) is a ceremonial opening of a sake cask. This ceremony is held at personal and business events in Japan, as well as community events that mark new beginnings and transitions in the celebrants’ lives. Examples include weddings, festivals, housewarmings, and sports events.

The term is a combination of “kagami,” what people in the sake industry use to refer to the round lid of a sake cask, and “hiraku,” meaning to open.

The tradition began 300 years ago with the fourth Shogun of the Tokugawa era, Tokugawa Ietsuna. On the eve of war, he gathered his top military leaders and advisors to his castle to break open a sake cask. After he achieved victory, the ceremonial opening of a sake cask became custom throughout Japan.

The ceremony begins when the guests of honor strike the lid of the wooden sake barrel, called a taru (樽), with a kizuchi (木槌) wooden hammer. Depending on the size of the crowd, the taru can hold between 18 and 72 liters of sake. Then, the sake is poured into square wooden masu (桝) and distributed to all guests to share the good fortune of the cask opening.

The term kagami biraki can also refer to the Japanese New Years’ celebration of breaking the ornamental mochi rice cake tower, which is called kagami mochi (鏡餅). The mochi is broken with a hammer or by hand. The pieces are then enjoyed  in a sweet or savory soup. Both traditions are a means of praying to Japanese deities for good health and fortune.