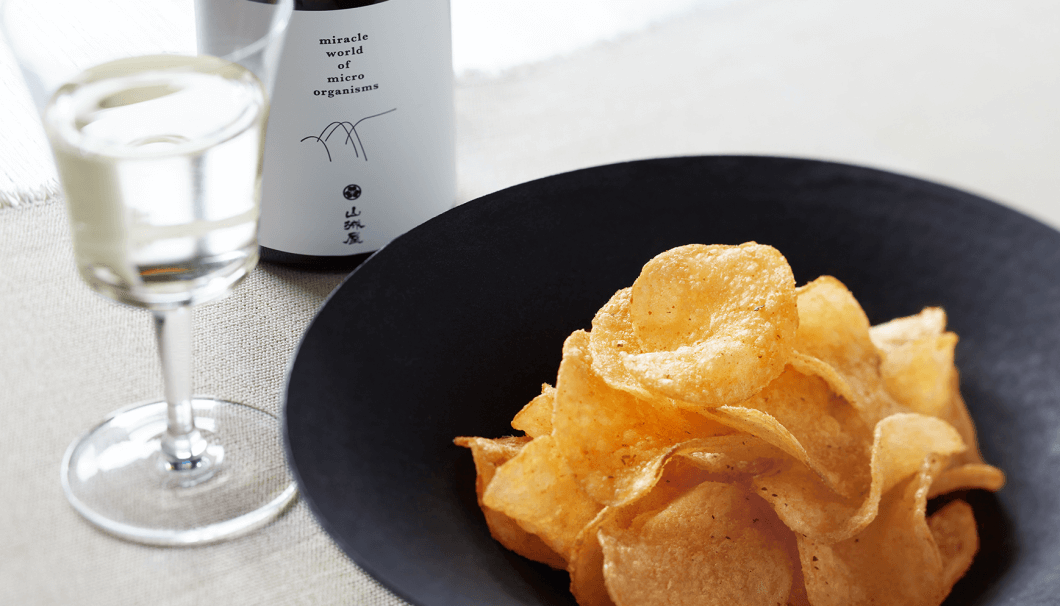 In the news this week: A very special flavor of potato chip with the sole purpose of pairing with Yamashiroya sake. Then, for those having trouble navigating the complex world of sake flavor, a new AI system is here to help. Finally, a former Hermès VP lends his talents to the luxury sake brand SAKE HUNDRED.

Koshimeijo, a 174 year-old sake brewery in Niigata Prefecture, has teamed up with major snack maker Koikeya to produce an ideal pairing of sake and potato chips.

To pair with this sake, Koikeya conducted multiple trial-and-error tests and consulted with Koshimeijo regularly to find the right flavors to season a brand new potato chip recipe with. In the end, the companies settled on a blend of shrimp, oyster, and olive to create a deep seafood flavor that’s neither too strong nor too easily overshadowed.

The resulting chip brand is called Mikansei, meaning “incomplete” in Japanese. Yamashiroya Special Class sake is also said to be “incomplete” unless enjoyed with a pairing dish, making this an ideal combination for enjoying sake with snacks.

Sets of both chips and sake are now on sale and include one 350 mL (12 oz) bottle of Yamashiroya Special Class and three 50 g (1.8 oz) bags of Mikansei chips. They will be sold for 2,178 yen (US$19) in a specially-designed package to commemorate the partnership and are being rolled out throughout October at both companies’ online shops as well as liquor stores in Japan that carry Yamashiroya.

Scentmatic, a business that specializes in “scent design,” has developed an AI system that builds a constantly evolving vocabulary to describe the subtle flavors of sake. It accomplishes this using Internet data, responses from over 10,000 users and expert input from sake sommelier Keita Akaboshi.

On October 1, the AI Kaorium for Sake system debuted at the izakaya Kyoto Sakagurakan and makes selections among its range of sake from 42 breweries in Kyoto.

The touchscreen interface of Kyoto Sakagurankan’s bar-mounted tablets is based on the three elements of “cool,” “full-bodied,” and “warm” and offers selections based on branching keywords as well as color gradients to help users visualize the flavors they prefer.

Kyoto Sakagurakan got involved in the project because they found that human communication was limited when it came to expressing subjective concepts of taste. AI Kaorium, on the other hand, can both teach and learn the most commonly used terms for different elements of flavor and aroma, based on its interaction with users.

Scentmatic says that by associating these keywords to flavors, drinkers can also develop a more sophisticated sense of taste and gradually detect the subtle differences that exist between sake labels.

On October 1, Mineaki Saito became an outside director for Clear Inc., the company behind the global luxury brand SAKE HUNDRED and bilingual sake news and information website SAKETIMES.

Saito has an extensive history with the world-famous luxury brand Hermès, dating back to 1992. In 1998 he became the president of Hermès Japan and worked as the vice president of the company’s headquarters in Paris.

For over a year he had been a brand advisor for SAKE HUNDRED.

In regards to the new position Saito said, “it’s exciting to be working with a young group who are thinking about creating something from scratch rather than patterned on other luxury brand models.”

Clear Inc. CEO Ryushi Ikoma is also optimistic about the new partnership, saying, “Mr. Saito is a person who enjoys problem-solving and creating as a team… and I value his humanity even more than his experience and abilities.”

The SAKE HUNDRED brand began in 2018 and has amassed international awards and accolades. In the coming years they hope to expand even further, especially in new markets around the world.