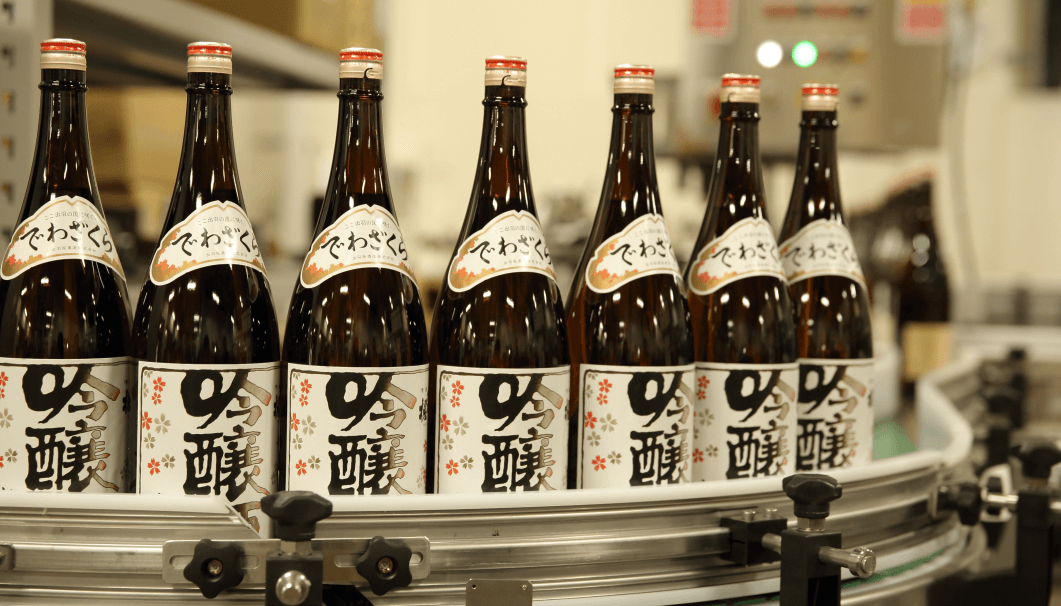 Dewazakura inadvertently contributed to the ginjo sake boom when it gambled on sidestepping government regulations.

Established in 1892, Yamagata Prefecture’s Dewazakura Sake Brewery kick-started a national trend for ginjo-style sake with the 1980 release of their signature Dewazakura Oka Ginjo. The success of this brew was such that, for many, ginjo remains synonymous with Dewazakura.

In this era of rapid change, the venerable brewery’s forward-looking approach has won it fans across generations, but how did Dewazakura navigate their rocky road to success?

At present, the taxable sake output of Japan has dropped from its 1973 peak of just over 1.7 million kiloliters to under a third of that amount. Likewise, between 2000 and 2016, the number of operating breweries fell from 1,977 to 1,405; an average of three businesses closing their doors per month.

“In terms of raw materials, the sake made between 1970 and 1980 used up enough rice to feed roughly nine million people for a year. That equates to about 900 million 1.8L bottles of sake. Taking into account the population and the amount people drank at that time, it is fair to say the average adult male consumed about twenty 1.8L bottles per year.”

A rosy picture, to be sure, but the industry back then was still regulated by the old tier system, in use from 1943 to 1992. A statutory amendment in 1949 then saw an initial six sake grades reduced to three: special grade, first grade and second grade. Breweries that wished to sell special or first grade had to submit their wares for grading assessments.

Higher grades also incurred higher tax rates. In effect, all this meant that only large producers could afford to sell special and first grade sake, while smaller regional breweries became associated with the second grade. Dewazakura fell into this latter category.

To challenge the big players and develop their business, Dewazakura saw only one option under this tier system — to compete on the strength of their ginjo. This decision was to prove fateful.

The brewery sidestepped the grading assessments and sold their ginjo to consumers as “unranked second grade sake.” Up until that point, Dewazakura had brewed ginjo exclusively for competition, but because the low grade put their sake into a reduced tax band, the brewery could sell it for a reasonable price. This, in essence, allowed Dewazakura to shift gears to an all-new business model.

The brewery’s strategy came to fruition with the 1980 release of their flagship Dewazakura Oka Ginjo. With its graceful, aromatic flavor, the unorthodox new sake soon became a smash hit. And although their approach drew some criticism at first, this only strengthened the brewery’s will to succeed.

Dewazakura managed to ride Oka Ginjo’s success into enduring popularity. Kamota sums it up like so: “As a practical solution, we were quick off the mark in shifting our focus to ginjo. That provided the basis for our subsequent success.”

Dewazakura take their sake seriously and rice is one of their key focuses, explains Kamota.

“When we make sake, we look closely at qualitative data such as water absorption. It’s not that we use any unusual methods, but we are fastidious in our approach. We also use a state-of-the-art steaming tub that gives us beautifully steamed rice without any grains stuck to the container.”

Another distinctive feature of the brewery is that rooms containing yeast are located far away from the other rooms. Placing these rooms near the koji incubation chamber would make it easier to transport the rice koji, but Dewazakura puts cleanliness first.

“Rooms containing moisture are a breeding ground for bacteria, so we wanted to keep the rooms with yeast far away,” Kamota says “It takes more effort to carry materials this way, but if a task can be accomplished with a bit of elbow grease, we prefer to put in the effort.”

Even the brewery layout reflects Dewazakura’s commitment to quality.

Looking ahead at what the future holds for Dewazakura, Kamota says:

“Our base mindset is that we want to promote ginjo. That is how we got where we are today, and people now associate ginjo with Dewazakura, so our basic goal will remain the same going forward.

This said, the sake industry is becoming more diverse. Consumers that were once happy to drink only one kind of sake now demand novelty and diversity, so the challenge we face is how to broaden the appeal of ginjo in this new context.

It has been over 40 years since the release of our flagship Dewazakura Oka Ginjo, and the customers who bought this sake in the early days are growing older and drinking less.

Young people in Japan are moving away from alcohol. It was once a tradition in Japanese workplaces for sempai (veteran workers) to teach junior staff about the joys of sake. But times change, and people go out drinking less than they used to. For this reason, I would like to see producers take on a new role as promoters of sake.”

To fulfill this role, Dewazakura are preparing to open their brewery to visitors.

“Exports are increasing year on year, and we anticipate even more growth in the overseas market. There are many people throughout the world, not just in Japan, who want to deepen their understanding of sake, so I would like to show our brewery to as many people as possible.”