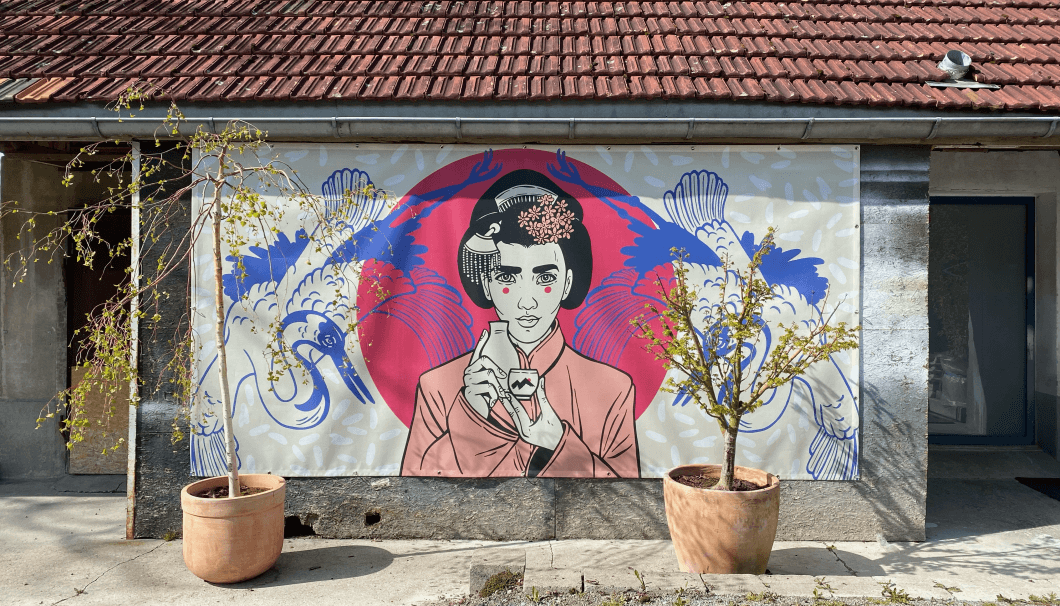 Brothers Oliver and Christian Weibel brew sake outside of Zurich with local flair.

Brothers Oliver and Christian Weibel have shared a love for Japan and its culture from childhood. Now, they are sharing that love with their Swiss countrymen through YamaSake, the world’s only Swiss sake brewery. The self-styled cultural ambassadors spoke to SAKETIMES about bringing sake to a reluctant market.

A Love Born of Food

“Where we really started on our journey to get into the culture of Japan was in the ‘80s,” Oliver Weibel, head brewer at YamaSake, tells SAKETIMES.

“We grew up together and had a lot of opportunities to make our own meals,” adds his brother Christian, the brewery’s PR guru. “And I stumbled on a book about Japanese cuisine … [We were] rolling our first maki sushi back when you couldn’t even order sushi at a restaurant [in Switzerland].”

A birthday trip to one of Zurich’s few Japanese restaurants later, the siblings’ love for Japanese cuisine and culture really solidified, the Weibels say.

“I tried out some work on bonsai, and in the 90s I studied the Japanese language,” Oliver remarks, while noting he’s mostly forgotten the language element. They finally began visiting Japan in the early 2000s, and once more, it was the food that impressed Oliver.

The brothers have visited Japan four times in total, and these trips are also what introduced them to sake.

“It was all so mysterious … because I couldn’t read the labels. I didn’t know what it was,” Oliver says. Little by little, the brothers got a handle on terms like ginjo, and became further enamored with the beverage. Eventually, the brothers’ sake adoration escalated to the next level.

From Beer to Sake

Christian remembers, “We were talking over beer at a birthday party about our next project … and the idea came up, you know, why was no one brewing sake in Switzerland? And from that day on, the journey started.”

The brothers, who had some experience with home-brewing beer, began to look into the process and history of sake-making. They found that there had been attempts at Swiss sake before, but none had gone very far. They didn’t let that discourage them, though.

“We thought, OK, the journey can take longer. It could be difficult … compared to brewing beer,” Oliver explains. They soon learned that the process was even more different from beer than they had expected, and their first step would have to be learning to make koji.

Koji – rice inoculated with the mold Aspergillus Oryzae – is not only a key part of sake brewing but is a key element of Japanese cuisine, too.

“When I started studying to make sake, that was the first time I learned that koji is used in making miso and soy sauce,” Oliver says, and explains that he started taking online classes, and even went to in-person fermentation courses to learn to make fresh koji.

“It was like a mystery box for us at the beginning. You have these spores, and they need to have the right temperature and humidity, and then they grow. But we had no clue what was right, or if it was dangerous if it went wrong.”

But with time and patience, and after navigating complex koji spore supply lines, YamaSake’s rice koji has become a pillar of their business as local residents learn to cook with it. Judging from local feedback, the brothers say, YamaSake’s fresh koji is a minor blessing for the area’s home cooks.

The next major barrier to successful brewing has been equipment. Christian expresses frustration at this roadblock: “That is a constant dialog between my brother and me because in theory we would need to have the original Japanese tools for making sake, like to build a proper koji muro (the room sake brewers use for making koji) or to have a fune press…”

Right now, all of YamaSake’s equipment is improvised from items available locally.

“There is a lot of bricolage, a lot of tool-crafting on our side,” Christian continues. “We still struggle a bit, I would say, with the last step, the pressing step. That’s one we still haven’t cracked because it’s almost impossible to get the proper press from Japan to Switzerland.”

Even with all of these challenges, though, the brothers have succeeded in getting sake bottles out the door with YamaSake Number 1 Craft Sake.

“We designed it very specifically for Swiss tastes and the Swiss market, and we also had tastings for the public to find out whether the Swiss population likes or could like it or not,” Christian says.

Oliver explains that there are still a lot of misconceptions about sake that they have to fight against, as well. “We have to challenge a lot of these clichés. Here, people think sake is distilled, or that it has a high alcohol level. And that it’s always consumed hot.”

The confusion, the brothers say, seems to be caused by a history of Chinese restaurants serving a hot digestif at the end of meals, which became confused with sake. Oliver describes how they have tried to counter such perceptions, noting that the brothers purposefully set out to make a sake totally unlike the misconstrued sake many Swiss imagine. YamaSake Number 1 has an ABV of 11%, compared to the typical 15% or so, for example, as the brothers sought a lower alcohol content. Additionally, they say, YamaSake sets out to brew sake that pairs well with traditional Swiss food, including the country’s famed cheese fondue.

Christian explains that educating Swiss drinkers is essential to their success, because most consumers simply don’t know what to expect from it. He says that if people drink sake expecting wine, they simply call it a bad wine.

“It’s not wine, though! It’s sake!,” He exclaims. He and Oliver are working to counter preconceived notions of sake through education at tastings, and have even made a German-language sake aroma and flavor wheel to help teach drinkers what to expect. “If we tell the people the story about this wheel and about the ingredients, what they can expect, it’s an easy win,” Christian says.

Both brothers insist that, of all the challenges they face, this is the biggest one, and to address it they hope to convince local Japanese restaurants to stock their locally-produced sake.

That milestone, however, remains elusive for now.

“We realized that the product we have is for Swiss people only, not for the Japanese community. They were a little bit disappointed when they tasted it,” Oliver laments. He says that most of the local Japanese community has been too polite to say it directly, but some have been more direct. “They were really honest with us and told us that it’s a good local-interest sake, but not one they can sell.”

Christian explains that they are working on both their koji making and their rice to move into a more premium range and hopefully even woo the region’s Japanese consumers. “Number 1 is crafted from an unpolished rice, which of course gives you a bit of that bitterness, but that was what we wanted. And now we’re working with polished rice.”

The first sake they produced used an Italian risotto rice polished just enough to remove the husks, roughly equivalent to a 90% milling ratio. The Weibels say that they were actually satisfied with that, since the low polish brought depth and complexity to their sake. Now, though, Oliver says they’re ready to move to higher polish.

However, higher milled rice simply is not available in Europe yet.

“We also talked to several milling companies about polishing rice, and they don’t even understand us when we talk about … percentages,” Christian says. Getting rice milled to common sake levels of 70% or lower means looking beyond Europe—in this case, to the United States. Christian expresses his dissatisfaction with that, saying, “That’s the bad part of the story, because we really couldn’t get it from any place nearby. So right now it’s coming from the US. It’s not making us super happy, honestly.”

The carbon footprint of international shipping is one issue that they had hoped to address by making sake locally. But without anyone local to mill the rice to a satisfactory degree, at least some of YamaSake’s ingredients will need to be imported until sake awareness gets a better foothold in Europe.

In fact, a lack of awareness is the core cause of many issues YamaSake faces. The Weibel brothers see their overall mission as helping to close the gap in awareness.

As Christian puts it, “We have been in love with Japan and Japanese food for such a long time. Wouldn’t it be great to give something back, to kind of bring this passion and this love to the Swiss? So we kind of see ourselves not as sake makers, but more as ambassadors of parts of Japanese culture.”

That’s why they put such emphasis on selling their rice koji and sake lees, and even post recipes on their blog to teach people how to use both. “A lot of people really get in touch with us regarding that because it is a little mysterious. We aren’t selling the spores, but the rice koji, and we can give people some advice on what they can do with it and try to inflame them with our passion to make their own experience with koji rice or sake lees,” Oliver says.

No matter how their next production, slated for spring, goes, the brothers are ready to follow this path wherever it leads.