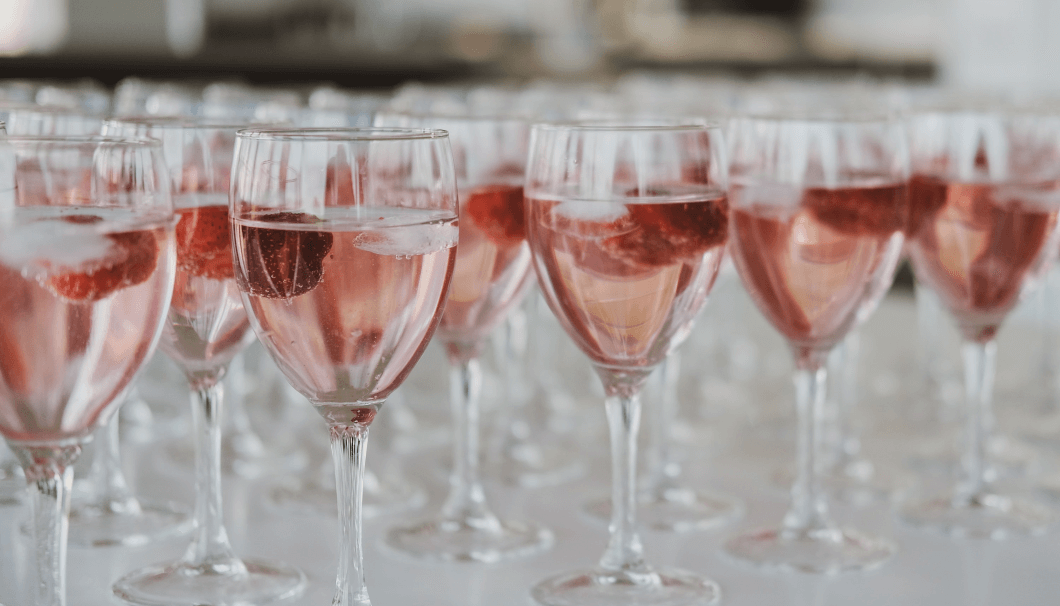 The rosé craze doesn’t end with wine. Here’s how sake is taking pink to the next level.

Once considered unattractive and passé, rosé wine has changed trajectory and become one of the fastest growing segments of the beverage market.

Chasing rosé’s meteoric rise, the likes of sake, beer, cannabis, and even coffee are recently exploring the blush revolution, too. Sake, in particular, is taking rosé to new heights with original production techniques, vibrant rice varieties and more. Sake rosé all day is officially here to stay.

Believe it or not, rice grains are not just white in color! Trailblazing master brewers are producing outstanding products with ancient rice grains historically used for traditional celebrations. One of the most successful sake of this kind is Mukai Shuzo’s ‘Inemankai’ Junmai Genshu from Yosa-gun, Kyoto, made with Murasaki Komachi red rice. This sake has an intense crimson color, but what is most impressive is what’s presented on the palate. Its relatively high acidity balances an off-dry sweetness, with vivacious flavors of cherries, mandarin skin and bacon fat. In the wine world, this sake is most similar to a Saignée method Shiraz or a robust rosé Port.

Proprietary Yeast with a Penchant for Red

Some parallels of this style from the wine world include Spanish Rosado, as well as Tavel, a magenta-colored Grenache-based blend from the Southern Rhône in France.

Dry-Hopping: An Experiment in Florality and Captivating Hues

An unlikely source of color comes from a sake brewer’s take on the addition of hops during beer production. Hops are the flowers of the Humulus Lupulus plant, best known for their role in beer production, that provide bitterness, preservative characteristics and aromas ranging from citrus to floral. Dry-hopping, in the sake context, is the process of adding hops later in the fermentation process for a very brief period. The result is very sophisticated sake with modern Muscat grape-like aromas and a touch of color. Two former beer brewers from the USA who now make sake are creating these interesting beer-sake hybrids with amazing results.

“Pour like a rosé with the nose of an IPA,” is what Brooklyn Kura says of their “Occidental” Dry-hopped Junmai Ginjo. Featuring pungent aromas of honeysuckle and lavender oil, the nose of this brew hints at blossoms; then the palate continues with tropical tones and a lightly bitter finish. Another American producer making strides is Setting Sun Sake Brewing Co. from San Diego, California. They’ve dry-hopped their 2020 “Hoppy” Junmai Ginjo Nama with Citra hops, resulting in aromas of papaya, meyer lemons and herbs.

Beverages that compare most to these unique beauties are Moscato and Frappato blended rosé from Sicily and Lagunitas Hoppy Refresher. While the latter is zero alcohol sparkling water, it includes a variety of hops and showcases their flavor allowing them to shine in a similar fashion.

Umeshu is Japan’s original rosé-like beverage that’s been around since long before the modern rosé craze. Quite simply, the product consists of ume, a stone fruit related to plums and apricots, steeped in shochu or white liquor with sugar. This yields a beverage with rich textures, ample fruit aromas, and shades of red with golden gleams. Certain recipes skirt Japanese homebrewing laws, making umeshu a popular homemade beverage for locals. Colloquially known as “plum wine” in export markets, umeshu is actually closer to a liqueur in style. But there are some fantastic examples of umeshu using sake as a base that can easily cross over into the rosé sector.

Using spirits in their recipe, Choya is the most famous company making classic umeshu today. But there are also small production premium ume sake worth seeking out. Ippongi Hot Devil from Fukui is a sake-based beverage infused with ume essence and hot spices. Chilled straight up is the best serving recommendation, but it can also be combined with milk to cut the heat of the spices. A more elegant rendition of this traditional style is Nanbu Bijin Muto Umeshu made with Junmai sake and ume plums. It displays the natural sugar of the ume with notes of nectarine, nougat and strawberry jam without the addition of ingredient sugar.

The only beverages that come even remotely close to comparing with umeshu are limoncello from Southern Italy and perhaps fruit-infused Sangria cocktails. This is a truly exclusive and historic rosé sake category.

Pink Sake for the Win

Even though rosé may seem like a fad, the staying power of colored sake is all but assured. The industry has developed techniques to add color with hop varieties, by isolating yeast strains or by cultivating ancient rice grains. Combined with umeshu, Japan’s first “rosé,” pink sake will fight against fleeting tendencies and is sure to win the test of time.