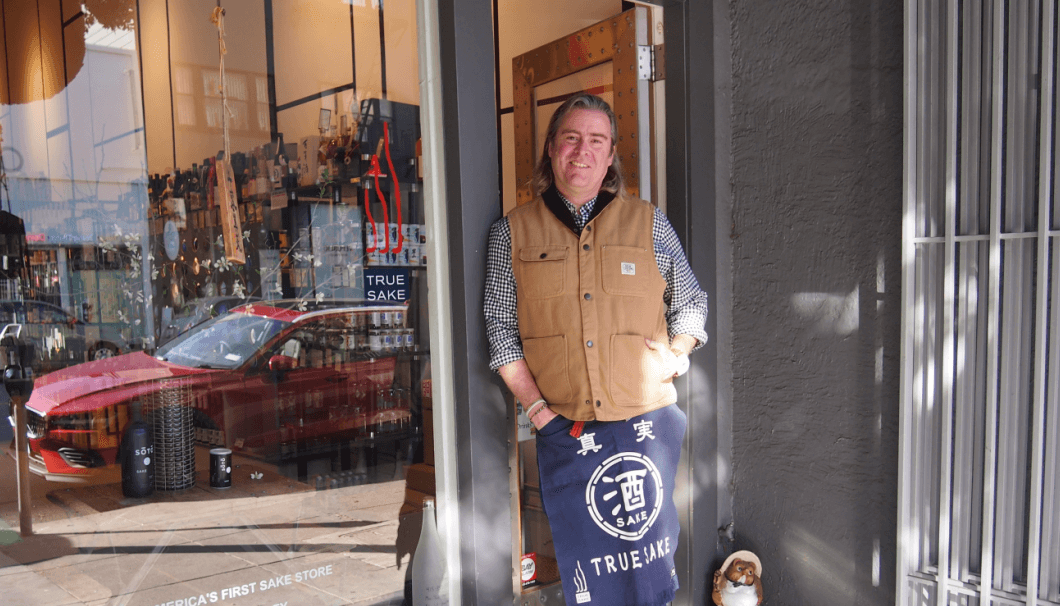 The proprietor of America's first sake store gives us some quick and dirty tips for new sake explorers.

As the founder of True Sake, America’s first dedicated sake store, Beau Timken is  experienced in guiding people’s first steps into the sake world. Since 2003, he’s been selling customers on the idea that sake can be so much more than the warmed-over futsushu they know from the local sushi bar.

In 1994, a chance encounter with some Japanese fishermen in South Africa introduced Timken to the aromatic delights of premium sake and he set out to teach himself everything he could about how plain old rice could miraculously produce a drink with notes of ripe melon. Along the way, he became a champion for sake in the English-speaking world, publishing reviews and a regular newsletter to communicate the knowledge he was acquiring to a wider audience. He also wrote the book Sake: A Modern Guide with food writer Sara Deseran and picked up two professional sake-tasting licenses: A master sake sommelier license, and the designation of Sake Samurai from the Japan Sake Brewers Association.

Suffice to say, Timken knows his stuff and knows how to talk about it in layman’s terms. Here’s what he recommends for sake newcomers:

New to sake and overwhelmed by the choices? Timken deals with this kind of customer all the time at True Sake.

“Every person that comes into the store and says they don’t know anything about sake? They’re lying. They do. They do, they just don’t see it,” says Timken. “If you can speak to your beer and wine preferences, I can help you get into a better bottle of sake. It helps me triangulate.”

“If you like big, bold wines, big, bold beers, you’re not going to like a light, clean, dry sake from Niigata,” Timken explains. The intensity of flavors you prefer in other drinks, the level of acidity or dryness, all of these things can help to slot you into a category of sake you will likely enjoy. The sake reviews on the True Sake site mention comparable wines and beers for this purpose. Shoppers can search for keywords like ‘stout’ or ‘dry Chardonnay’ and find a sake that matches that flavor profile.

2. You can’t take an elevator to Everest

Timken relates a story about a time one of the top waiters in San Francisco came by the shop. The waiter said he just wanted the most expensive bottle, but Timken refused to sell it to him.

“I was like, ‘No! Because I want you to taste the field of sake first before you taste this one.”

Timken compares it to taking an elevator to the top of Mt. Everest. Sure, it would be fun to do, but being at the top of the world has more value when you expend immense effort to get there. It’s the same with sake. If you haven’t had a lot of common sake, you won’t be able to truly appreciate greatness when you find it.

The waiter took Timken’s advice and devoted some time to studying sake. He later returned to express his gratitude and to get that expensive bottle, telling Timken he felt he wouldn’t have been equipped to understand the expensive bottle’s nuances had it been his first brush with good sake.

So Timken advises exploring as much as you can to grasp sake as a category, but also to find the sake that suits you best.

“It’s all about exploration, finding that sweet spot that works for you,” he says.

3. Take ownership of being a sake customer

As the proprietor of a sake shop, Timken of course encourages people to buy sake to drink at home, but he also acknowledges that restaurants are a key venue for that all-important exploration. Still, drinkers can still get a lot of bang for their buck by being a little proactive.

“You can always get a bottle another time. It’s fun to order by the glass. If there’s three people with you, each of you have a different sake,” he recommends.

He also suggests asking for a wine glass, not just because that glassware is better for tasting the complexities of sake but because you may also get a slightly heavier pour. “Sake is expensive and so [restaurants sometimes] hide that by putting it in different size vessels,” he explains.

Since sake oxidizes, you should also ask when the bottle was opened. If it’s been more than a week, ask them to open a new one. Or ask which of the options are still unopened and ask for that.

“Own being the customer. Own it and make them work for you because sake needs to be hand sold, it needs to be talked about, and it needs to be presented,” says Timken. “Make them put you into the glass that’s good for you.”

If you are planning on having more than one glass with your meal, Timken recommends starting with a more expensive pour as an aperitif.

“Start with maybe a daiginjo and then with your meal, come down in price and have [something like] a ginjo,” he says. “You’ll appreciate your junmai daiginjo more by itself… before the flavors of other stuff [are] in it.”

Daiginjo can also pair well, of course, but Timken says these brews generally have the kind of classical complexity best experienced on their own, at least initially. Before you start adding food to the mix, take a moment to savor those notes.

Sparkling sake is another fine choice for a starter, he adds.

This last tip might come off a bit gruff, but it is a reflection of Timken’s passion for sake. It might be his business, but it’s not just about selling product. He wants people to really understand sake and love it the way he does.

“Traditionally, American sake consumers were extremely lazy. They can remember a German beer name, a French wine name, but the curtain went down with anything Japanese,” says Timken, recalling customers coming in to look for sake they’d had with only the vaguest of descriptions. Saying you drank a cold, cloudy sake doesn’t really help staff identify it. “They forget [to take a picture]. They don’t remember names.”

While a broad framework for understanding of beer and wine is often imbibed with the culture, sake still tends to get lumped together as a monolithic category, so it’s up to new sake fans to put in the work to learn the vocabulary, to remember the names of producers, to reflect on their own tastes and preferences, and to note which sake align with them.

As Timken puts it, “Don’t be lazy, because you are only cheating yourself.”