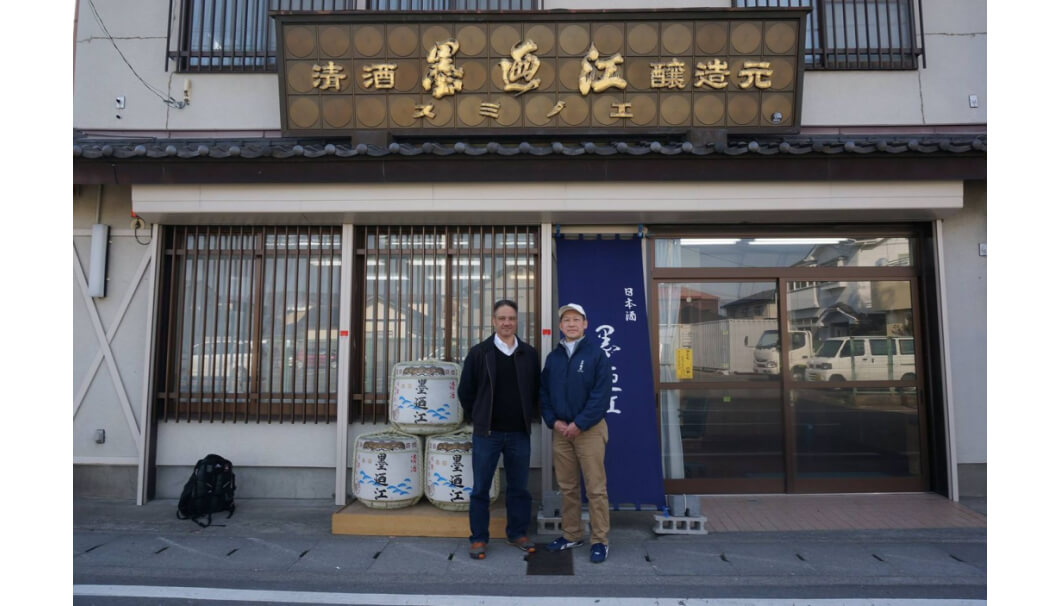 John Gauntner: Learning to Love the Vague and Unfathomable

A man on a mission to bring sake to the world

It’s early in the AM Japan time, but late evening on the east coast of the US, so it’s not surprising that John Gauntner joins our Zoom call with a cup of sake at his elbow, punctuating his comments with little sips. After all, this is the man media often refers to simply as ‘the sake guy.’ It’s kind of his thing.

Relaxing at home, Gauntner sports the nondescript casual clothes and slightly mussed salt-and-pepper hair of the average suburban dad puttering about the house, but even now he’s hard at work. This interview is a contribution to his mission in life: communicating the fascinations of sake to the world so its craft can stand shoulder-to-shoulder on the global stage with beverages like wine and whiskey.

Not that this calling is a burden to Gauntner. It’s clear from his infectious enthusiasm and the way his eyes sparkle even when talking about relative sake minutiae that this is a man deeply enamored with the drink.

“I got Schooled”: An Origin Story

It’s a love story that began back in 1988 when Gauntner, a newly minted electrical engineer, decided to apply for the JET Program to put some miles on his passport while he was still young and free to travel. He ended up working in Kanagawa Prefecture and a teacher at one of his schools invited him to try some sake at a party.

“I got schooled that night,” says Gauntner, who confesses he’d initially been dismissive, thinking rice couldn’t possibly produce that much variety. “I learned there was so much to this [drink] that I had never even considered or thought about and I got really into it.”

From that formative encounter, the course of Gauntner’s life changed. He continued to teach English and then took an engineering job in Japan but was all the while learning about sake, getting pulled deeper into that world. A chance encounter led to an invitation to write a column about sake for The Japan Times, then an offer from a bar owner acquaintance to use his space for English sake classes. Eventually, after what he calls ‘a million cascading coincidences,’ his passion morphed into a career.

Gauntner now works as both a sake exporter and educator. He’s one of the best known sake experts in the world, having written six books and hundreds of articles on the topic. He co-founded the world’s first sake-only magazine, Sake Today, in 2014. More recently, he launched an English-language insider newsletter called Sake Industry News. He regularly teaches the popular Sake Professional Course, an intensive seminar tailored to help distributors, restaurateurs, and other drinks professionals better understand sake. He’s also picked up many challenging certifications over the years, including the Brewing Society of Japan’s Master of Sake Tasting and Japan’s National Research Institute of Brewing’s prestigious Sake Expert Assessor.

Gauntner is quick to point out, however, that these accolades, certifications, and decades of experience do not equate to mastery.

“I’ll study this until I die and I still won’t know jack! But that’s cool because you never, never, never get bored,” he says. “But if you’re going to write about it, you should at least learn a few things about it. Or learn what you can. I guess I’ve always had this sense of mission, how to convey this huge, deep, fascinating, vague world, how to somehow convey it to the masses.”

In some ways, he’s fallen into the role of sake ambassador because he was in the right place at the right time speaking the right languages. Nowadays, there are oceans of information freely available in English about sake, but when Gauntner first began his evangelism, there was little to no English information and the internet certainly wasn’t the border-defying wellspring it has become. There was a need for someone who could bridge the communication gap for non-Japanese speakers.

“The first time I did [an English sake seminar in Tokyo], I was like, ‘I have no idea how this is going to turn out. But it needs to be done,’” he recalls. “I wished I had these kinds of seminars when I got to Japan… [back then] I look around and I have no idea what to drink. How do I know what to do?”

So he became the kind of educator he wished he’d had, translating the history, culture, and science of sake, first to Tokyo’s expats and then to an ever broadening audience as sake began taking off abroad.

Beyond his Japanese ability, the role of sake educator is one he’s well suited for. He’s clearly a talker, the kind of effortlessly affable people person who can really hook an audience. And an ability to explain things logically, perhaps a legacy of his engineering education, makes him an effective communicator, particularly when covering the basics.

But Gauntner has come to see the job in much broader terms, particularly as general information about sake has become widely available. Now what he’s trying to convey goes much deeper than definitions of daiginjo and junmai, as he tries to foster the kind of long-lasting affinity with the sake industry that sustains both drinkers and producers.

Never a Clear Answer with Sake

One thing he focuses on is what he calls maintaining the vagueness of sake.

“With a lot of things in the Western world, and I guess wine to a significant degree, everything is black and white. If you have a question, there’s a very clear answer to it,” he explains. “With sake, there is no question to which there is a clear answer.”

Learning to embrace this vagueness is something he sees as key to fostering that long-lasting relationship with sake. In fact, he begins his sake course by introducing three rules: vagueness rules, there’s an exception to every rule, and someone will contradict what they are learning within a week. With sake you can only answer a question with a caveat, he says. Traditionally or legally, there may be a standard or commonly accepted explanation, but someone is always subverting those norms. There’s always a sake defying the expectations or its classification, grade, or region.

“If you are going to get into sake, you need to remember that. Otherwise, you’ll get frustrated,” he says. “You are never going to have a completely clear grip on something about sake. There are too many exceptions, too much vagueness… And that’s the beauty of sake. That’s the appeal of it.”

At the same time, understanding the norms and having a good grounding in fundamentals is what enables you to appreciate those outliers, as well as the depth and subtlety in the mainstream. So Gauntner calls another major facet of his sake communication ‘being a guardian of the orthodox.’

With increased interest in sake and craft brewing, sake are more diverse than ever before. Brewers are experimenting with new yeast strains that produce powerful and unexpected aromatics, milling rice down to almost nothing, aging and carbonating different kinds of sake, cask aging, freezing rice, and more. If you can imagine it, someone is trying it to make a sake.  While this innovation opens up exciting possibilities, it can also make it more difficult for new fans to develop a good frame of reference for sake as a category.

“If you like it, it’s good. There’s nothing wrong with anything,” Gauntner clarifies. At the end of the day, these are drinks made to be enjoyed. But if you want to understand sake more fully, you need to have a solid foundation in what traditional, orthodox sake taste like and how they are made.

“The main styles of sake are the way they are because they have proven to be what humans wanted to drink for the last 800 years,” says Gauntner. Ginjo is historically newer than that, but a slightly chilled junmai ginjo usually exemplifies the sort of classic sake—one having a subtle flavor profile without exaggerated sweetness, alcohol, or acidity—that has stood the test of time.

Which is not to say that there isn’t variety in the mainstream, but in Gauntner’s opinion it’s a question of subtle depth rather than broad range. An appreciation of that depth requires lots of experience to train your palate to the nuanced striations in the flavor profiles.

Maybe that’s a paradox. On the one hand, fans need enough experience to craft a working definition of what sake is. On the other, they have to accept that that definition will always be slightly off, unable to encompass the full complexity of sake. But as the old adage about the journey and the destination suggests, the enjoyment of sake isn’t in pinning down a definitive understanding, but in the drinks along the way.

As Gauntner says, “It’s the deepest rabbit hole you could ever imagine.” But what fun it is to fall.

HOME > John Gauntner: Learning to Love the Vague and Unfathomable