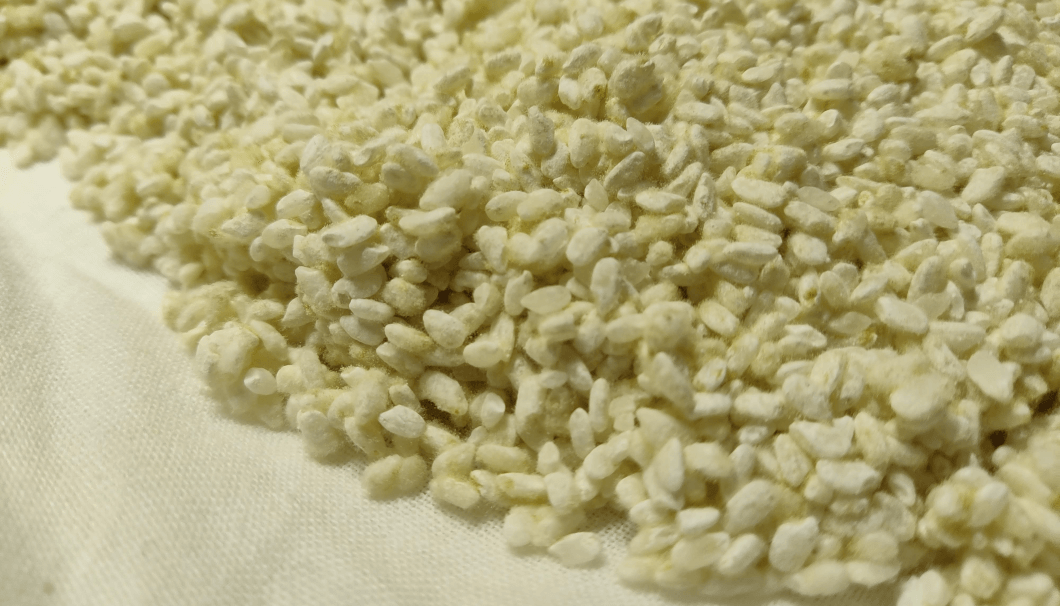 The Fuzzy History of Koji

Koji is so important to sake-making it’s been called Japan’s “National Fungus,” but its origins are murky.

Sake lovers know the essential role koji plays in sake brewing. The mold’s enzymes transform the starches locked in rice into sugar needed for fermentation. But koji is also seeing a much larger boom these days with cookbooks and events such as “Kojicon” that bring together chefs and other professionals who use the mold for pickling, charcuterie, and other culinary experiments.

Koji’s powdered form, called koji kin or tane koji, can be dusted on meats or fish to dry-age them. Other culinary uses require spreading the powdered koji on steamed rice in a manner similar to sake brewing, carefully controlling temperature and manipulating the koji rice by hand to propagate the mold. People willing to invest the 40 to 60 hours to do this can create an amazing flavor enhancer. Adding the prepared koji to water and salt creates shio koji, a seasoning that can easily boost umami in dishes. Heating prepared koji with water makes amazake, a sweet non-alcoholic beverage that can also be used as a sweetener.

With all the attention koji is getting, many are wondering about its history. One go-to guide for koji cooking, Rich Shih and Jeremy Umansky’s Koji Alchemy: Rediscovering the Magic of Mold-Based Fermentation (2020), dates the domestication of koji to 9,000 years ago, pegged to the time when the Chinese started planting rice. This theory makes sense since koji is a mold that naturally grows on rice. However, rice plays only a small role relative to other grains in the history of koji. And koji can exist without rice in other plants and in soil; and you don’t need rice to make koji.

What we call koji can refer to many different molds used for fermentation. The Chinese word for koji is qu, of which there are several kinds. Daqu is made from wheat, barley, or peas. Fuqu uses wheat bran, and xiaoqu is made with rice. When the Chinese started growing rice, they also domesticated millet, and they utilized malted grains including millet for brewing. Pot sherds that date to 7,500 to 9,000 years ago from Henan Province suggest evidence for alcohol made with fruits and honey. In short, rice koji was only one method among many potentially used for brewing in early Neolithic China.

The powdered koji that sake brewers use is also only one of its forms. Japanese specialists call this “loose koji” (bara koji), reflecting that it’s applied to steamed rice as a powder. Apart from Japan, where use of loose koji predominates, people in Taiwan, Indonesia, and Nepal also use it. However, in East Asia the most frequently used types of koji come in different forms. “Cake koji” (mochi koji), a variety most often used in alcohol production in China and Korea, is made from wheat or barley softened with water to make a dough that’s shaped into a small brick. “Grass koji” (kusa koji) is used in China and other regions of Northeast Asia and the Himalayas. The name comes from the powdered leaves and bark, mixed with a grain flour such as sorghum, that facilitate mold formation. Grass koji is formed into small dumpling-like shapes.

The most important distinction in these types of koji is the mold that they produce. Loose koji produces variations on the Aspergillus mold: yellow for sake, white for shōchū, and black for awamori. Cake and grass koji propagate molds from the genera Mucor and Rhizopus. Aspergillus oryzae thrives better and is more successful in breaking down proteins in steamed rice than its rivals, so it is best suited for sake making. But that does not fully explain why this type of koji predominates in Japan while other types of koji figure larger in the alcohol produced in China and the rest of Asia.

Koji’s importance not just to sake but also to miso, soy sauce, pickles, sushi, and other Japanese foodstuffs is undeniable to the point that Aspergillus oryzae has been dubbed Japan’s “national fungus,” but when and how that type of koji became dominant in Japan is a point of heated debate. Did koji arrive in Japan with wet paddy agriculture 3,000-4,000 years ago, having originated in the Yellow and Yangtze River areas of China some half a millennium earlier? Perhaps. The mold may have hitched a ride with rice to Japan, but the techniques to create loose koji and use that for brewing could well have arrived later from someplace else. Unfortunately, we know too little about the history of alcohol in Japan to answer that question.

Chinese records of the third century CE describe how the people living in the Japanese islands loved alcohol, but what they drank is a mystery. Archaeological evidence indicates that ceramics for steaming rice existed at that time, and these were necessary tools for sake brewing. So, it’s possible that koji was used for brewing long before possible references to the mold appear in Japanese sources in the eighth century. But it’s a lot easier to make alcohol with fruit, and wines made from elderberry or wild grapes (Nihon yamabudō) may date to Japan’s Jōmon period (c. 15,000-900 BCE). A third possibility is that the earliest sake was made by chewing rice and spitting the contents into a container, relying on saliva, not koji, to break down the starches into sugars for fermentation.

So, when was koji domesticated? Anyone who has left a slice of bread out too long knows that mold has its own agenda, regardless of what we might want. Fortunately, by carefully controlling the temperature, deftly manipulating the koji growing on rice, and deploying other techniques, sake brewers have mastered how to create an environment where
Aspergillus oryzae thrives. When and how this first happened may never be known, but sake lovers can rejoice that it did.

HOME > The Fuzzy History of Koji