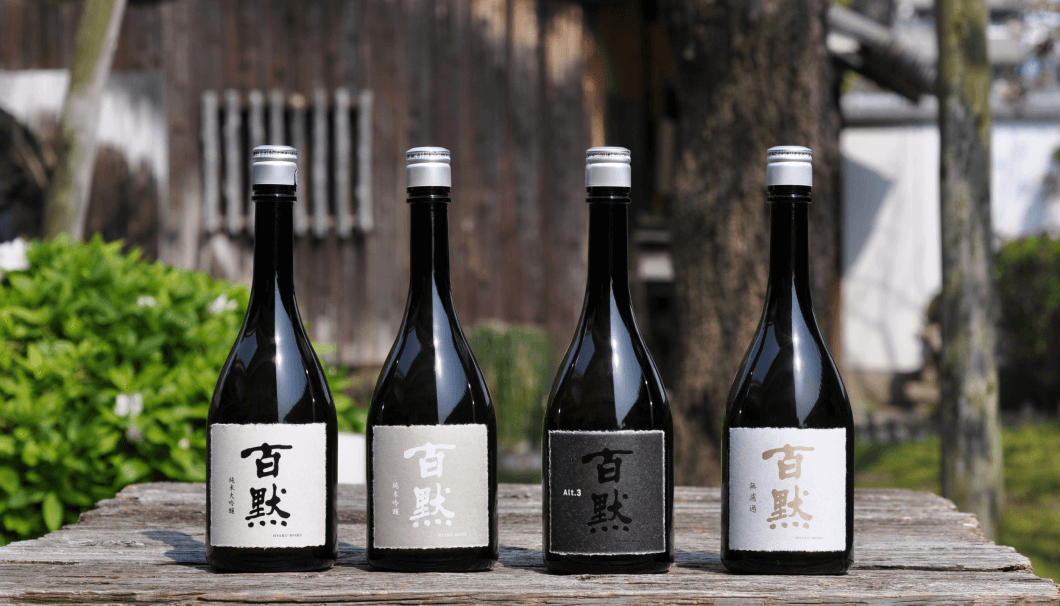 Hyakumoku: A Bold New Release from a Centuries-Old Brewery

How a big-name producer broke with tradition for their new brew.

Hyogo Prefecture produces more sake than anywhere else in Japan, but one place in Hyogo has long stood out from the rest: Nada-gogo, or “The Five Villages of Nada,” is home to some of Japan’s most famous breweries.

The Kiku-Masamune sake label is one of Nada-gogo’s most well-established brands. The brewery behind it, Kiku-Masamune Sake Brewing, has been in business since 1659 and first released their eponymous signature brew in 1886. One hundred thirty years on, sake fans throughout Japan and beyond still regard Kiku-Masamune as the face of kimoto-style dry sake.

In March 2016, this historic brewery, now a major player in the sake industry, embarked on an audacious new venture with the release of Hyakumoku, their first new brand in over a century and a radical departure from the label that established their name. With one iconic sake already under their belt, what made Kiku-Masamune venture into fresh territory?

Silence Sometimes Says the Most

Daisuke Miyauchi of Kiku-Masamune’s sales division spoke with SAKETIMES about the genesis of their new label.

“Cold-served sake and local brews have grown more prominent in recent years, while warmed sake and big breweries have dipped in popularity. It’s tempting for people to dismiss low-cost sake or sake sold in supermarkets, but the reality is that Kiku-Masamune is also one of Hyogo’s local brews. Out of frustration with this situation, we decided to put everything we had into creating Japan’s best cold-served sake.”

Elaborating on the ethos of this unprecedented new sake, Miyauchi identifies four core elements to the Hyakumoku brand.

The first is that it’s made by a youthful team of brewers in their twenties, thirties and forties. These hungry up-and-comers, Miyauchi says, hope to ensure the new brand will last for more than a hundred years, just like Kiku-Masamune’s eponymous brand before it.

The second is a commitment to using only the finest rice. Hyakumoku uses 100% Yamadanishiki rice sourced from the Kano farming collective, exclusive rice suppliers to Kiku-Masamune Sake Brewing. The Kano collective grows these precious grains on special A-grade rice paddies, officially recognized as some of the best in Japan.

The third element is the company’s forward-looking approach to brewing. In pursuit of their goal — creating Japan’s best cold-served sake — the Hyakumoku team have abandoned the dry kimoto style of Kiku-Masamune and set out to develop an entirely new production process from scratch.

The fourth core pillar is simple: Maintaining a clear vision.

Miyauchi explains: “In this information-saturated age, consumers are faced with a bewildering array of sake labels and producers. Yet in their competition to outdo one another, breweries often take the customer for granted. Instead of trumpeting the quality of our sake, perhaps we ought to let the sake speak for itself. That was one of the ideas that came up in the development of this brand.”

While such a modest approach may seem counterintuitive at first, there is a solid rationale at work; namely, the consumer should be allowed to experience a sake for themselves, uncolored by preconceptions. The name of this new sake label itself reflects just such a mindset. Hyakumoku derives from a Japanese proverb, “Hyakumoku-ichigon,” or “one word, a hundred silences.” This compact phrase expresses the idea that few words carry greater weight than many.

A Fitting Ambassador for the Region

“Hyakumoku is very popular around here,” says Yoshihira Otsuji, owner of the Kakogura sake store in Hyogo Prefecture. Like many others, he’s a vocal supporter of Kiku-Masamune’s newest endeavor.

Otsuji is also an admirer of Hyakumoku’s predecessor: “As a classic dry sake, one of the best things about Kiku-Masamune is that it pairs well with cuisine. That’s why it has always been popular at traditional Japanese restaurants. Being a sake researcher myself, I really identify with this brewery’s diligent approach and their investigation into sake’s role in Japanese food culture.”

Hyakumoku, however, is a radical departure from the classic dry style of Kiku-Masamune. Otsuji recalls his first encounter with the new label.

“Hyakumoku… has introduced a new concept of blended sake. This is an exciting development that broadens the sake’s potential. Japanese cuisine is growing more popular overseas — it even has world cultural heritage status. As part of this trend, I hope that Kobe’s Nada-gogo region will also become famous worldwide as a sacred spot for sake. I want to [help promote] Hyakumoku as one of the top sake labels from our region.”

Hyakumoku has another supporter in Kensuke Imai, president of Hi No Maru Grocery, a sake trading company that runs a specialist store, Gin Shizuku, in Kobe City. Ever since he set up shop in 2006, Imai has taken an active interest in procuring local Hyogo labels from smaller breweries. He had little interest in sake from the big players until Hyakumoku arrived on the scene.

“When I first heard about Hyakumoku,” says Imai, “I wasn’t particularly interested… But all that changed when I actually took a sip. I was amazed that a major brewery could produce this kind of quality.”

Hyakumoku isn’t just making waves in Japan. The brand has also found a warm reception in overseas markets like America and France. In 2019, Kiku-Masamune Sake Brewing commemorated the US launch of Hyakumoku with a sumptuous food pairing event at the Michelin triple-starred French restaurant Per Se in New York City. The event featured expertly crafted pairings with three different varieties of Hyakumoku.

The pairings proved a hit with guests to the event. One attendee, a staff member at another New York City restaurant, enthused, “As a sake lover, I think sake absolutely pairs with non-Japanese dishes. The Junmai Daiginjo [version of Hyakumoku], in particular, went fantastically with the uni.”

And the praise continued with ebullient comments from a staff member of a Japanese restaurant: “The amberjack marinade went great with the refreshing citrus flavors of the Junmai Daiginjo. The Junmai Ginjo is a good match for mellow flavors, while Alt. 3 goes well with rich dishes. Using all three, I imagine you could find a successful pairing for practically anything.”

The upshot is that, while Hyakumoku and Kiku-Masamune differ greatly in flavor, they do share some common DNA — both are quintessential mealtime sake labels with apparently great pairing potential.

The New Face of Nada-gogo

Prior to the release of Hyakumoku, Kiku-Masamune Sake Brewing mostly sold their wares to Japanese restaurants and izakaya Japanese pubs. Their new label, though, is finding favor with a broader range of clientele including French and Chinese restaurants.

Brimming with enthusiasm, Jiroemon Kano, president of Kiku-Masamune Sake Brewing, set out his vision for Hyakumoku to SAKETIMES.

“One prominent feature of the Japanese sake market until now has been the uniform ranking of sake according to rice polishing ratio. But if sake is going to compete internationally, we need to introduce new value-adding concepts like terroir and maturation. My hope is that Hyakumoku will become a source of pride for the people of Hyogo, and that our new brand will inspire sake fans from Japan and abroad to visit our prefecture.”

With Hyakumoku gathering steam, Nada-gogo may soon occupy the same rarefied position as Bordeaux or Tuscany in the hearts of international gourmands.

HOME > Hyakumoku: A Bold New Release from a Centuries-Old Brewery