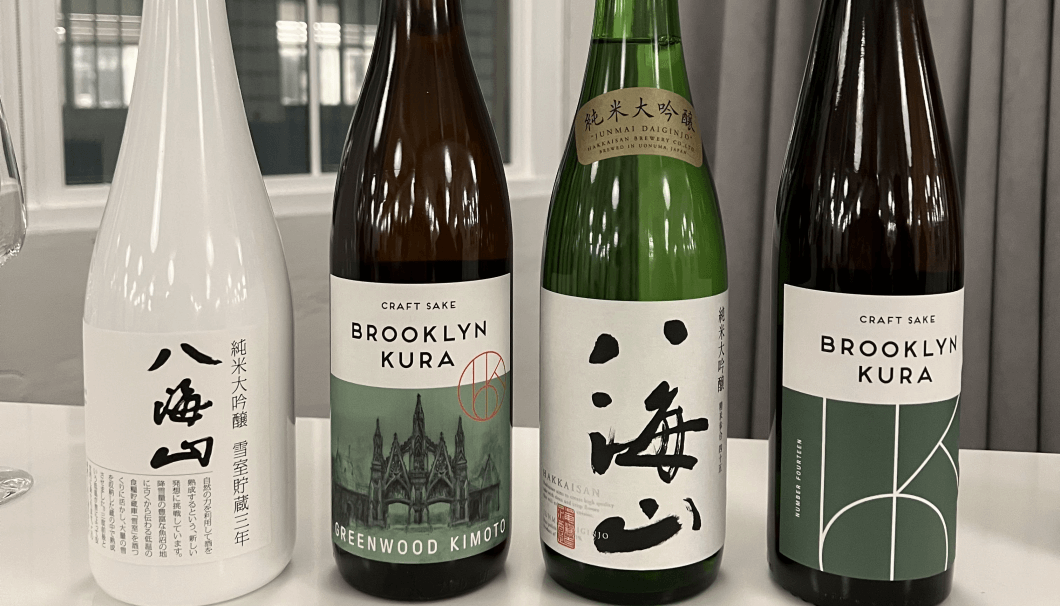 Hakkaisan x Brooklyn Kura: Working Together for the Future of Sake

A Japanese and an American brewery form an international partnership

In December 2021, Niigata Prefecture’s Hakkaisan Brewery, producer of the popular Hakkaisan label, and New York’s Brooklyn Kura announced that they would be joining forces to form a business and capital alliance.

With sake exports on the rise and new breweries opening throughout the world, what led these two producers to embark on this long-term partnership?

SAKETIMES spoke to Shinsuke Sasagawa from Hakkaisan Brewery’s sales division and Brooklyn Kura co-founders Brian Polen and Brandon Doughan to learn more about the background and objectives behind this historic partnership.

Contrasting environments and a shared philosophy

Hakkaisan Brewery, founded in 1922, celebrates its centenary this year. Located amidst the lush natural surroundings of the sacred Mt. Hakkai, this famed brewery produces the Hakkaisan label, a sake renowned for its tanrei karakuchi; a crisp, dry quality commonly found in Niigata sake.

The United States is Hakkaisan’s largest foreign market, accounting for more than half their total exports. Since the company began shipping overseas in 1995, their efforts to build a sake culture bridge between the U.S. and Japan may well have gone a long way to expanding the U.S. sake market.

Years later, Hakkaisan would learn that a brewery would be opening in New York. This was their introduction to Brooklyn Kura, which opened its doors in 2018 to become the state’s very first sake brewery.

“At Hakkaisan Brewery, we make sake in the beautiful, natural surroundings of the Uonuma area of Niigata,” says Sasagawa. “By contrast, Brooklyn Kura is located in Industry City near Manhattan [a business complex incorporating historic former factories and warehouses]. When I first visited their brewery, my initial thought was, ‘Are they really brewing sake in a place like this?'”

Later, Polen and Doughan paid their own visit to Hakkaisan Brewery. Doughan, the co-founder and head brewer of Brooklyn Kura, reflects on their trip: “When Brian and I first visited Hakkaisan, we weren’t thinking about a partnership. At first, we were just impressed by their beautiful campus in such a beautiful part of Japan.”

At first glance, these two breweries, one located in a rural setting and the other in a sprawling metropolis, may look like polar opposites. However, after forging ever closer ties over the course of three to four years, the two breweries realized that their philosophies weren’t so different.

“Although we are based in completely different environments, both breweries share an attitude to business development rooted in our local regions,” says Sasagawa. “Brooklyn has a young population that is tuned in to the arts, and Brooklyn Kura is promoting sake with this audience in mind. Their brewery has a taproom where visitors can go any time they like and communicate directly with the producers. At Hakkaisan, we too aim for this kind of friendly and open approach.”

Polen, the other co-founder and President of Brooklyn Kura, shares this sentiment: “It was very easy to identify that Hakkaisan Brewery, like ourselves, is obsessed with making sake a global beverage. They are willing to take the risks, develop new products, try and fail, and share a very similar ethic and philosophy to Brooklyn Kura in the way that they approach their production, sales and distribution.”

Emphasizing that the move to form a business partnership was not initiated by either side, Polen says it was instead a natural and organic process.

“It’s just been this very natural discussion about where we see the sake brewing industry, what steps we want to take to bring new customers to the industry, and how we uplift the broader community of sake breweries in addition to our own businesses,” Polen concludes.

As their relationship developed, the decision to form a collaborative union came naturally to Hakkaisan Brewery and Brooklyn Kura. This move was spurred on by problems facing the two breweries.

“Alcoholic drinks like whisky, wine and beer were all originally imported to Japan from overseas,” says Sasagawa. “However, the rise of local Japanese producers with clear objectives was a key element in the acceptance and popularization of these drinks.

“On business trips to America, we became painfully aware that Americans were not yet familiar with sake. We could see there was a need for locally targeted promotion and local networks. Through speaking to Brooklyn Kura, we felt that a partnership would help us to address this issue more quickly.”

In the United States, Brookyn Kura were facing their own difficulties accessing information and materials for sake brewing.

“We know that we’re going to be introducing a lot of people to sake for the first time, so we want our product to be true to what sake is,” says Doughan. “When I started off learning, I was doing everything in isolation. I was reading a lot, watching any video of techniques that I could find, and then increasingly going to Japan to meet with other breweries.

“I think some of that is valuable, in that we’ve discovered some things on our own. But also, working with Hakkaisan Brewery and being able to ask them questions about things I’ve been puzzling over for a long time has been extremely valuable,” he continues.

“I’m very humbled to be working with Hakkaisan and their multiple generations worth of knowledge. With this partnership, it’s like another world of knowledge is opened up to me, and I want to put all that into the effort of improving our sake.”

With these complementary objectives, the partnership between these two breweries has seen mutual benefits for both parties in many areas, from production through to marketing and exports.

The potential of marketing and education

As part of their joint activities, Hakkaisan Brewery and Brooklyn Kura are planning the creation a new sales division covering both brands and worked together in the future to expand Brooklyn Kura’s production capacity.

The two breweries also plan to develop new products together such as craft beer, spirits and fermented foods. This is in keeping with Hakkaisan’s typically wide-ranging approach as the brewery already boasts its own beer, whisky and amazake line-ups.

“This is the first time Hakkaisan has formed a partnership with another company, either domestically or overseas,” says Sasagawa. “In the course of forming close relationships with our overseas partners, we have seen the need to accept cultures that are different from our own, while at the same time having those partners accept Japanese culture.

“As an overseas brewery, we want to learn new ideas and methods from Brooklyn Kura. Brooklyn Kura is a new company, so they are moving forward very quickly. We are excited to have this sense of forward momentum and hope to learn about new worlds we have never seen before.”

The two breweries also have plans to educate American consumers about sake and fermentation.

Polen explains: “Talking to people about sake in different ways, from the perspective of a traditional Japanese brewery and our perspective as a young U.S. based sake brewery, is going to allow us to have pretty compelling conversations with people who are new to sake or experiencing sake for the first time.”

Working together to promote sake globally

This international collaboration between Hakkaisan and Brooklyn Kura may point the way forward for the sake industry as a whole. As Polen says, “We want to have an impact on the global sake world, and we want to see sake exports from Japan grow quickly. When we talk to distributors and retailers, we’re not just talking about our own sake. We’re talking about sake as a category.”

Sasagawa adds, “This will likely be a long-term project, but through this collaboration, we hope to turn sake into a standard choice that is readily available to purchase in stores or order at bars and restaurants throughout the world.”

By utilizing Brooklyn Kura’s existing overseas network, Hakkaisan Brewery stands a good chance of opening up their sake to a wider audience internationally. And as opportunities to drink sake increase, overseas distribution looks set to expand outside the typical confines of Japanese restaurants.

This partnership may also precipitate further collaboration between Japanese and American breweries.

“I’m hoping this encourages more sharing between Japan and the United States or other countries,” says Doughan. “It is challenging for someone in the United States to start a sake brewery as far as equipment and access to knowledge goes, particularly when you don’t speak Japanese.”

Polen is hopeful that the partnership will also have a positive effect on the Japanese sake market.

“We have received a lot of positive attention and interest in our products from distributors in Japan, and we’re hopeful that having a product like ours in the local izakaya [Japanese pubs] in Tokyo will motivate people to rediscover sake in Japan.”

“Ultimately, and this is what I think will be challenging for other partnerships, we share the same goals,” says Polen. “And the benefit is that we’re talking to people who we trust and we respect and are working towards solving the same problems. There are all these other practical benefits, but ultimately it’s about the relationship.”

Two countries working together for the future of sake. Through this exciting new collaboration, Hakkaisan Brewery and Brooklyn Kura are expanding the possibilities of sake. This may well prove to be a significant development in the positioning of sake as a global beverage.

HOME > Hakkaisan x Brooklyn Kura: Working Together for the Future of Sake