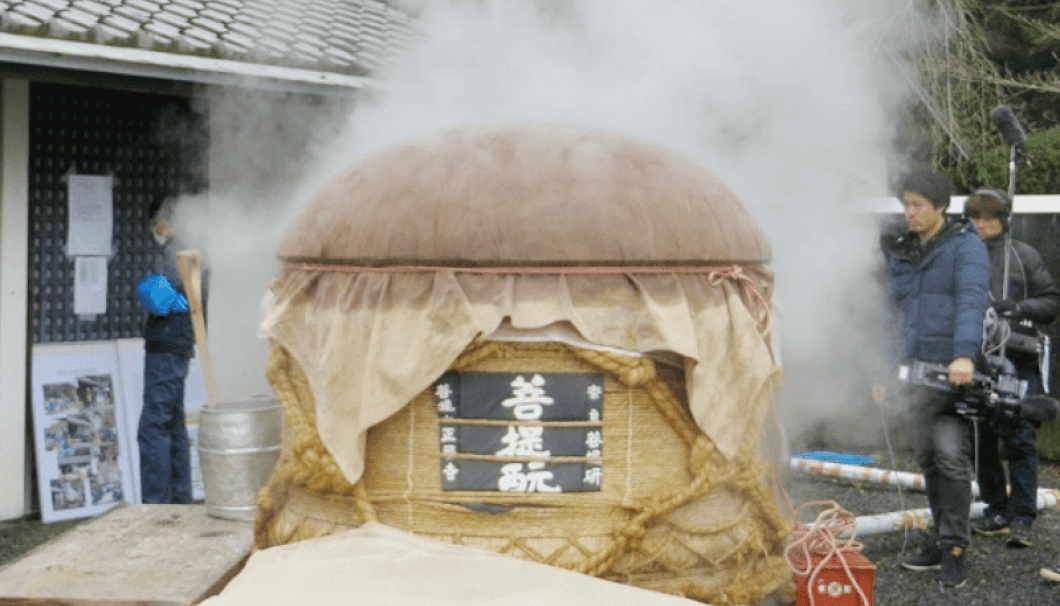 Bodaimoto: The Renaissance of the “Enlightened” Starter

Some brewers are returning to the traditional bodaimoto starter method that naturally cultivates lactic acid.

Today, almost all sake brewers add a dose of lactic acid to their sake starter yeast, and the only time that they will inform consumers of this technique is when they aren’t doing it. Lactic acid, after all, has something of a reputation; it’s one of the bad actors behind sore muscles and even tooth decay.

But lactic acid has a more benign side. Lactic acid bacteria ferments milk into yogurt and gives it its sour taste. In Japan, traditional types of sushi are made by lactic acid fermentation. Add cooked rice to salted fish in water and wait months or years to make fully fermented narezushi. Eat this sooner and it’s called “fresh fermented” (namanare) sushi. The fish won’t spoil because the lactic acid, produced from the materials soaking in the water, acts as a preservative by lowering the pH and inhibiting microbes that could cause illness. And, as in yogurt making, the lactic acid ferments the fish.

Since it staves off dangerous microbes, lactic acid provides an ideal medium for the growth of something that can tolerate acidity, such as sake yeast. Today, most sake makers simply add a dose of lactic acid to their starters to create an environment for their yeast to thrive. In contrast, sake labeled yamahai and kimoto use naturally cultivated lactic acid produced by soaking rice and koji in water. This technique is an adaptation of an earlier method called bodaimoto, literally “enlightened starter,” in which only the rice is soaked.

Bodai is the Japanese rendering of the Sanskrit term bodhi, meaning the awakened wisdom of a Buddha. Then, is bodaimoto a starter (moto) that will awaken the yeast? Perhaps. But the term is more certainly a tribute to the deep connections between Buddhism and sake brewing in Japan.

The first description of the bodaimoto method appears in a recipe for a sake style called bodaisen in the oldest manual for brewing, Sake Journal, which may date to as early as the mid-1300s. The text indicates to cook (probably steam) rice, allow it to cool, then place it in a bamboo basket, and soak it in water for three days. Sake Journal directs both the water and the rice to be used in the next stage of brewing. The author of Sake Journal may not have understood the science behind how lactic acid bacteria break down the starches in the rice into lactic acid in the water, but they would have known that the sour-tasting water provided a safe medium for fermentation. Lactic acid sushi existed in Japan by at least the eighth century and the technique to create lactic acid was probably known to sake brewers by then as well, centuries before it appeared in Sake Journal.

Other recipes in Sake Journal also provide descriptions of how to produce lactic acid naturally by soaking rice, and while the text itself never gives a name to this process, the connection between it and the sake bodaisen probably inspired the name bodaimoto. Bodaisen derives from the temple Bodaisen Shōryakuji, located five kilometers south of Nara City. Shōryakuji was a branch of Kōfukuji temple in Nara and helped to support its parent temple financially by brewing and selling sake. Buddhist monks were supposed to renounce intoxicants, but medieval temples were very good at business, and sake provided a lucrative way to turn rents paid in rice into a marketable finished good. Temples like Amanosan Kongōji (Osaka) and Tamonin (Nara) became famous for their sake, but Shōryakuji goes so far as to claim on its website that it is the birthplace of sake. Even though it’s highly unlikely Shōryakuji invented the bodaimoto method or sake, which existed in Japan centuries before the temple’s founding in 992, the associations between Shōryakuji, sake, and bodaimoto go back more than half a millennium.

The connection between Shōryakujiand bodaimoto has only grown stronger in recent decades thanks to a small group of sake makers in partnership with the temple who formed a research group in 1996 to revive the method. Two years later, the Nara prefectural government granted the temple a brewing license. Lacking the facilities to make its own sake, the temple partners with nearby breweries. Each January the brewers produce a bodaimoto starter on the grounds of the temple and take that back to their respective companies. The small-batch sake they market with a golden seal of authenticity is then sold at the temple. Interestingly, the bodaimoto method currently used at the temple uses raw rice in contrast to the one described in Sake Journal that calls for cooked rice.

The rationale for reviving bodaimoto at the temple, according to the research group’s statement on their website, was to “restore and raise the status of Nara sake.” In other words, their scheme is similar to the strategy of brewers in other prefectures who have established local designations as a way of promoting their brands. Brewers in Nagano and Saga, for example, mandate the use of rice and water from the prefecture to qualify for their regional designations. While the bodaimoto sake that starts its life at Shōryakuji is brewed with water from the temple, the method itself was ubiquitous to sake brewing up to a century ago. So, the bodaimoto research group would face considerable hurdles if it attempted to trademark bodaimoto in the same way that vineyards in the Champagne region in France monopolize use of the term Champagne for their signature sparkling wine.

For consumers, bodaimoto sake offers a taste of a historical technique and a reminder that even “traditional” methods change with the times.

HOME > Bodaimoto: The Renaissance of the “Enlightened” Starter