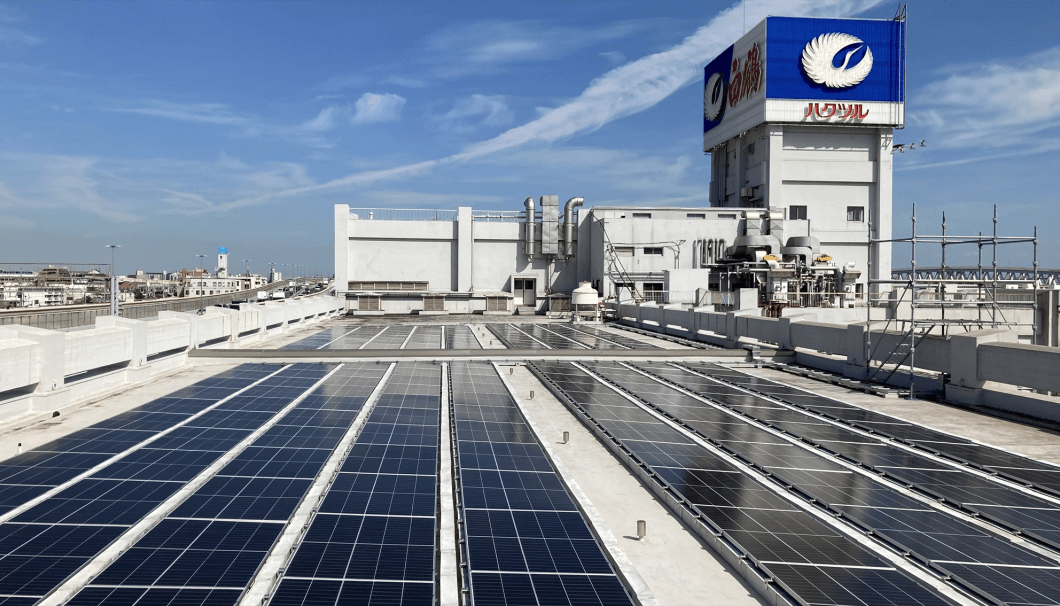 In the news this week: Hakutsuru is going even greener with an array of solar panels on their largest brewery. Then, people can’t seem to get enough of Gekkeikan’s non-alcoholic sake drinks, so they’ve created a new, dry version to keep up. Finally, World Sake Day is taking off in the US with attendance for two major events selling out.

Major sake producer Hakutsuru announced that they have installed 381 solar panels atop their largest brewery in the famous Nada region of Kobe City, Hyogo Prefecture, Japan. The effort is the latest in a series of environmentally-friendly measures taken by the company over the past decade.

The brewery to be powered by this system runs year-round and is responsible for about 40 percent of Hakutsuru’s products, including brands like Maru and Josen Hakutsuru.

In 2015, the company set up 1,176 solar panels on top of their massive bottling plant located near the brewery. Prior to that, the brewery installed more energy efficient equipment to help reduce the production’s impact on the environment.

The change is a part of the company’s overall commitment to several Social Development Goals, including the Good Health and Well-being, Gender Equality, Clean Water, and Responsible Consumption and Production goals laid out in the UN’s mandates.

Although leading sake producer Gekkeikan first released a version of non-alcoholic sake back in 2014, the company has announced that sales of their alternative beverages have skyrocketed since December of last year.

According to the brewery, sales have tripled over the course of 2021 and are still on the rise. They say a number of factors are behind the increased demand, such as pandemic-driven restrictions on alcohol sales at restaurants and a generally growing health consciousness among consumers.

In response to this rapidly rising popularity, Gekkeikan has released a new version of its Special Free non-alcoholic, sugar-free, calorie-free sake-flavored beverage. Called Special Free Dry, it replicates a daiginjo flavor but with added bitter and sharp notes to give it a slightly less-sweet and crisper flavor profile than its predecessor.

In addition, the original Special Free has undergone an update in flavor. While still retaining its prominent sweet and fruity daiginjo flavors, the brewer has added amino acids to bring out a hint of umami.

With both drinks, Gekkeikan recommends enjoying them either as they are or mixed in a non-alcoholic “mocktail.”

World Sake Day events selling out in US

In Japan and around the world October 1 is known as World Sake Day because of its connection to the rice harvest, which is the first step in brewing sake. Breweries everywhere hold special events to network, raise sake awareness, and celebrate the art and history of sake.

One place where World Sake Day really appears to be catching on is in the United States, where two large-scale sake events have sold out well ahead of the biggest day in sake.

On September 25, Sake Day ‘21 kicked off in San Francisco to a capacity crowd. Now entering its sixteenth year, this four-hour event touted as “the biggest sake event outside of Japan” hosted a huge tasting selection of over 300 local and imported brands.

Then, on October 1, San Diego Sake Day 2021 will kick off with a traditional barrel cracking ceremony. In addition to a tasting of sake from Japanese and American brewers, non-alcoholic drinks along with foods both large and small such as sashimi and ramen will also be served.

Unfortunately, tickets to both of these events have already sold out, but the events, judging by their popularity, are sure to return next year.