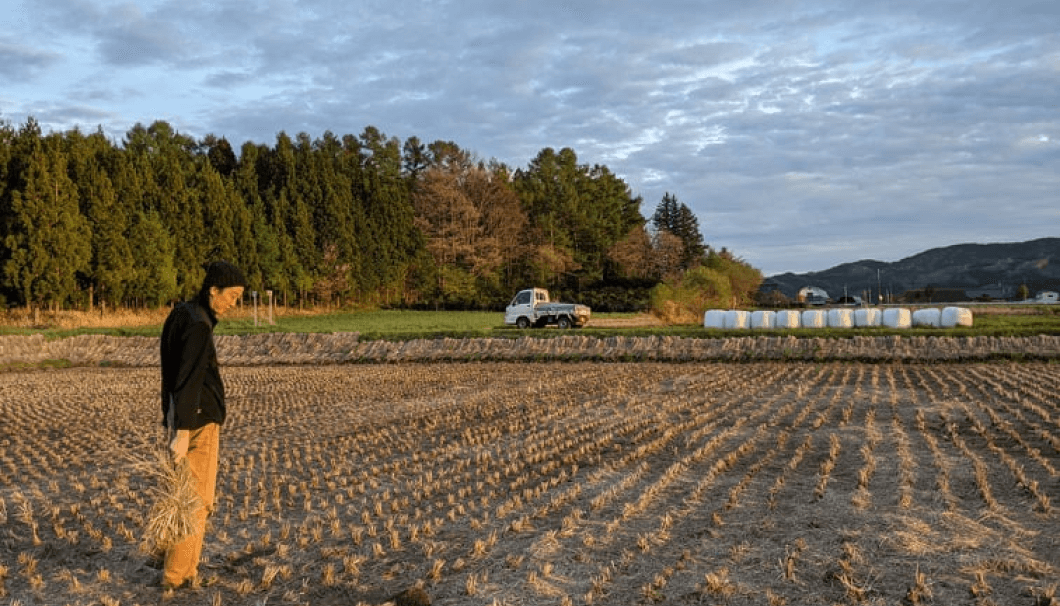 Rewriting the Rules of Sake, with Doburoku (Part 1)

“This rice here has been soaking for about two weeks now. It should be ready to be used in the next few days.”

It’s clear from the moment that Yotaro Sasaki begins to describe what’s happening in his brewery, which at first glance appears to be little more than a makeshift homebrewing operation, that things are going to be… unorthodox.

“The mash of this batch here is closing in three months. In some cases it often requires several more,” he continues.

In a matter of two casual remarks, Sasaki throws into question core fundamentals of the sake brewing process. What he’s describing flies in the face of basic brewing conventions held throughout Japan and elsewhere.

But, this shouldn’t be a complete surprise. The 40-year-old is transforming Japan’s perception of doburoku and the surprises in the brewery track with everything else witnessed in our 24-hours together leading up to this point. Sasaki’s doburoku is only one facet of the world that he has created in the idyllic countryside of Tono, Iwate Prefecture, where the foundation of his craft here has quietly made him an inspiration throughout the sake world, and a symbol of hope in agricultural and gastronomic spaces, as well.

His achievements didn’t happen overnight. In a world that worships speed as a prerequisiter to “innovation,” creating good things actually takes time, and Sasaki’s work in Tono is case in point.

The number of regions registered throughout Japan that now allow for the production of doburoku under the fantastically vague and increasingly permeable “Other Types of Brewed Beverages” brewing license is nearing 180 as of November 2021. But the city of Tono, nestled deep in the far northeastern region of Iwate, was legally the first.

While much more common now, back when Tono was first granted official Doburoku Brewing Region status in November of 2003 it felt like a miracle. In a country where homebrewing has been prohibited since 1899 and the requirements for starting a new sake brewery have bordered on impossible, many would-be Japanese brewers had given up on their sake-making dreams.

Brewing from the Ground Up

Knowing that the possibility to legally brew and sell his own doburoku was on the horizon, Sasaki set out to equip himself with the tools needed. He set out not just to make a tasty beverage, but to craft something that he felt confident was representative of the Tono region, and that contributed to the betterment of local agricultural practices. He was committed to rice cultivation being integral to his process. He needed to be confident that he was engaging in practices that were sensitive to the biodiversity of the region. But if he couldn’t also make sure it resulted in quality doburoku, Sasaki knew that the product would fail to adequately represent what he intended to be thoughtful agricultural practices.

“I’m the type of person that in order to convince myself I’m doing the right thing, I need to personally go through the process of engaging in not only the path that I’m hoping will prove to be the best option, but all of the alternatives as well,” explains Sasaki. “I spent three years cultivating rice across a number of fields, engaging in ranges of both standard and unconventional growing practices. I grew rice in the way most farmers do in this country, respecting yield but not the soil, but also worked organic rice fields alongside fields that would go above and beyond the conventions of organic.”

“It was obvious from looking at the quality of the rice, the impact on the land, and the resulting quality of the doburoku that growing rice using conventional modern practices was not the path forward,” asserts Sasaki. But while the results were clear, the method was not.

“At first I tried modeling my growing methods after that of [Masanobu] Fukuoka. What I realized was that what he’d accomplished was absolutely incredible, but it didn’t work here.” Sasaki discovered that the climate, soil and natural dynamics of Tono are a different world from that of Ehime, on Japan’s southwestern island of Shikoku, where Fukuoka developed his methodologies. He needed to develop a local solution for what natural rice cultivation in Tono could, and arguably should, look like.

He began by using Akita Komachi, a common rice variety from the neighboring prefecture, but Sasaki wanted something with roots someplace closer to home. The problem, however, was that the options just weren’t there.

On further research Sasaki stumbled upon records of Tono Ichigo (Tono #1), a table rice variety bred and released in 1939 that had fallen out of favor as more crop varieties appeared and national tastes gradually homogenized in the years following WWII. Tono Ichigo eventually disappeared from the cultivation landscape entirely. Managing to procure a mere 5 grams of preserved seed, Sasaki planted and, over several years, expanded cultivation until finally, in 2008, he had enough to actually use in the production of his doburoku.

Sasaki committed to growing and reestablishing Tono Ichigo as a variety that flourished through cultivation methods that went beyond organic, entirely free of agrichemical inputs or fertilizers. The rice thrived, which isn’t a huge surprise given that it was a variety selected specifically for its compatibility with the qualities of the region prior to the wide-spread proliferation of agrichemicals. Tono Ichigo was, essentially, back in its element.

Walking through the fields with Sasaki an evening in early Spring, just prior to rice planting season, his attention turns to the easy-to-overlook fauna of the fields.

“My fields can’t thrive without spiders,” he says. “The more the better.” Sasaki peels back layers of the bundles of dried out rice stalks from the previous season intentionally scattered along the periphery of the field, and sure enough, reveals a breeding ground for an array of arachnids. “These do wonders to preserve the balance of biodiversity in the fields. As long as they’re here I know we’re on the right track”.

He then gestures to a neighboring field where the coloration of the soil is a much lighter shade of brown and is almost sandy in composition.

“The soil here has had the life sucked out of it. It belongs to another grower in the area. I’ve been trying to get him to let me take it over but he’s just not having it for some reason. Nothing will grow in it anymore and it just sits. It would probably take years to get it back to being just merely functional,” he laments.

It’s through this gradual process of using his own fields as both test dummy and proof of concept that he’s gradually been able to convince more and more growers in the region to adopt his practices and grow his variety of choice, Tono Ichigo. What began – and still largely remains – a one-man operation – has slowly expanded to include contract farming that Sasaki helps to oversee, turning that precious crop into prized and respectably priced doburoku. It in-turn then sustains the local rice farming community.

The Luxury of Sake, the Challenge of Doburoku

The doburoku that Sasaki makes, branded as simply “Tono Doburoku,” is priced above that of most other doburoku (and sake) on the market, but it’s far from outrageous.

“It differs by style, but my doburoku is generally around 2,500 yen (about $20 USD) for a 500ml bottle,” he explains, “which isn’t really all that expensive. It’s merely priced in accordance to the work involved in making it sustainable for everyone in the process. I’m not trying to say hard labor is better, it’s merely in line with the time and energy of the work. There’s ridiculously expensive machinery out there that could certainly make my life a bit easier. I’d gladly adopt some of it if I could afford it,” he concedes with a laugh.

But even with the best rice-growing practices in the world, if the quality of the doburoku itself falls short of expectations all is for naught. Having now spent nearly 20 years cultivating the rice fields that sustain his product, when Sasaki started he had another small challenge to contend with: He had absolutely zero brewing experience.

“In order to get licensed to produce doburoku you have to get a ‘Certificate of Completion’ from the Iwate Industrial Research Institute demonstrating that you’ve been instructed in the basic processes needed in order to safely brew a decent product, but you have to remember that when I went through the course was the first time anyone had been legally able to brew doburoku in generations. The very first day I went to take part in these training courses,” Sasaki says, grinning, “the very first thing that the instructor said was, ‘We don’t have any experience making doburoku. All we can do is teach you how to make sake.’”

Herein lies the contradiction at the crux of the issue that Sasaki was setting out to address, and that both the functional definition of doburoku and the sake industry as a whole had yet to step up and recognize.

Generally introduced as the ‘original’ form of sake, the thick, chunky nature of doburoku was the natural end-product in a world that didn’t yet have advanced tools and techniques to separate the rice solids from the liquid in the brew. Doburoku is often simply described as the sake mash itself that hasn’t been pressed, separated, or filtered, which in terms of how Japan’s National Tax Agency looks at it, is accurate. But dismissing it as “simply” unpressed or unfiltered sake has done a large injustice to doburoku, selling the beverage category short while also resigning it to second-tier status in the eyes of sake drinkers. Sasaki suddenly gets very serious when elaborating on this juxtaposition.

“The general perception is that doburoku is a more ‘simple’ or ‘primitive’ form of sake, but what people don’t realize is that having the option to press the mash is actually an incredible luxury.” He continues, “Sake breweries are able to select the precise time that they want to press, essentially capturing the sake in its ideal state. We [doburoku makers] don’t have that luxury. We’re making a living thing that, even when complete, keeps on living, and it has to be good – and remain good – every time. It requires a whole other level of planning. That’s why I had to build my entire process, literally from the ground up. I didn’t select my farming methods merely because they skewed more ‘natural’. I settled on it because I realized that it’s essential in order to create a style of doburoku that I could be proud of; not in spite of the production limitations, but because of them.”

Sasaki continued to visit the Industrial Research Institute regularly for nearly three years in order to glean what he could from the sake-making process and how best to adapt those skill sets to what he was attempting to create with his doburoku. But, eventually he hit a wall.

“After visiting for about three years but still having a lot of questions that remained unanswered,” recalls Sasaki, “one day when I went to meet with the technicians, they just straight-up told me, ‘Look, we’re really sorry, but there’s really nothing else that we can teach you. At this point we’d recommend you try to find an actual sake brewery that you can apprentice at. We have nothing else to offer you here.’”

It’s at this point that a series of serendipitous encounters led Sasaki to the mentor that would help him to establish the guiding principles that would form the foundation for all of his work to come. These principles would first inform his doburoku-making, but would extend to his approaches to rice-growing and to his experimental fermentation and culinary work, too.

HOME > Rewriting the Rules of Sake, with Doburoku (Part 1)