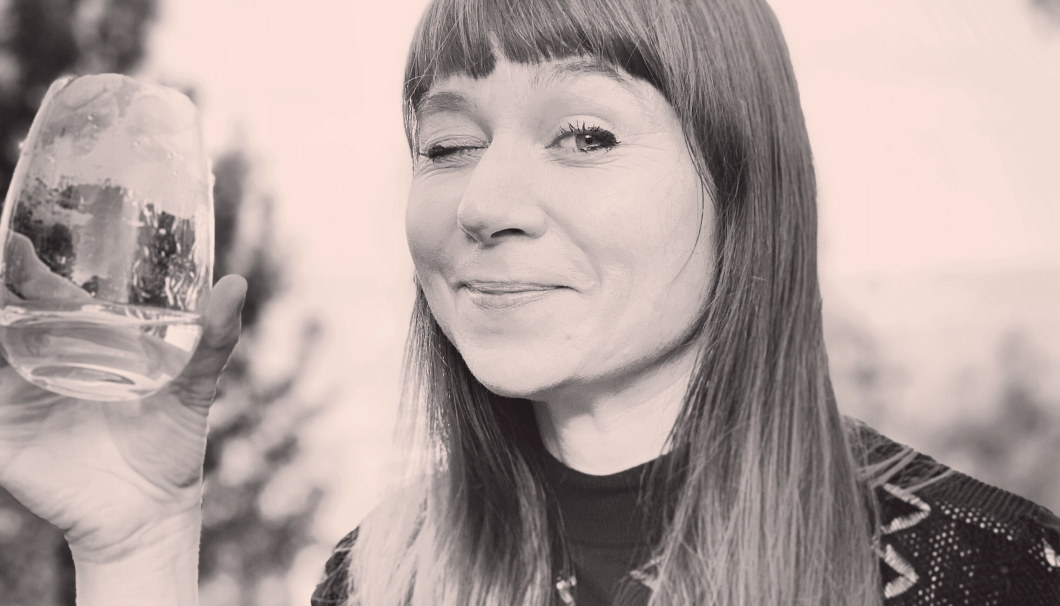 Simone Maynard, beaming in for a chat from her airy living room on the Mornington Peninsula, about an hour south of Melbourne, has the gravelly voice and dry cough of the recently recuperated. She looks a little worse for wear, but when the conversation turns to sake, she lights up with enthusiasm and the words positively flow forth. This infectious passion no doubt contributes to her success as the host of the popular Taste with the Toji online events.

Now in her 40s, Maynard came to sake education in a roundabout way. She first worked as a graphic artist for about 10 years after high school before transitioning to hospitality for the freedom it allowed for travel. A long-standing interest in Japanese culture, particularly visual mediums like woodblock printing and manga, brought her to Japan in 2003 for a fateful encounter.

“I’d already tried sake previously,” she says, meaning the warmed, low-quality futsushu available in Australia at the time, and she liked the ritual and the accoutrements but not necessarily the drink itself. But in Japan, she sampled premium sake, chilled sake, and aged sake, and it ignited a love affair that would change her life.

“[Sake is] so unique, it’s so versatile, and there’s even a bit of mystery to it,” she says. “The fact that you can taste certain sake and you think, how is this made from rice? You taste wine and you know that’s made from grapes. When someone gives you a pinot noir grape and a glass of pinot noir, you can instantly taste the connection. But if you eat sake rice and you taste a sake that’s made with it, there’s so many different things at play.”

The professional shift toward sake began in 2011 when she was asked to manage a new Asian fusion restaurant. The owner wanted to focus on sake rather than wine, so Maynard volunteered to put a menu together. She began educating herself in earnest, devouring any resources she could find and connecting with Andre Bishop, one of Australia’s leading sake authorities.

Once her menu was set, she began evangelizing to the patrons, breaking down misconceptions and repairing the damage done by unfortunate first-time sake experiences like her own.

“[I tried] to win them over by saying, ‘Okay, look, just forget everything you know about sake. Forget what you’ve tried. What I have here for you tonight is something very, very different, and if you don’t like it, I won’t charge you for it.’ Making them think, you know, I’ve got nothing to lose by doing this, so I’ll give it a go,” she recalls.

More often than not, it was successful.

“Seeing people’s response to the sake I was giving them back then… That gave me a lot of joy. Because I could see that they were quite excited to try something new,” says Maynard. “That was a really great experience and, probably for me, the start of what I’m doing now.”

Maynard continued her exploration of sake, visiting Japan many times and taking both Certified Sake Professional courses as well as the WSET and other certifications before becoming a full-time sake educator herself under the name ‘Sake Mistress.’  Drawing on her connections in hospitality, she held staff education events for hotels and restaurants looking to add sake to their menus, as well as private dinners and tastings. She also collaborated with local food producers like cheesemakers and mushroom farmers to hold events showing that sake could be paired with things other than Japanese cuisine.

Then COVID hit, bringing in-person events to a halt and closing restaurants to patrons for nearly four months during Melbourne’s second wave, which ended up being one of the longest and strictest lockdowns in the world.

Maynard had to call off all her events, as well as a planned trip to Japan to apprentice at a brewery, leaving her without work and thoroughly discouraged.

“I probably spent about two weeks feeling a little despondent and uncertain of how I could keep working with and promoting sake through this lockdown, which didn’t look like it was going to end any time soon,” she recalls.

Then, she was speaking with Imada Shuzo, which had just released their innovative henpei (flat polishing) and genkei (original form polishing) sake in Australia. She suggested holding an online tasting event with brewmaster Miho Imada and brewer Andrew Russell. This would become the first Taste with the Toji (TWTT) session.

The event was intended to be a traditional guided tasting, but once everybody got online, that quickly went by the wayside.

“They just wanted to ask Miho and Andy questions,” Maynard recalls. “Everybody was feeling a bit, I guess, shocked by how quickly the pandemic had all happened and just unsure of what the future held. So I think a lot of people let loose that night, in the company of fellow sake enthusiasts, in a space that felt safe. What was scheduled to be a 2 hour session went well beyond that with Miho and Andy gracefully staying online with attendees for around four and a half hours!”

That direct and unfiltered communication seemed to be just what people were looking for, though. In the days following the event, Maynard received plenty of positive feedback and requests to host similar events in the future. Soon, trailblazing female brewer Rumiko Moriki of Moriki Shuzojo volunteered to be the guest for the second TWTT. She shared her story of unexpectedly having to take over the family brewery and being supported by so many in her community, moving some to tears.

So rather than a didactic approach, the sessions became a place for brewers to share personal narratives in a casual atmosphere and for fans to speak directly to sake makers and brewery owners. Over the last two years, a host of volunteers, including Japanese-English interpreters, have been attracted to the project, keeping it free for participants. Maynard feels this is important during a pandemic, when many people have lost work, particularly those in the food and beverage industry. Attendees are just encouraged to buy a bottle of a participating brewery’s sake to support them.

Maynard also wanted to motivate the brewers by showing them just how many people their work was touching.

“Some of the core community of this TWTT group often talk about sake as a friend. It’s more of a friend than just a beverage. It’s like every time you drink a sake, especially if you’ve seen one of the brewers or kuramoto (an owner of a sake brewery) on these stories and you’ve listened to what they have to say, that when you are drinking that sake, you are shaking hands with that person, you are connecting with them on a different level,” Maynard says. “I feel like I’ve found my tribe through this because most of the core community have this same kind of relationship with sake and this same passion.”

TWTT is now nearing its 80th iteration. Regardless of what happens with the pandemic, Maynard is planning to continue the events in some form, expanding the scope to include guests in the wider sake ecosystem like koji makers and rice growers. As she puts it, not only people who are doing remarkable things with sake, but people who help sake be a remarkable thing. However, her focus remains on the stories they have to tell and their potential to forge meaningful connection.

Says Maynard, “I think for me, I’ll leave all that textbook stuff to others who are better qualified than I am, but through doing this project, it’s made me realize that it’s not just a label on a bottle and a product inside that bottle, it’s people’s livelihoods, it’s their tradition, it’s their heart, it’s their soul. And if, in some way, this project can play a small role in helping them to continue that or helping to stop just one brewery from closing, then I want to keep doing it.”