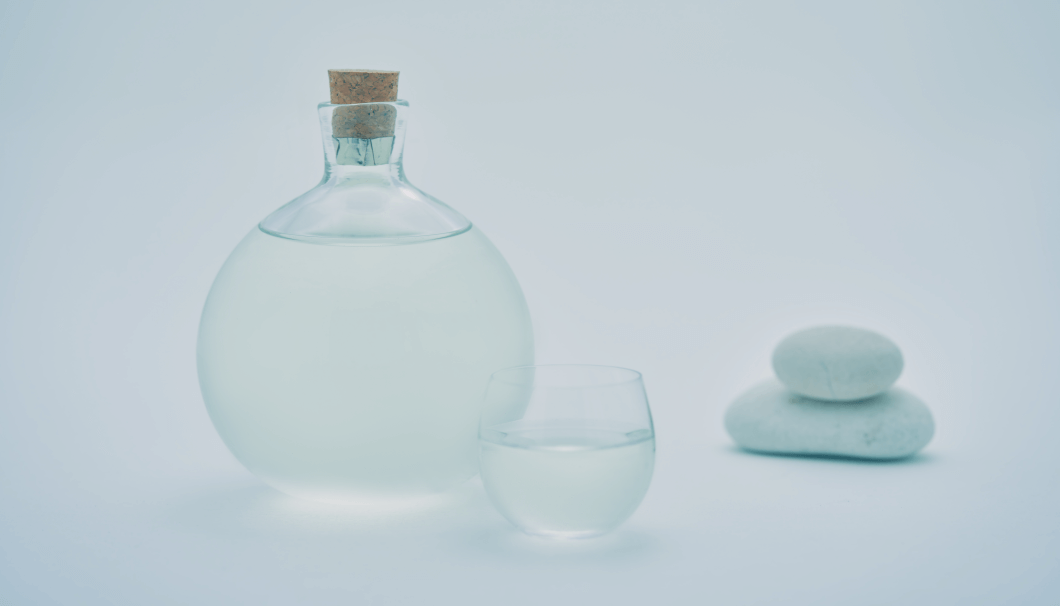 In the news this week: Aged sake gets the art museum treatment at a new online gallery. Then, the magic of sake rice is captured in a tea that’s said to go well with Japanese cuisine. Last, the techniques behind brewing sake may get “Intangible Cultural Heritage” designation from the UN.

As the name suggests, Kitamura Sake Exhibition acts more like an art gallery than a typical online sake retailer. On the site, each aged sake is carefully curated and treated like a work of art

The first work on display is Aquetha by Tsukasabotan, produced by Tsukasabotan Shuzo in Kochi Prefecture. This sake has been uniquely aged at a constant temperature of -5°C (23°F), which creates a slow convection that mixes the water and alcohol molecules more evenly. This bestows a mellower taste and look than other aged sake. In fact, a bottle of Aquetha is so clear that it might be mistaken for a bottle of regular sake at first glance, the company boasts.

The container itself is handmade from blown glass, which means that every bottle is one-of-a-kind with its own unique texture. Only 300 bottles of Aquetha will be sold for 33,000 yen (US$287) each from the Kitamura Sake Exhibition website.

Yasufuku Matashiro Shoten, a sake brewery in Hyogo Prefecture’s famous Nada region, has used sake rice to develop a tea titled “88,” which is read as “Hachijuhachi” in Japanese.

Yasufuku Matashiro Shoten came up with the idea for 88 when decision makers at the company pondered that those who don’t drink alcohol have no way to experience the joys of sake pairing. Other soft drinks are often too sugary or carbonated and can disrupt the subtle flavors found in Japanese cuisine like sashimi.

So, they took the core ingredient, Hyogo’s famous Yamadanishiki sake rice, and instead made a tea out of it. As luck would have it, sake rice’s hardy characteristics make it great for tea and sake alike. Through experimentation, Yasufuku attempted to capture the qualities of a junmai daiginjo sake by giving their tea a light, translucent appearance and by enhancing the flavors of sweetness and umami over the pronounced bitter notes of many teas.

In addition to being a non-alcoholic drink that can complement foods that sake is known to pair with, 88 is also lower in caffeine than other teas.

Yasufuku launched a crowdfunding campaign on February 23 and within a day received  four times their target amount in pledges. They are currently approaching pledges amounting to 10 times the initial target and expect to begin shipping around the end of March.

“Traditional alcohol making” incorporates the skills involved in making sake, shochu, and awamori, all of which stem from techniques established over five centuries ago. The development of these skills have involved exploring Japan’s environment and its impact on flavors, accumulating into techniques still used today.

This newest proposal will be submitted to UNESCO by the end of March, but is likely to remain on the docket for up to a year and a half before final consideration.