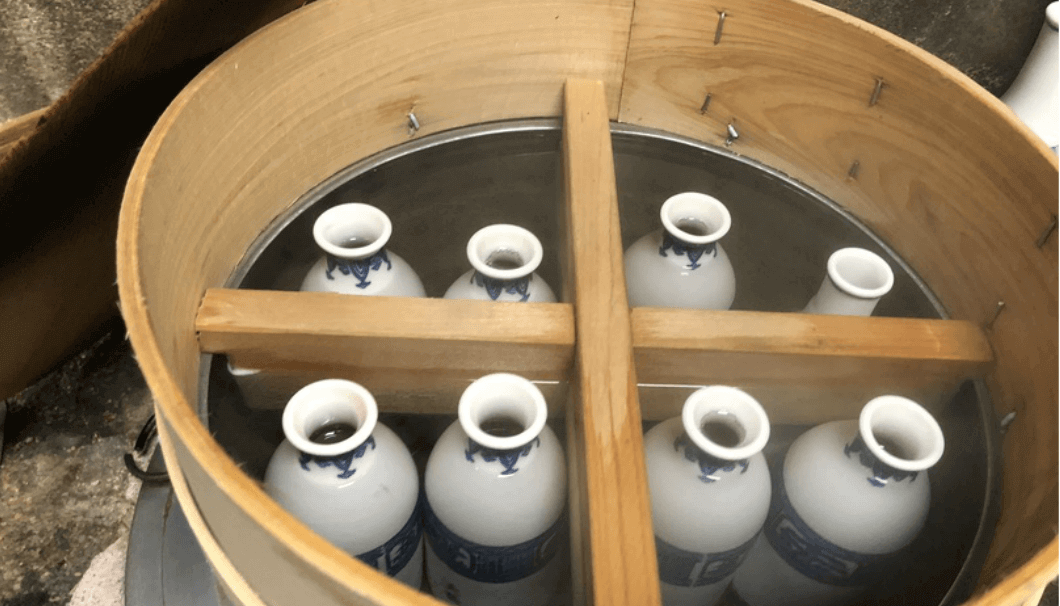 Drinking in Tradition: A Short History of Izakaya

The history of how sake gave rise to Japan’s famed and unique gastropubs.

One of the most enjoyable places to consume sake is the traditional Japanese gastropub known as an izakaya, literally “an establishment to sit and drink sake.” The interior of an izakaya provides a much cozier atmosphere than a typical bar, and often with a more diverse array of foods, from sushi to appetizers to heartier dishes. And, of course, many brands of sake usually pack the menu for guests to try.

Izakaya have made some headway outside of Japan since the 1980s, but the history of this casual and fun eatery can be traced back more than 250 years in its native Japan and has even earlier roots, interlinked with the history of sake, dating to fourteenth-century sake shops called sakaya. Sakaya both brewed and sold sake. A typical medieval sakaya used hundreds of ceramic vessels to make and store the drink. To keep their sake pots safe from falling over, brewers sunk the 250-liter (66 gallon) vessels into the earth for stability. Since the sake pots couldn’t be moved, customers who wanted to buy sake had to visit the sakaya and bring their own containers to fill.

Kyoto had several hundred sakaya in the late medieval period (1400-1600), and the competition among them must have been fierce. So, it’s plausible that some of the sakaya owners might have tried novel gimmicks to lure in customers — such as offering free samples or serving salty snacks like pickled vegetables. These tactics would have encouraged customers to stand around drinking and eating in the sakaya; and that’s standing in a literal sense, as sit-down dining wouldn’t spread for some types of eating spots in Japan for centuries.

But, sitting down is certainly a more comfortable way to enjoy sake, and the first reference to a “seated sake seller” (izake) dates to the end of the 1600s. By that time, many sakaya had stopped making their own sake. In 1657, the central government required brewers to purchase licenses, which created a barrier for those who wanted to start making sake. Consequently, many sakaya in Edo (now Tokyo) opted to sell sake instead of brew it, purchasing their sake from other parts of Japan, especially the area around the modern cities of Osaka and Kobe, which Edo’s connoisseurs judged as producing the best sake. By then sake makers had abandoned ceramic containers and adopted wooden barrels, using enormous ones for brewing and smaller barrels for storage and shipping.

“Seated Sake Sellers” were part of the diverse landscape of places to dine out and drink in late seventeenth century Edo. At the higher end were posh establishments that served food and entertained with courtesans in the city’s licensed quarter in Yoshiwara, but there were many less expensive shops that sold hearty grain dishes, as well as food stands and peddlers that offered bowls of noodles.

Dining out in Edo was often less expensive and certainly more convenient than cooking at home in the early modern period (1600-1868). Edo’s commoners lived in small dwellings where the cooking space occupied a narrow area just inside the entrance. Lacking tools for elaborate meals in such cramped quarters, many opted to simply make rice at home and purchase side dishes from outside vendors called niuriya (“simmered foods shops.”).

Around the year 1750, “seated sake shops” and “simmered foods shops” combined into a new business model, the “simmered foods seated sake shop” (niuri izakaya). The cumbersome term would soon be shortened to “izakaya.” This inexpensive establishment that combined drinking and eating quickly struck a chord with the populace. Within seventy years, Edo had 1,808 izakaya, making it the most numerous type of eating and drinking establishment in the city.

Edo-period book illustrations provide glimpses at what contemporary izakaya looked like. An image in the book A Tale of Hazakurahime in the Fourth Month (Hazakurahime uzuki monogatari), dating from 1814, shows an izakaya that provides both carryout and dining in services. On one side, fish and an octopus hang over large platters of simmered foods to catch the attention of passersby while on the other side customers lounge inside on benches partaking in sake and side dishes, drinking from ochoko cups, and pouring their favorite beverage from ceramic containers for heating sake called chirori.

Rather than advertise their sake by brand name, most early modern izakaya sold sake at different grades and prices. Customers ordered by indicating how much they wanted at what price. Izakaya also sold less expensive nigorizake and cheaper doburoku, an alcoholic beverage made with the same ingredients as sake but not to the same quality.

Today, it’s typical of restaurants in Japan to advertise the foods served with plastic replicas in their exterior windows. The izakaya in the aforementioned illustration with its menu items on display appears to be a pioneer in this practice. Another advertising tactic was to use a shop curtain made of multiple strands of rope called a nawa noren. The rope curtain kept flies away from the customers inside while at the same time letting in the breeze and allowing the delicious odors of simmered foods to waft outside and entice new customers.

The décor of izakaya today often evoke the long history of these gastro pubs. Many retain decorative curtains at the entrance and serve the simmered dishes popular all those hundreds of years ago. Even in today’s izakaya, one need only order a cup of sake to transport themselves to the bustling foodie metropolis of old Edo.

HOME > Drinking in Tradition: A Short History of Izakaya